by Mo Volans9 Aug 2010
Difficulty:IntermediateLength:ShortLanguages:
Mixing & Mastering
This post is part of a series called Creative Session: All About Compression.
How to Use Multi-band Compression in Mixing and Mastering
How to Set Up Side Chain Compression in Cubase 4

As many of you will know by now mastering is a subject with many facets. Learning how to successfully treat your tracks after your mix is complete generally requires a good amount of experience but some solid technique will get you going in the right direction.

To get this essential theory embedded I have decided to chop a typical mastering chain into nice bite-sized pieces. This way we can focus on each processor one at a time. At the end of the series we'll look at the whole chain in action. This tutorial looks at multi-band compression and what it can do for you during a mastering session.

If you're not familiar with multi-band processing it may seem a little daunting. For most beginners the sight of the average multi-band compressor plug-in is enough to send them running to the hills. In reality it's not as complex as you may think and these processors can be extremely useful.

Most DAWs now include some kind of multi-band processor (usually a compressor/expander) as standard. Although they may differ in look and layout, they all carry out pretty much the same function. If up until now you have felt that these processors are a little complex in nature it's time to dive in head first, as they can be extremely useful.

Simply put, if you can use a compressor then a multi-band version should present you with no problems. The average multi-band compressor is really no more than a number of compressors (often three or four) housed in the same plug-in. Each one of these compressors is then focused on a specific frequency band, decided by the user.

This frequency dependent compression gives you the ability to home in on specific instruments or areas of your mix and boost or attenuate them in a very accurate fashion. This sort of treatment often gives you a much more transparent result than equalisation.

In the following steps we'll look at the most common techniques for using these processors in a typical mastering environment. I'll be using Logic Pro's 'Multipressor' but any multi-band processor should be fine.

The first thing to master here is isolating specific frequencies. Most multi-band compressors have moveable 'bands'. These bands have upper and lower limits and a clear read out of the frequency you are using. This system is often combined with the ability to solo and bypass each band, so homing in on specific instruments should be pretty straight forward.

To demonstrate this I have used an existing loop and homed in on the snare. In the following clips and screenshots you can see the process used.

The loop used was produced entirely in Record 1.5 and imported in to Logic Pro 9.

The loop as exported from Record 1.5.

The Multipressor is then used to home in on the frequency where our snare's 'snap' resides.

The snare's frequency is isolated.

With the frequency of our snare identified we can start to treat it. First let's look at reducing its bite with compression. Simply bring the threshold down to a point where gain reduction occurs when the snare hits. No you can tweak the attack and release times to create a transparent compression effect.

It really is this easy. Once your compressor is firing correctly, you may want to fine tune the ratio and threshold amounts but you should find it very straight forward to treat your chosen area. This is just like using a standard compressor, same parameters, same results... just frequency dependent.

The snare is compressed.

The loop with the softer snare sound.

Another great way of using these processors is to boost certain frequency zones. Of course this can be achieved with an equaliser but using a multi-band compressor you retain a huge amount of dynamic control.

First the low end is targeted.

To demonstrate this technique I have boosted the high and low frequencies in level. I then applied enough compression to reduce these bands to around their original level. This may seem counter productive but it effectively reduces the dynamic range of your chosen band and ultimately makes it appear louder. 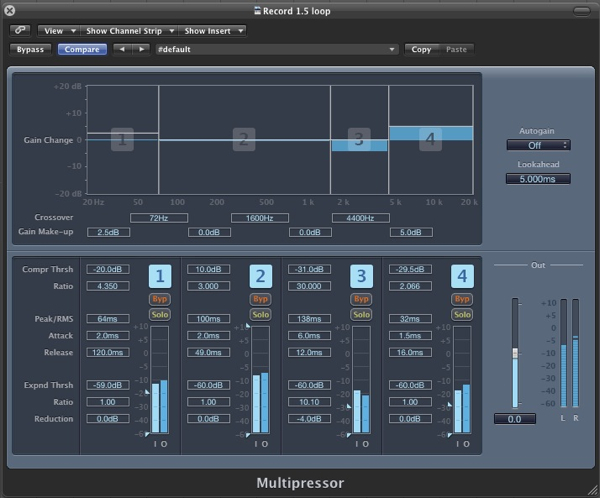 The low and high end are boosted and controlled simultaneously.

And with a bit of limiting for volume.