As we have learnt in the last four sections of this series, there can be many parts to a mastering chain. When I am mastering a track for a client or teaching the subject on a one to one basis, limiting and volume are often the first things I'm asked about.

Many people still seem to want 'super hot', ear bleedingly loud masters. Limiting is often how this effect is achieved, so let's take a look at how these processor produce these levels and what the side effects of excessive volume are.

This is a very in depth subject and I've tried to keep things succinct but it is a little longer than usual, so try to stay awake!!

The first thing to understand about the all important limiting phase of our mastering chain is that even small amounts of the process will increase the perceived level of a track. Simply put this means it may not actually read as louder on your meter but it will sound louder to the human ear.

This effect is created by a reduced dynamic response and relies on the fact we as humans judge volume using average levels. So cutting a very long story, very short... compress and limit your track more, reduce its dynamics and ultimately you will create a signal that sounds louder.

Below is the same file peaking at the same level, the first untreated and the second limited. Which is louder? Technically they are the same level but of course the second appears louder due to its reduced dynamic range. 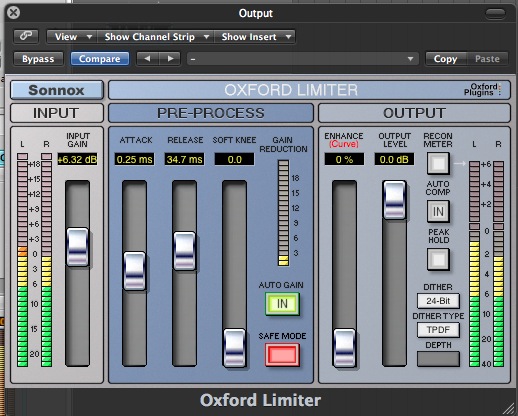 The Sonnox limiter used to treat the clips.

All seems pretty straight forward and innocent right? Wrong. Reducing the dynamics in our music does increase perceived volume but it also introduces distortion, moves us closer to the dynamic signature of noise and at the end of the day, it goes someway to removing the original soul and movement from our music.

Saying this, not all limiting is bad and don't let me make you think you shouldn't increase the levels of your masters. There is a halfway house here and you can create loud masters that still contain dynamics and don't leave you feeling like your ears have lost a fight with a rhino.

The trick here is to understand what you mastering limiter is doing and how it achieving its volume. As ever, understand the process and you'll start to think about how much of it you are applying. Let's look the different areas of limiting and listen to a few examples.

Most limiters that are intended to be used in the mix use a compression ratio of over 1:10. Anything above this is considered to be limiting of some form and this will often get the job done when applied to individual instruments.

These limiters may often have a pretty soft output limit and may not be 100% strict in their final levels. Mastering limiters however have to be exact and will often feature higher ratios and a totally strict control on the final level. These task specific processors are often know as 'brick wall' limiters.

It maybe that you are already using a brick wall type limiter already. When using plug-ins in your mastering chain it's always a good to idea to opt for something that is designed for the purpose. Check the manufacturer's website and the manual for you plug-in to see if its specification is up to the task of mastering.

Of course some plug-ins are quite obviously mastering tools and in some cases even their name gives this away. Reason's MClass processors are obviously intended for mastering and Izotope's Ozone is also an excellent suite of tools to get you started. For something a little pricier you might want to try Flux plug-ins, Universal Audio's precision mastering range and IK Multimedia's excellent T-Racks collection.

The UAD precision limiter is a slightly more upmarket option.

All these examples contain some form of brick wall limiter but there are literally countless other plug-ins to choose from on the market. You may even have one lurking in your DAWs bundled plug-in list. It's worth mentioning that sometimes a mastering limiter maybe called a maximiser. This is often a cut down, easy to use mastering limiter for simply increasing the inherent volume of your audio.

An audio clip with no limiting.

And with some Steinberg Maximiser applied.

Most mastering limiters achieve their effect by the in/out level being driven into the unit against a literal brick wall on the output section. The output can be fine tuned to a level it never goes over. Gain reduction then occurs when the signal is pushed against this virtual output barrier. In reality the input of these processors can be driven to a point where the gain reduction is so high that absolutely no dynamics are present, so it's worth taking care here.

The first thing to do when you start to use these limiters is to set your output level. By default they will generally be set to 0dB. In most cases this is fine, although some mastering engineers do prefer to go very slightly below this, so maybe -0.01dB. This ensures that absolutely no playback devices are clipped by the material.

With your output set you can start to drive the limiter using the input. As you do this your overall level will increase massively and once you hit 0dB and move beyond this point, you will get gain reduction, limiting and even more volume. This is where you need to go easy.

Generally speaking, 3-4dB of reduction in most situations is plenty. More than this and some material will start to suffer from lack of dynamic range and will become fatiguing to listen to and generally noisy. It's also questionable how much more volume you will juice after this point.

A good test here is to check if you have any dynamic movement. Keep a close eye on your metering and ensure that there is dynamic movement in your material. I you are in doubt get hold of a meter that includes dynamic range information, this will give you your actual perceived loudness in real time. 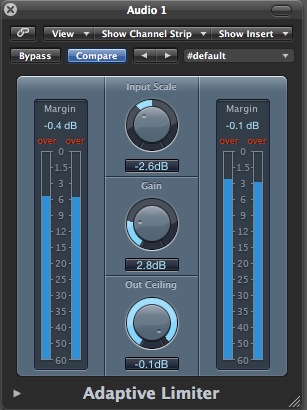 Other controls you are likely to find on a typical mastering limiter are attack and release. Some will only feature release and some will feature neither, it really depends on the manufacturer or designer. When you come across these parameters it's best to use longer times than you would during mixing.

I cant remember exactly where I heard it but someone once said (in connection with mastering dynamics) "...give me a compressor and limiter with attack and release times of forever and I'll be happy". This stuck with me and I started experimenting with long times and they really do work.

Longer times here generally result in more transparent, organic compression and limiting at the mastering stage and work well for me in most cases. Obviously every body is different and so are their projects, so you may want to try different settings and see what works for you. 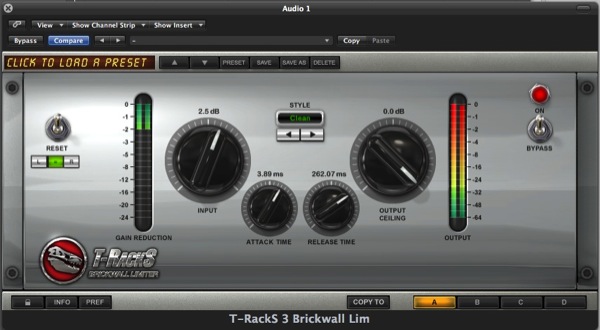 Some mastering limiters will offer extra features, usually at the end of their signal path, and these can include soft saturation and soft clip algorithms. This really means as you approach zero db and start induce gain reduction, or 'clipping', a tape like soft limiting will occur. This often adds extra harmonics and a warmth associated with analog tape machines.

Not all limiters have these features and they are seen by some as gimmicks but it's worth knowing what they are when you see them. As rule approach any enhancement process in your mastering chain with caution and do plenty of A/B'ing to check if what your adding is an improvement.

Some audio treated by Reason's maximizer.