You may not realize it, but the software or hardware sampler you own is likely to contain a powerful synthesis engine under the hood. If you haven’t explored it fully you may be missing out on a valuable resource in your studio.

Whether you are using a super flexible cutting edge soft sampler or a vintage hardware model, completing transforming your samples into brand new instruments and sound FX should be a breeze. So before you reach for a filter plug-in to treat your audio, it might be worth calling on your sampler for sound mangling duties.

We’ll take a look at some different samplers in action, and each example will show a different aspect of how to use your sampler as an effective synthesizer.

Step 1 - Using a Sampler as a Virtual Analogue Synth

At the most basic level your sampler can be used as an actual synthesizer and is capable of producing excellent pads, lead and bass sounds. All you really need to complete this exercise is for some simple waveforms to be loaded into your sampler’s memory. You can generate these using most sample editors or a soft synth.

To start with try a basic looped sawtooth waveform combined with a pulse width modulated square wave. By spanning these two samples across your keyboard you should be able to play it as a basic pitched instrument immediately. Raw waves tend to pitch shift very well and often don’t even need to be multisampled. From this point the possibilities are pretty much the same as most subtractive synthesizers.

To show you that creating a convincing synthesizer patch is really possible with any sampler, I have used an old Akai CD3000i to produce an analogue pad sound, using only the saw and pulse waves discussed above. This simple patch should be easy to create using any sampler you have in your collection. 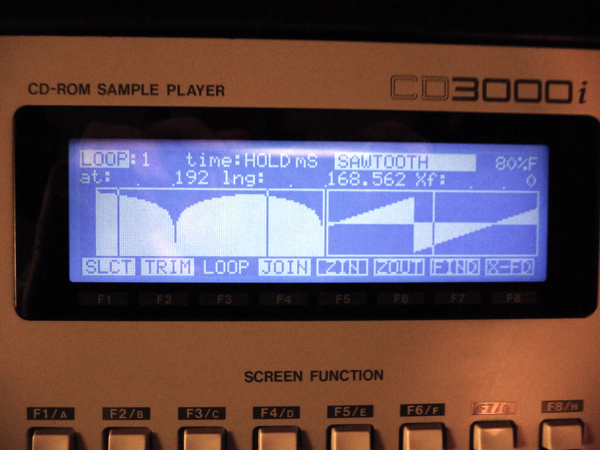 First up I created four keygroups in the Akai, two containing saw waves and two containing pulse waves. All this means is that whatever key I press these four waves will play together in unison. 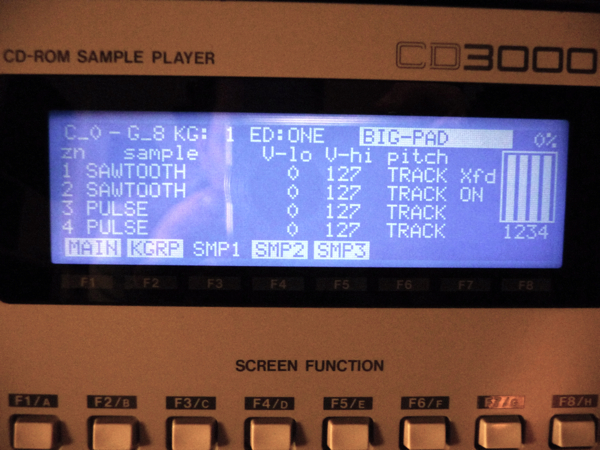 These keygroups were then panned and tuned at various intervals. The saw waves for example were slightly detuned and then panned to the hard left and right to create a wide chorus effect. The pulse waves were tuned a 7th apart and panned slightly to fatten the overall sound.

The whole sound was then filtered using a resonant low pass filter. As this sampler is pretty old now the filter options are limited to say the least but perfectly acceptable results are still possible here. The resonance has been cranked up and with a little work on the envelopes the sound started to come together. 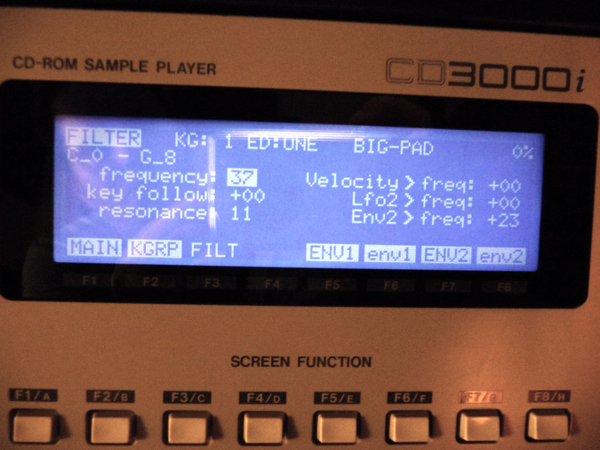 Both of the Akai’s two envelopes were used here, the first to control the amplitude and another the filter cutoff. Both envelopes were set with a long attack and release to produce the classic pad sound. It’s worth noting that no extra effects or processing were used here at all. What you’re hearing is simply some digital waveforms, filters and envelopes and nothing else. 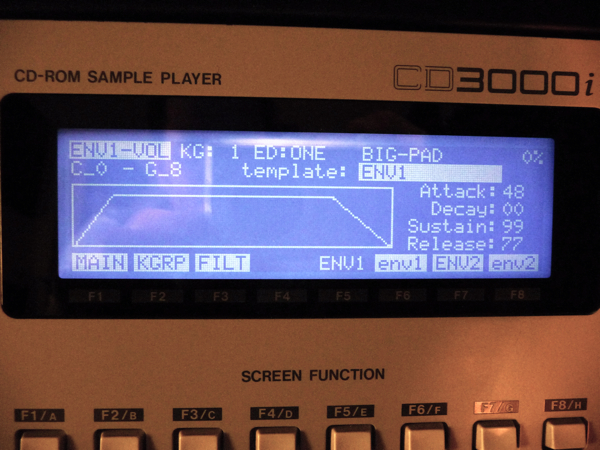 Step 2 - Getting the Most From Your Sampler’s Filters

We all know how easy it is to apply a filter plug-in to a piece of audio or sampled loop playing back in our DAW but although this approach is very quick it does have its drawbacks. In the majority of cases the filter’s output tends to have no relation to the actual sound being fed through it. In other words the filter’s cutoff frequency is static and does not react to the dynamics of the sound itself.

Of course some more advanced filter plug-ins do have envelope followers that allow you to create filtered sounds based on your sample’s dynamics, but there is a way to achieve much better results using most software samplers and REX files.

Of course for this to work, you will need to have some loops already in REX format, or you could build your own files using Propellerheads Recycle. Once you have some REX files ready you can start experimenting with some very interesting filtering technique.

Let’s take the EXS24 mk2 for example (the soft sampler supplied with Logic Pro 8). When a REX file is loaded into the EXS24 editor it automatically maps the files across the keys. It will also produce a MIDI file that will play back the mapped samples seamlessly. 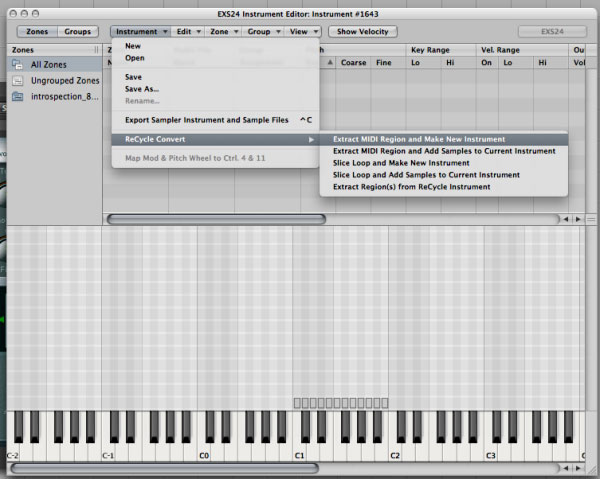 As the loop we are using is now split into many sections the samplers filter will ‘clamp’ down on each section as a separate sound. This essentially means that if you set up a filter envelope with a fast decay for example, you can generate acidic effects that tightly follow the dynamics of your sound. 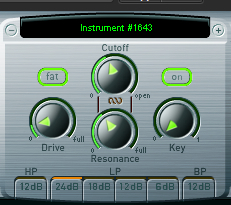 REX loop filtered in the EXS24mk2

A great way to utilize your sampler as a synthesizer is by taking advantage of its LFOs (low frequency oscillators). These can often be routed to numerous destinations within your sampler and also synced to your DAW’s BPM/clock.

Some good examples of this would be a sampler producing a synced vibrato or auto-panner effect. Here I have used two LFOs in Reason’s NN-XT soft sampler to create both of these effects. 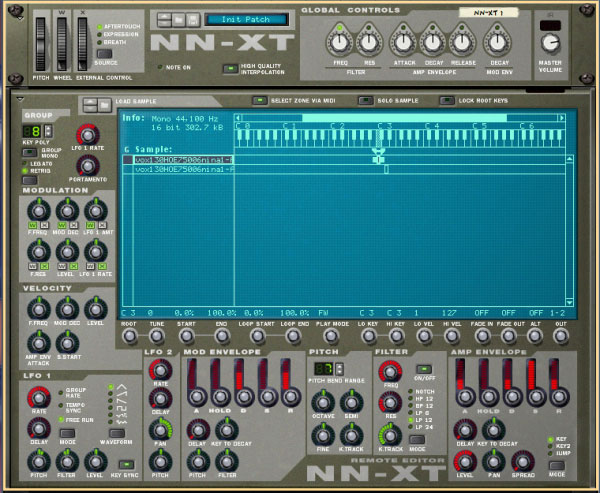 Some more powerful software samplers, such as Native Instrument’s Kontakt 3, are capable of semi modular routing. This means that you can place an LFO, envelope, filter, effect or controller just about anywhere in the sampler’s internal architecture.

When this was introduced, it represented a huge leap forward in sampling technology and allows nearly limitless manipulation of sounds. If you find yourself tweaking a sound within Kontakt and you like the result of changing a parameter continuously, it is very likely you can insert a controller and have it do the work for you.

This approach allows you a lot of freedom compared to some other samplers where some of the modulators are hardwired to destinations or only allow limited options. In this example I have used various modulators to completely mangle a sample to show you what is possible using only Kontakt’s internal synth engine. 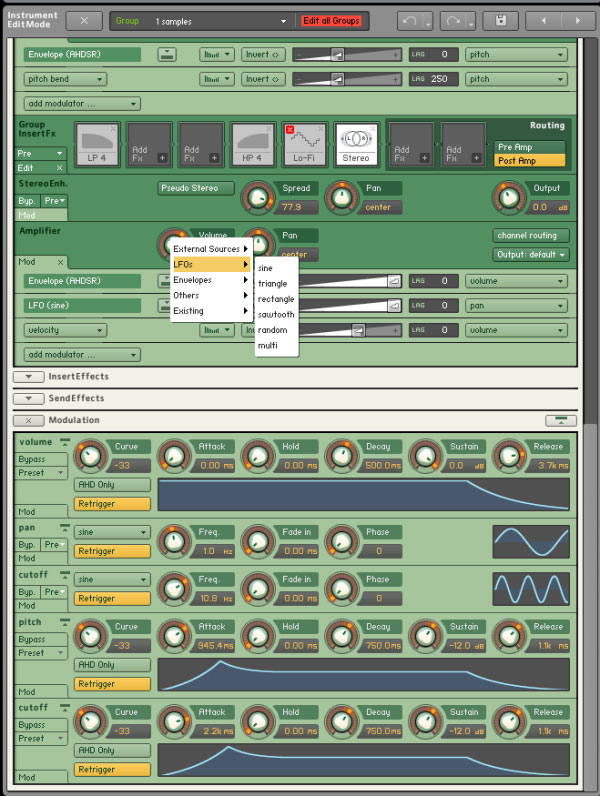