Maximize Your Workflow in Logic with Folders

I use Logic Pro quite extensively to compose and produce music. But one feature I never fully explored until recently was folders. I was aware they existed, but I just never seemed to have a practical use for them.

I decided it was time to dig in and find out what folders are all about, and share with you how folders can improve your workflow.

As described in the Logic Pro 9 Help file: "A folder is a region that can contain other regions, much like a folder in the Finder can contain other folders or files. In principle, you can edit folders as you would edit MIDI regions."

Let's say you have several regions in your arrange window:

If you select them all and go to Region -> Folder -> Pack Folder, you will then see the following result: 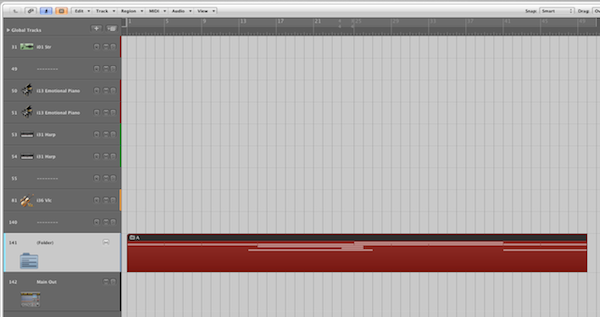 All of your regions have been packed inside a folder. The tracks still stay in place, but the regions are gone.

When you create a folder a new folder track is created with the folder acting like a region. You can edit this region just like any other, moving it around the timeline, copying it, cutting it in half, etc.

Now if you double click the folder you go inside, and you now have all of your regions:

What is interesting is that you only see the tracks that are being used, and the timeline only shows the bars that the folder is placed on. This is convenient for getting a closeup view of what you're working on, eliminating any clutter from view.

If you double-click on any empty space, you will zoom back out to the regular arrange window view.

What to Use Folders For

One of the most immediate uses of folders is to clean up your workspace. If you're song is getting way too complicated and it's becoming hard to keep track of everything, pack a few folders and give your eyes (and brain) a break.

When your session starts to get big and unruly, it can become work just to keep track of where everything is! A great use of folders is to simplify your session by grouping similar instruments together.

Here is an example of a session that is starting to get busy:

Not including spacers and Aux tracks, there are 46 tracks!

But really the cue could be broken down into the following groups of instruments:

If I select the regions of each section, pack them into individual folders, and label them, I get this result: 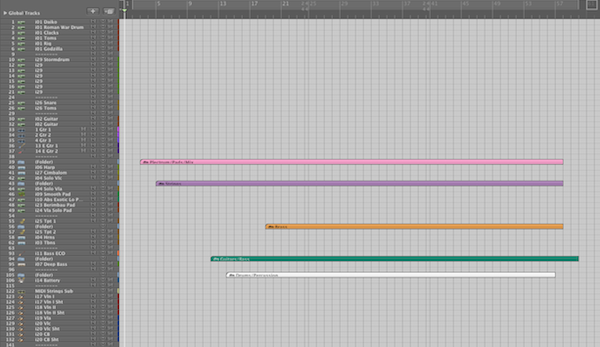 A bit ugly to look at but remarkably simplified!

Now I'll go go through and hide all the unused tracks since we just need to see the folders:

If I go inside the Drums folder all I need to see is this:

Make a Folder of a Single Track

Often I will have a drum part with a basic pattern that loops, and occasional changes for fills or variation. Something like this:

Before I was using folders, if I wanted to make that into a single movable region I would have to merge all the smaller regions together. This was annoying because then it became harder to go in and tweak the individual parts if I wanted to. But by packing the regions into a folder, I get both the benefits of moving the entire section around as a chunk, while also being free to go inside the folder and edit the regions how I want to.

A nice feature of making a folder on a single track is that it creates a region, but not an entirely new "Folder track".

You can loop a folder just like you would loop a region. So if you have a drum pattern made up of a couple of tracks like this:

Pack them into a folder and loop the folder instead!

The Folder as Region

One of the more interesting things about folders is that a folder region can be treated just like any other MIDI region. This means that you can do a lot of things to it.

For example, you can do global edits. Perhaps you have packed a folder with the A section of your song. Now just copy the folder, but this time transpose it up a half step, and bring the velocity down 20.

Something else you can do is move the folder region to a different instrument. Lets say you had a folder made up of piano regions:

Simply move the folder region to a different track, such as pizzicato strings, and you've just re-orchestrated the part!

One of the only caveats with this method is that even if your folder contains regions on many different instruments, when the folder region is placed on a single track it will only play the sounds from that track's instrument.

A practical use of folders is as an arranging tool, both for efficiency and for trying out new ideas.

You could pack an entire section of your song, such as a verse or chorus, into a folder. Then you could simply copy the regions to build your song's form, or try moving sections around to see if they flow together better in a different order.

If for some reason you get REALLY into folders, you can take it to another level! What if your folder itself starts to get out of hand and you need to simplify? No problem, just pack another folder! There is no limit to how many layers of folders you can have, so go crazy.

Because of the deep layers of folders available, you could theoretically even score an entire film out of a single Logic session. Just pack each individual cue into a folder, and when you zoom out to the highest level you can see your entire score on the timeline.

(This is not something I have actually tried myself, but I might experiment with it on my next short film. The only drawback I foresee is that any tempo changes you made in an earlier cue would have a domino effect and offset everything else after it... but it's an interesting idea in theory!)

If you are a film composer, chances are pretty good that you will be asked to make revisions on your cues. Sometimes you might change two things, and the director will decide "I like the first change, but lets go back to the original on the second one." Then it becomes a tedious task of figuring out how to get the old music out of the original session and merging it with the new. Using folders, we can simplify this process.

Before you start your revisions just pack everything into a folder, name it "Version 1", and mute it. Then duplicate the folder track by choosing Track -> New with Same Channel Strip/Instrument and copy/paste the folder region on to this track. Label it "Version 2" and then use that as your revision.

If then the director asks you to go back to some of the original material, you have it right there in the same session.

Using folders to organize and simplify your workflow takes some getting used to. At first it can feel like more trouble than it's worth while you are still used to doing things your old way. But with some experimentation and practice, folders can quickly become an excellent way to improve your efficiency in Logic.

What do you think? Never used folders before, or do you use them all the time? Share your favorite folder tips or questions in the comments!