Following my tutorials on creating a house drum track, making electronic basslines, and mixing pad sounds it now seems an appropriate stage to add some crash and effect samples to our sequence.

Although there were some basic crashes already in the sequence, these have now been replaced to show the construction process in detail. These sorts of effects are great for adding impact when introducing a sequence or new part and reverse effects or rises are the perfect tool for creating anticipation. You will find these techniques especially useful when switching between sections in your project or moving in and out of breakdowns.

Although these tutorials are completed in Logic Pro 8 and in a one particular style of house, the techniques are very much generic and can be applied to any software and genre of electronic music. Obviously this track isn’t going to be a chart hit but it should give you some useable guidelines as it unfolds.

A good place to start when creating this sort of sound is loading a very basic crash sample or recording. These sounds can be found in any library and are usually recorded dry and direct, giving them a crisp quality and a good amount of attack.

A sound like this may seem a little middle of the road but it will give you a good foundation on which to work, allowing you to add more sounds and still retain a good amount of impact. Of course this sound can be replaced or removed at a later stage in the programming.

If you are looking to create a wide stereo sound here or just want to create some contrast you can start with two different crash samples. It’s advisable to look for two very different sounds here, so that there is some definition between the two. For similar reasons it can be advisable to use two mono sounds, or at least one mono and one stereo. When layering a number of sounds in this way too much stereo information can lead to a noisy result.

Try using a long crash sound and a shorter mono splash cymbal sample. These can be panned apart to create a wider image. As these are the basis for the sound we are building they can be left pretty much dry. It’s a good idea at this point to ensure that the samples are clean and the start and end points contain no clicks or pops.

Once you are happy with the basic crash sounds you can start to layer effect samples over them to create a more synthetic sound. You’re really looking for depth and width here so stereo samples tend to perform best.

When it comes to the method for generating these sounds you have a few options. If you feel you are competent enough in the area of synthesis you can program an effects patch for your favorite soft synth. Utilizing features such as noise oscillators and self oscillating resonant filters, envelopes and LFOs, just the right sort of sounds can be produced. It might be worth checking the list of presets that come with your soft-synths as many come with ready made effect patches that might be usable for reference or a solid starting point.

If you prefer a faster route or you are still quite new to the area of synthesis then you might want to opt for a pre-constructed effect sample. Many sample libraries have dedicated sections for such effects and often the choice is overwhelming. The selection process is really fairly simple here, if you intend to use several effect samples it might be a good idea to select sounds that are monophonic in nature with less complex harmonics. As was the case with the crash sounds, this will allow for more sounds to be mixed without the result becoming too busy.

I have opted for samples in this case and for the initial sound I have chosen a noise based woosh, as I plan to use a second effect sample in the next stage.

When choosing more than one sound in this area, contrast is once again is key. Although my second effect sample does contain some noise, it is much more resonant in quality and compliments the first effect nicely. These samples can then be panned to create a wider image and a relative balance should be struck in their levels.

Now you have all your crash and effect samples working together nicely, it is advisable to group them. This not only gives you greater control over the sound levels, but also allows you to add any additional processing you may need here.

In this case I have used a high pass filter to remove problematic low frequencies, a side chain compressor (triggered by the kick drum) and some stereo delay that is acting only on the higher frequencies of the group. This processing adds some cohesion to the sounds and hopefully makes the result sit in the mix a little better. Of course you can add any processing you wish at this point. 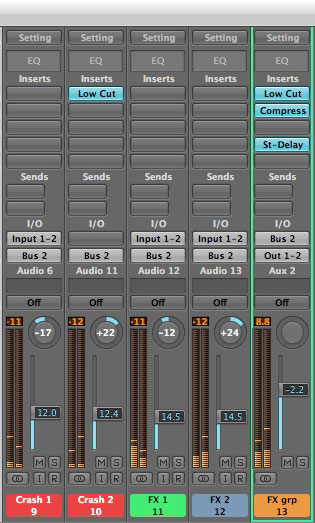 Another great way to generate effect sounds is to use a combination of the elements that are already in your mix and some delay or reverb. By adding large amounts of reverb or delay to certain sounds, long tails are created and these can be exported, cropped and used as sounds in their own right.

For an example I added a large reverb to the end of the track’s bass pattern. I then exported a 100% wet signal from the reverb plug-in and imported the result on to a fresh audio track. I then cropped the end of the reverb tail and placed it at the start of the sequence with the crash and effect samples. 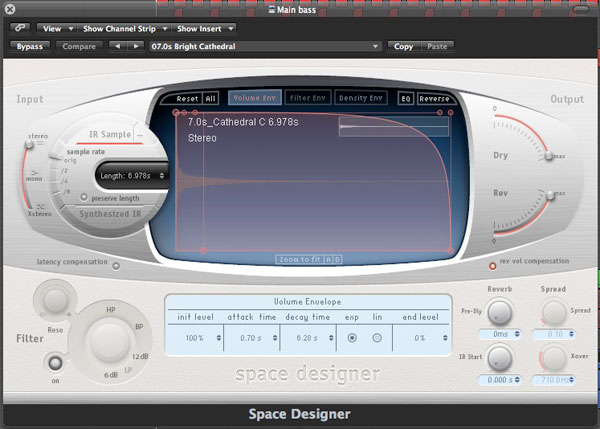 What you will find when using this method is that the parts created will not only add a lot of atmosphere but they will tend to be in tune with your project as they were essentially created from your original instrumentation.

A great way to build up to a new musical part or section of your arrangement is to use reverse effects and percussion. For a brief example of how these effects can add real anticipation to your project I have simply reversed the bass reverb tail effect and one of the crashes.

Of course you don’t have to limit yourself to re-using audio you have already used. Fresh sounds can be reversed and placed in your project.

Once happy with the placement of these new sounds, be sure to experiment with further processing such as side chaining, filtering and delays to polish the final result. 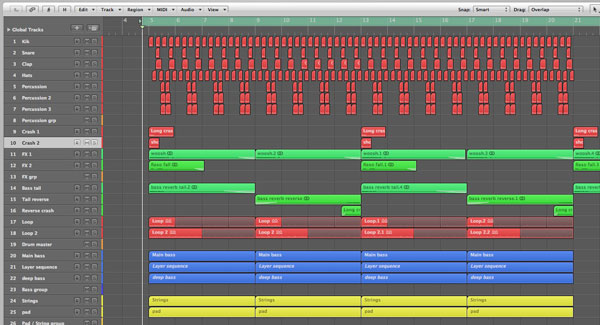