In this age of modern techniques some want to go back decades and want to achieve that old 30's vinyl and radio sound. Nowadays it's quite hard to achieve the sound of a real vinyl record but using some effects that every DAW has we can come real close to that sound. In this Quick Tip we're going to use Ableton Live, but almost every single DAW has the effects we need (Vinyl Distortion, Filters, Bitcrusher).

The first thing we do is drag Live's native Vinyl Distortion effect into our effects rack. From Live's list of presets for Vinyl Distortion pick "Vinyl", because well.. we want to get that vinyl sound.

The buttons we want to tweak are the Crackle knobs Volume and Density Volume decides how loud the little crackles of the record should be, I usually don't put them too loud unless I want to go back to pre-1900.

Density decides how often we can hear crackles. For example if you put it to 50.0 it's like there's a layer of dust on your record. If you put it around 10.0 it's more like you've got an old record which is the sound we are aiming for. 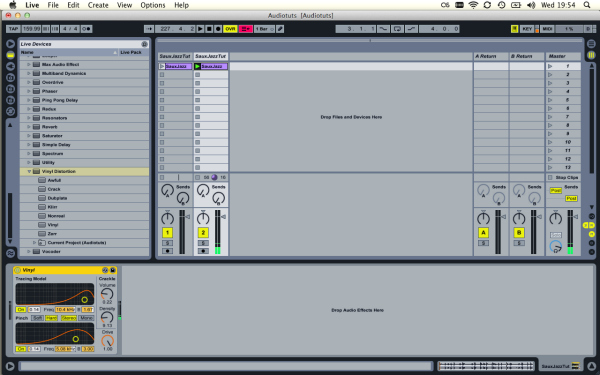 The next thing we add is an Auto Filter. You can drag it from the Live effects, right after your vinyl distortion plug-in.

What characterizes vinyl and old radios, especially those from around the Roaring Twenties are that there are almost no low frequencies to be heard. So we change the Auto Filter setting to hi-pass (the 2nd button underneath the frequency spectrum). We can change the frequency to between 500 and 700 for the result we're aiming for. Now every sound lower then the selected frequency will be silent.

Just like with Step 2 we add another Auto Filter, but now we do something else with it. Not only are the lows cut-off on a vinyl record from back in the days, but the high frequencies weren't as present as they are nowadays as well. We change the Auto Filter setting to lo-pass and put the frequency right about 9.00 kHz. Now we're done with the auto-filters and our sound is getting closer and closer to a old record or radio.

Now comes the most important part of the technique: the bitcrusher. There are a lot of VSTs and plug-ins around that have a bitcrusher effect. Live has one as well, it's named Redux. So we load up Redux at the end of our effects chain.

Redux does what it name suggests, it reduces the quality of the sound, but we want that. In this tutorial less quality equals more fun. First we'll have a look at the Downsample part of the effect. We switch the "Hard" button to "Soft". Then we turn the knob just a little. This effect gets too harsh when you put it too high and your sound won't sound like an old recording but more like a blender or something. I usually put it around 4.00. 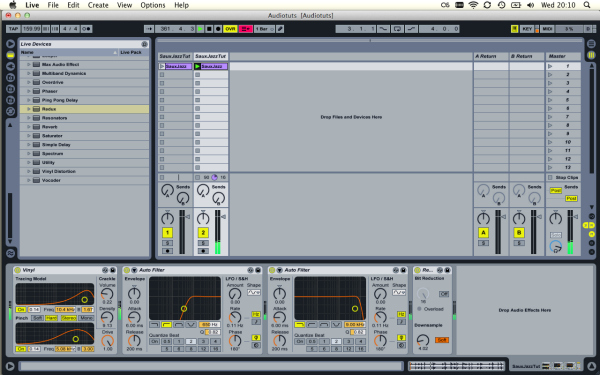 We go on with the Redux effect. Now we'll turn on the Bit Reduction and turn the knob down to around 10, just as much as you like it! 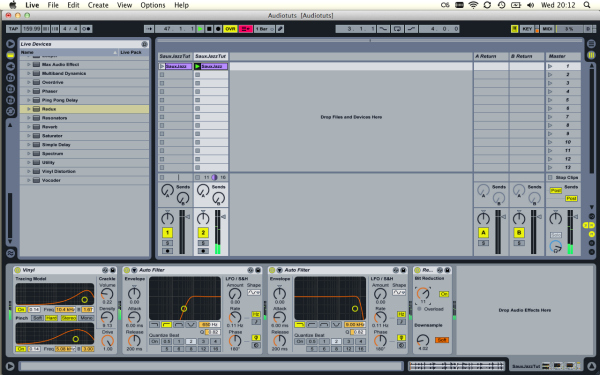 What I tend to do when I've completed my effect rack is group all my effects into one group, this can be done by pressing Command+G/Ctrl+G or right-clicking and selecting group tracks. This makes it possible to turn all effects on and off with one click. 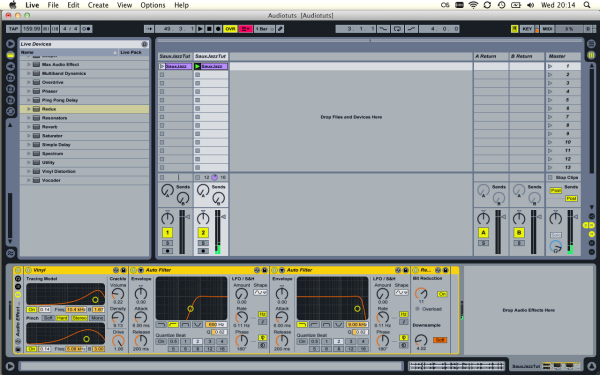 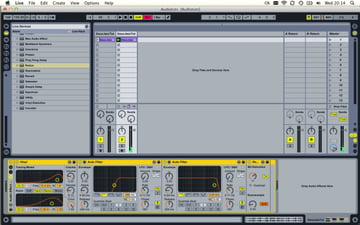 We made it! The effects are in line and we achieved a nice old 30's like vinyl/radio sound. We've turned our super modern computer with crazy processors and stuff into an old radio! My last advice is to just play around with all the knobs, because you get the best ideas while fiddling with knobs if you ask me.