One of the things I've become interested in lately is creating realistic sounds from samples. This basically means creating organic sounds as if they were recorded from a live performance or a naturally occurring sound phenomena from static and rather lifeless sounds or samples. This quick tip I am about to show you regarding kick drums can be extended to any drum sound or any other sound type for that matter. 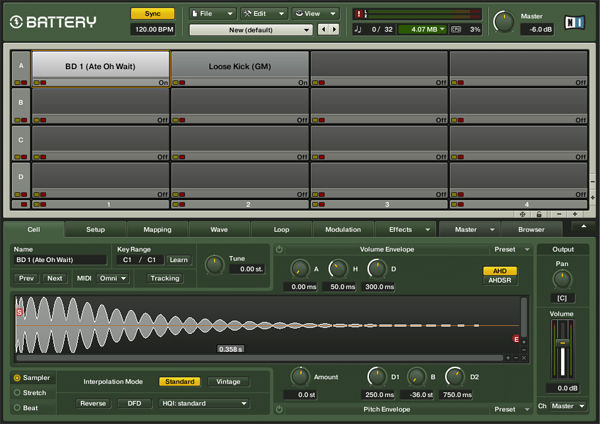 Battery showing the sine waves of the 808.

The first thing I have done is instantiate Battery (this can be done in any DAW and sampler) with a static kick drum sound from an 808. This is to lay the basis for my kick drum and generate the necessary low frequency sine waves inherent to clean and pronounced sounding kicks.

Next, I went through my library and found a velocity layered 'real' kick sample to lay on top of the 808.

I then recorded both kicks and sent them through a free app. called Transcribe! (you should check it out www.seventhstring.com) which helped me to tune both kicks to C (an arbitrary tuning, but that is what we will work with here - I had to pitch the velocity layered kick form A to C).

The left filter is for the 808, the right for the velocity layered cell.

I then went to the modulation menu in Battery and set a tune modulation by envelope to both drum sounds and set it to a fast attack and quick decay in order to modulate a octave + of pitch which accentuates the attack phase of both kicks.

The modulation envelope in the bottom left.

I then went in with Logic's transform tool to randomize my MIDI layers. I gave the tops a +- 10 random velocity from what I had selected previously as I wanted to take advantage of the different samples of the velocity layers and I gave my bottom end a +-5 as I wanted my lows to remain constant and not articulate too much. If your DAW does not have something like this, you can easily add some randomization by hand.

From there I took out some mid lows with an EQ to get rid of unnecessary sonics and tighten up the sound-basically get rid of the floppiness of it. I then added some point to the attack with the high shelving filter and cleaned up the bottom end and added some punch with a resonant low cut.

You can definitely use more than two sample layers for this trick, but you should also be careful not to overdo it and make your sound muddy. I have found 3 for the kick is about the maximum for me. Snares and other elements which consist of a lot of harmonics can be layered more depending on the sound you are going for, but you should still be careful not to overdo it as you will just have to get rid of the extra information later on.

Although this trick is really no replacement for a live performance, it can give the feeling of one and is a great substitute for expensive studio and recording time. Furthermore, as many mixers drop the bottom end of kick recordings for pure sine waves anyway, this kick layering trick sounds great and current for the time/effort involved while allowing for a large amount of control over dynamics and sound variations.