Do you feel like you are required to hit your MIDI controller too hard to get loud notes? Or maybe you have a different situation. In this Quick Tip, I'll show you how to customize how FL Studio handles velocity.

First, press the F10 key on your computer keyboard, and the Midi Settings window should appear. 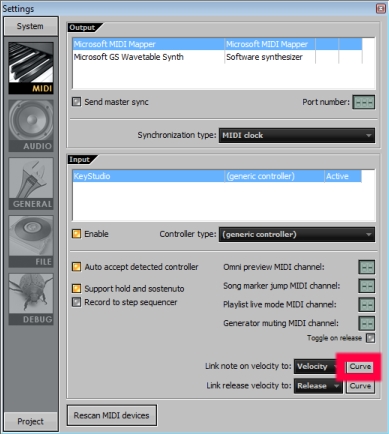 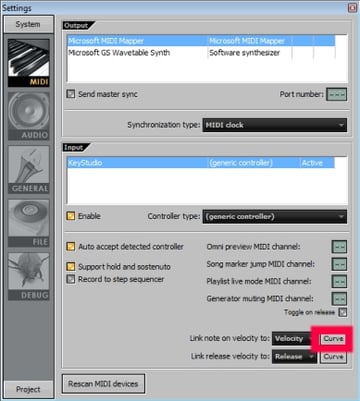 Next, click on the Velocity Curve button and the curve should appear:

This is a grid with an x and y axis. We can think about it this way, at any place along the curve, the X-value is what FL Studio thinks you're playing, and the Y-value is what we want FL Studio to say you're playing. Keep in mind that any adjustments made to this curve are pre-Piano roll and it will only change how FL Studio handles MIDI coming in.

So let's adjust the higher velocities to make them easier to reach. First, Press a key or pad on your MIDI Controller, and press it hard a few times. Don't get anywhere close to breaking it, just press it what you think your typical maximum hardness will be when performing. Each time you press a key or pad, a vertical white line will appear in the grid, showing you how hard FL Studio thinks you pressed it. 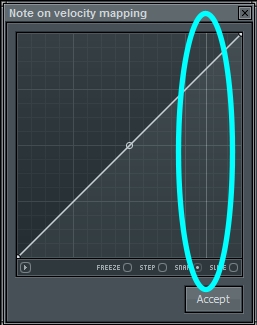 Add a point to the curve by right clicking and move it to the top of the grid, next to the vertical white line. As for me, I'm placing a point at X=87.5, Y=100. Remember that X=What FL Studio thinks you're playing, and Y=What you want FL Studio to say you're playing. By placing a point here, what I'm saying is "Look, for this MIDI controller, what you think is 87.5, that's 100." This means that what FL Studio used to consider as 87.5 percent velocity, will now be considered 100 percent velocity, which is good because now there is less risk of breaking my midi controller when I want to reach 100 percent velocity. Depending on what MIDI controller you're using and your playing style, this percentage will be different for you.

Maybe you have the opposite problem, that you try to play medium velocities but FL Studio thinks you're playing hard. If that's the case, check out the next example: 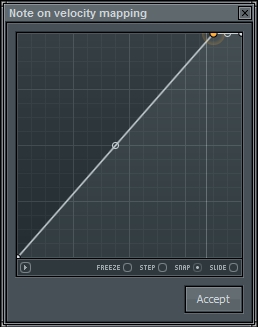 If your situation is opposite of mine--that is--when you play your keyboard at medium strength, FL Studio interprets it as hard, then you will adjust your curve differently. For example, if you're playing what you think should be 75 percent velocity, but FL Studio takes those messages and makes a white line at 90 percent, what you would do is place a point at X=90%, Y=75%. This basically tells FL Studio, "Hey, what you think is 90 percent, from now on you're going to treat it as 75 percent".

When to Save Multiple Profiles

You might find that different MIDI surfaces, such as drumpads or keys, require different MIDI velocity curves. Also, if you have a VSTi that handles velocity much differently than your other VSTis, you might want to change the curve when you're using that plugin. This is where saving multiple velocity profiles comes in handy. To do so, use the arrow in the lower left of the grid window. 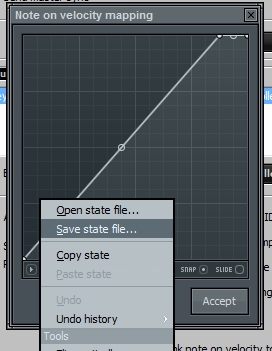 Now let's look at a couple other ways to set up your velocity curve: 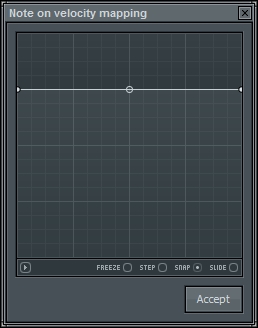 Like a cheap old electronic keyboard, how hard you press a key has no effect on the sound. This might be useful for some drum tracks, like if you want to record a snare track via midi and want all your snares to be the same volume. Alternatively, you can use the "typing keyboard to piano keyboard' function, which allows you to use your typing keyboard to input MIDI. You can do this to get a flat response because the computer keyboard does not react to velocity changes. 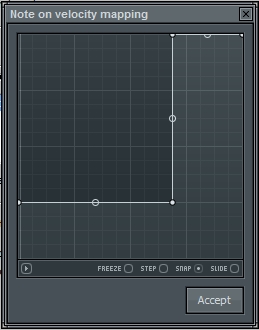 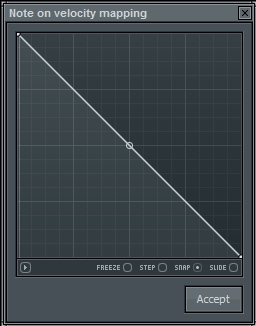 A light touch on the keyboard produces the loudest velocity, and vice-versa. I'm not sure why you'd want this but it's here for demonstration purposes. It might be fun.

Here's what mine looks like. It's much like what I demonstrated earlier in the tutorial, but I shifted the entire curve up because I wanted to bump up the Y at any given X, and I don't really need the lowest velocities.