Getting the most out of drum samples is very important, because it can give “life” to your mixes, especially when we talk about epic cinematic music where percussion instruments are very important. In this second part of the tutorial we will be talking about stereo doubling. Using stereo enhancer effects and playing around with stereo is a great way to add variation to your music. For those of you, who bought some of East West Quantum Leap's products and haven't tried the stereo double yet, I'd strongly recommend using it – it will definitely add colour to your music.


What Is the Stereo Spread Technique?

In the 50s there was a technique called “double tracking”, where the sound engineers want to give more depth to a singer's voice and therefore record the same take again and pan it differently. Then they had two separate mono audio files with the same melody and lyrics, but slight differences in rhythm.

This technique though was very time-consuming (making so many takes to get things perfect) that in the 60s a special analogue-recording technique was developed – automatic double tracking (ADT). This technique simply created a delayed copy of the recorded track.

In my humble opinion it's best to use the “manual” double tracking technique, because the automated one can lead to phasing issues. (So be very careful and precise when using it). Yet, as I've already told you, it is very time-consuming.

This technique is widely used in pop, rock and in all kinds of music. If you're further interested, Joey Falconer wrote an amazing article about stereo doubling in distortion guitar sounds: How to Create Rich Depth with Doubling Techniques.

And What Is the Connection Between This and Stormdrum?

There is a stereo double / stereo spread / stereo enhance button in East-West products' new PLAY interface. It actually is an automatic double tracker tool and does exactly what I spoke about earlier.

Look at the picture above – this is how this tool looks like in the PLAY's Stormdrum interface. You have a knob that goes from 0% to 100% and two buttons – LEFT and RIGHT.

These buttons define which channel should be delayed, and which will stay as it was recorded. For example if we click on the left button and apply the knob to 50%, then the left channel would be untouched, the right will be slightly off and we'll get the feeling the the left channel has its volume increased. Listen to this sampled guitar (by Quantum Leap Goliath) with effects applied and observe how the stereo wave changes.

This is the original stereo wave of the guitar sound. 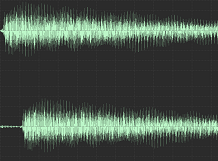 This is the stereo wave applied after clicking the “LEFT” button 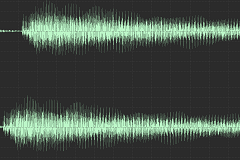 This is the stereo wave applied after clicking the “RIGHT” button

Now listen to the demo – it changes from MONO to LEFT, then MONO to RIGHT. (By “left” and “right” I mean the buttons of the stereo spread tool.)

I Still Can't See the Connection Between This and the Epic Drums!

Yes, we were talking about guitars and channels, but if you got that right, you could add this effect right to your percussive tracks. Have in mind that large hits with lots of low-end frequencies must be in the centre of our stereo field (mainly because we are accustomed to listening to low-frequency instruments—bass drum, bass, etc.—there and changing this would result in lack of stability in our mix).

Finally here are two demos that I made specially for you. In the first one you can hear some very epic drums. I used layered bass drums that are in the centre and with them I have some darbukas and log drums that are stereo spread L and R accordingly (you can hear them in the beginning). After that I introduce some shakers and cymbals.

The second demo is an excerpt from the whole track – with strings, effects, vocals.

I sure hope that this lesson was useful for you. Stay tuned for the final part of the series!