I was inspired by an episode of South Park the other day. It was the Facebook episode and it had a pretty funny view on the effect Facebook has had on our culture. Audiowise, I noticed the underlying weird voices of the Facebook guardians. They had this sort of metallic voice quality, which got me thinking of all the interesting sound experiments sound engineers working in animation create every day.

When watching cartoons you don't really notice the vocal effects and treatments some of the characters have. It's understandable to not take a special interest in cartoon voice techniques when you are five years old watching them, but if you are a sound engineer I think you could learn a lot from cartoon post production engineers.

I decided to experiment a little bit and see what I could come up with. I found some voice samples at this site and decided to see what kind of cartoony effect I could create inside the DAW. I used Logic Pro's pitch shifter, flanger and vocoder, but that doesn't mean you can't come up with similar results using similar plug-ins. Take note that I am not a professional animation sound engineer, but I liked the results I got so I decided to share them with you.

We are giving this vocal the cartoon treatment.

Already pretty cartoony, but let's see what we can achieve with some effects.

In that Southpark episode I noticed that the robots has a slightly pitch shifted voice so I started with Logic's Pitch Shifter plug-in, detuning the voice. I'm inserting all of these effects instead of sending them, so The mix slider becomes pretty important when you are mixing it all together.

I detuned the voice 6 semitones and 15 cents. I mixed the detuned effect underneath the normal voice with the mix slider.

This is what we have so far. Funny detuned doubling!

The next step was to insert a vocoder on the track, severely effecting the voice. I started off using a preset called Deep Shift in the Evoc's preset bank. It sounded close to what I wanted to achieve and with some added tweaking and fiddling I got a nice weird vocoded effect. 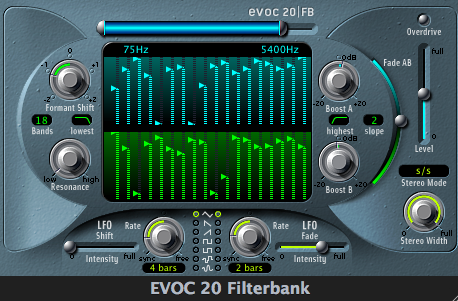 Notice the mix slider is only at 50%, since we don't want to overload the clean signal with the vocoder. Now the pitch shifted voice has a slight sweep effect generated by the vocoder.

I wanted to add a slight metallic garble to the voice, so I decided an extreme flanger would be able to recreate that. With a lot of feedback and the effect generated by the intensity and speed parameters we achieve that robotic garble underneath. This effect is only mixed at 20% since it is such an extreme effect. I didn't want it to overshadow all the other ones, but rather to enhance an already crazy vocal effect. 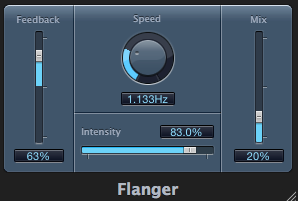 And this is what we end up with.

There you have it. This type of voice could be used to great effect in some cartoon or video game. Creating effects like this, that are unnatural and a bit out of this world is very interesting and entertaining. Not only do you learn of how some of the various type of audio effects work but you create something funny and creative out of it.

I'd love to know if any of you readers work in fields like animation or in video games where you need to create similar effect. Let us know in the comments.

Audio ProductionLogic Pro
Did you find this post useful?
Yes No
Would you like to provide feedback (optional)?
Cancel Submit

Update me weekly
Looking for something to help kick start your next project?
Envato Market has a range of items for sale to help get you started.