Here is a quick and effective way of creating original and complex drum patterns spontaneously. I am using Logic, but the concept is not DAW specific.

First, I am going to start with a standard dance/rock ostinato with a 4 to the floor kick, snare on beats 2 and 4 and a hi-hat running constantly on the 'ands' of the bar.

Now, I want to add a rim to the pattern and do not want to over think the placement, but am also not sure where it will fit best within the context of the song. To do this, I will program a simple rim pattern that hits once every 6 16th notes. This way, the total drum pattern only repeats after 3 bars rather than every 1, creating a more complex rhythm.

The ostinato with a three bar rim phrase.

I can now preview the 3 bars using a single bar loop and edit out the portions I do not want in order to create a new ostinato. Here, I've decided to keep the middle portion of the rim and loop it. 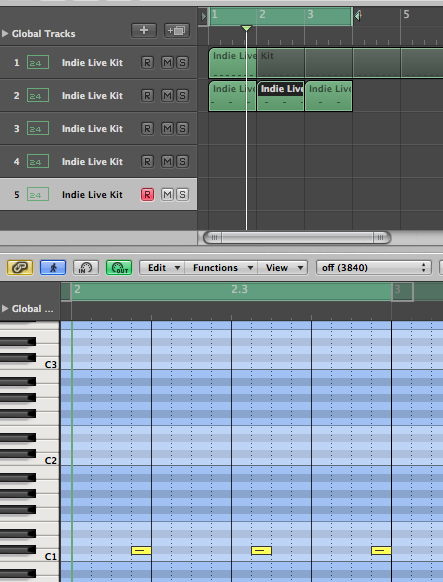 The ostinato with the rim phrase cut and looped.

Now we can get a bit more complex with the toms, but still use the same underlying principle. Here, I have a 5 hit tom pattern that I will use as a base unit and have it repeat as a 2.5 beat loop which, when played against the ostinato, only repeats once every 5 bars.

The ostinato with the five bar tom phrase.

Once again, I will preview this and cut out the portions I do not want to create a single, tight, loop. I've taken the loop at bar 4, trimmed it and re-looped it to create a new 1 bar loop.

The ostinato with the tom phrase cut and looped.

Obviously, you can get much more complex with your patterning and keep as much or as little as you want. (I could have cut all the material into individual loops and used it for different sections of the song, for example.) This method alone has gotten me an interesting loop to work with in the matter of a few simple and organic steps.

Another simple method is to use a drumming concept known as displacement. With displacement you basically move part or all of a drum phrase forward or back by a certain number of divisions. Here, we will move the rim and toms back a 16th note to create a completely different pattern when played against the ostinato.

The ostinato with the rim and toms displaced backwards by a 16th note.

It is important to note that none of this is random. Music (and art in general) is based on very simple logical progressions working in tandem to create a complex tapestry to the observer. When working on the concepts explained here (and throughout any type of artistic endeavor), try to stay away from placing things 'because you want to'. Rather, place them because they make sense within their own logical context. This way you will be able to make better music more quickly.

An eight bar phrase with the two loops alternating every two bars.