Quick Tip: How to Export and Resample a VST Instrument in Ableton Live

In this tutorial we're going to look at a simple way of extracting VST sounds and resampling them into Ableton Live's Sampler and Drum Rack. This can be helpful in situations where we want our software setup as clean and minimal as possible, with low CPU intensity, especially in live gigs (live keyboards via Laptop), Dj-ing, etc.

It's most suitable for non-sustained sounds, such as chromatic percussion, drum sounds, staccato and pizzicato orchestra sounds, and more. I don't really recommend it for sustained sounds, since it seems to get a little too complicated to be worth the trouble. In this example I use Edirol Orchestral, which contains a very nice Celesta sound. I don't really need the whole VST for my live setup though, and I'd prefer to use only built-in synths and effects in general, to avoid crashes, CPU intensity, and psychological tension.

So, let's begin by loading up our VST instrument into a new MIDI Channel. Next we'll create a MIDI clip with continuous notes in the full 128-note range, from C-2 to C8. Most of the time some of those notes won't even contain any sound, but it's great to stay organized and use the same MIDI clip for every VST sound for obvious practical reasons. Switch the quantize ("Fixed Grid") to "1 Bar" and lower the tempo quite a lot. For this example I set the tempo to 50bpm (just to be sure that every sample gets played as a whole individually). To make it easier and faster, write the first 11 notes from C-2 to B-2, then select all (Ctrl-A), and duplicate (Ctrl-D), then press Shift and Up-Arrow (which brings the whole group of selected notes an octave higher on Live 8). Our first MIDI clip will be at 110 velocity.

Do that until you've reached C8. Bring the quantize ("Fixed Grid") value back to 1/2 (1/8 would be even better) and lower the length of the notes a bit, because some VST sounds contain key-release-triggered samples which would get stuck within every next note's beginning.

Next we'll "Freeze" that MIDI channel (right click on the Channel's name, then select "Freeze"), automatically turning the MIDI clip into an audio clip (don't worry, you can "Unfreeze" the track if you like). Hold Ctrl and drag and drop the clip into a new Audio Channel. Notice that it is two times the original MIDI clip in length, and we only need the second half (or the first, it doesn't really matter). So, set "Start" to "129 - 1 - 1", then right click on the audio waveform and select "Crop Sample".

Now we can right-click on the audio clip and select "Slice to New MIDI Track". We're going to select "Create one slice per: Bar" and the "Slice to single Sampler" as a slicing preset.

A new Sampler instrument is automatically created, with the 128 notes distributed equally. Go to Sampler's "Filter/Global" section and set the Release value to 3 seconds and the Attack to 10ms. You can also disable the "Retrigger" function if you want (When enabled, notes which are already playing will be retriggered, rather than generating an additional voice). 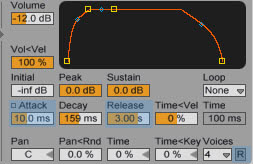 Now we can delete the "empty" notes if we want. They will only keep up more hard drive space and we don't want that. Also, let's add a compressor and a limiter, to even out levels and peaks.Do the same for different velocities (if the original VST instrument has mutiple samples for every note). Then we can group those Samplers into one Instrument Rack, sorting them out via Velocity.

Next time you will need no more than one minute to do this technique, since you will already have the MIDI clip ready. You can also keep things tidy by saving your Instrument Rack in a separate folder. Just target Live's File Browser within your custom Preset Folder and drag and drop your instrument rack. The reason I personally don't save it as a preset in the Library is that it's easier to transfer my presets from one computer to the other that way. Whatever suits your needs though! 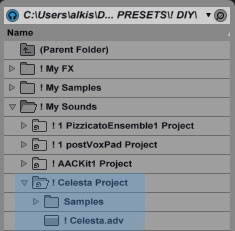 This technique works quite well for me, I hope you find it useful and helpful. You should probably only use it when there's no risk of reducing the instrument's quality a lot though. I've included an Ableton Play Pack with the MIDI file inside. You can try the same method using a Drum Rack (select "Built-in" as the Slicing Preset), it's quite more suitable for beat and drum kits. Thanks for reading, and happy music making!