Quick Tip: How to Record Loops from Reason

Sometimes you just don't want to work with MIDI. I must admit, I'm not the biggest fan of midi notes. Having too many synths open at one time eats up your CPU power and looking at long bars of MIDI notes is just much less flattering than the audio waveform. Maybe I'm the only one who likes the form of a waveform but anyway, sometimes it's just better to render your MIDI to audio.

In the following quick tip I'm going to go through a very basic process of recording a loop into a Logic Pro audio track from Reason's Dr. Rex loop player. This doesn't only come in handy with recording loops, but is actually more convenient when you want to play through any of the synths available in Reason but record them into Logic.

To make sure you are using Reason as a slave to Logic you must first open up Logic Pro and then open up Reason. After you open up both programs go ahead and create a new session for both programs. When you create a new session in Reason it usually creates a session with the 14:2 mixer already set up. Insert the Dr. Rex loop player and select a loop from your loop library. Don't worry too much about the routing to the mixer. Just make sure that the loop is coming out of the master bus of the mixer.

Hit the preview button and make sure that your loop is playing by watching the meters. You shouldn't be hearing anything yet.

Now we are going to create an aux track in Logic. We need to set the input of the aux track to the master bus of Reason. In the mixer window of Logic Pro create a new aux track by selecting Options>Create New Auxiliary Channel Strip. Now we have an aux track to feed our loop into.

Select the input of the aux track and find the Reason folder in the input window that pops up. Since the loop is coming out of the mixer's L/R main bus we can just select the RW:Mix L/R for now. If you were routing a keyboard synth of some sort to a different channel in Reason that you wanted to record you would have to select the appropriate channel. But for now, L/R works nicely.

Notice in the picture that the channel fader is turned all the way down. This is a common stupid mistake that everybody makes when they wonder why there is no sound. For some reason we always forget to check our volume knobs.

Be sure to turn it up before you take the next step.

Step 3: Send Your Loop to an Audio Track

Now, if we have the loop running in reason and everything patched correctly with the fader up we should be hearing the loop come through into Logic. Because this is an aux track we can't just hit record and be done with it. We need an audio track to record audio. Therefore, we use the sends on the aux track and send the loop to a bus. Select Bus 1 and turn the send to unity gain. The easiest way is to click the send button while holding down the ALT key. That way it instantly pops up to unity gain. 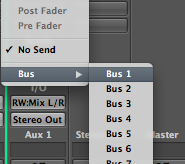 Now we need an audio track that can receive this audio. Create a new audio track and select its input to Bus 1.

Now we should have an aux track that's being fed by Reason. From the aux track we send the loop to an audio track via a send. By selecting the same bus as the send in the audio track we can receive the audio from the aux, hit record and end up with our loop in audio form.

Recording loops like this might sound fairly basic but it can come in handy for a lot of things. It's also very convenient to record any synths, pianos or other sounds from Reason into Logic so you can concentrate on processing everything using only one computer program, focusing your efforts and saving your processing power at the same time.