Quick Tip: How to Recreate Tails of Drum Samples

Chopping drum hits out of loops is a great way to gather one-shot drum samples, but since they're in a loop, the tail or decay of the drum is often interrupted by another hit. To make our abbreviated samples sound more natural, we'll try to recreate the lost tail of the drum in Edison, but any audio editor will do.

Load a loop into Edison and delete everything except the drum you intend to extract. In Edison, Ctrl+Del will 'trim' the audio, deleting everything except the current selection. Aim for a nice, clean hit without any strange background noises. A decent decay before the next hit will help immensely. Try to trim the sample so that it starts exactly at the beginning of the drum's transient and ends before any other sound pops up. Make sure the sample begins and ends on zero-crossing points.

When it's looking good, select all with Ctrl+A and copy and paste the audio with Ctrl+C and Ctrl+V. Now you'll have two copies of the drum hit. Right-click anywhere on the waveform and choose 'Select after current selection' from the 'Select' menu, or just use the mouse to select the second copy of the drum.

Press Alt+Left Arrow to reverse the selection. You probably see where this is heading already. If you chose a nice part of a loop to extract from, the drum sound probably has a bit of a tail, just not a very long one. By duplicating the whole hit, we can extend the small tail we already have and fade the sound out before the reversed initial transient is audible. Look carefully at where the two halves meet, if the wave suddenly starts going the wrong way, reverse the polarity of the second half with the option under the 'Tools' menu.

The easiest way to fade out our new fake tail is Edison's 'Fade out' button. If you can't see it, make the Edison window wider until it pops into view. You'll probably need to fade the audio out twice or so, once with the reversed transient selected and another time with more of the fake tail selected, to even it all out. You'll have to experiment a bit to get it just right. 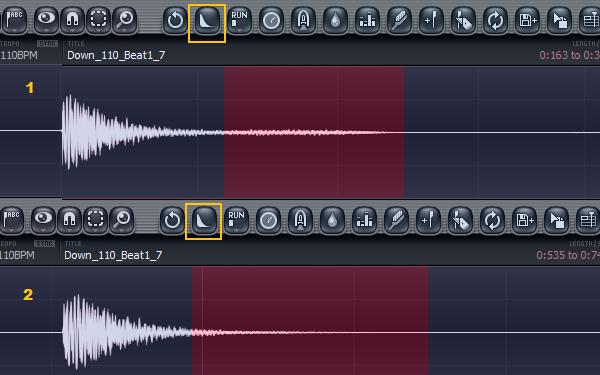 If you don't like messing around with fade buttons, you can also just draw in an amp envelope yourself. In the bottom left of Edison, click the little triangle and start making curves. You'll want the 'fake tail' portion of the sound to fade out naturally, but the reversed transient to be completely silent. Press Ctrl+E when you're happy with it to apply the envelope.

You might find the higher frequencies of your drum sound 'wooshing' back even after you've faded it out. To fix this, we'll use Edison's handy 'Undo mix (envelope)' feature. This lets you control the mix level between the audio as it is presently and how it was at an earler time in the undo history. We'll equalize the whole sound to get rid of the unwanted high frequencies and then undo the equalization by a varying amount over time with an envelope. Basically, the envelope controls the wet/dry level of the equalizer so that we can leave the beginning of the sound alone but gradually reduce the level of the offending frequencies.

To start, press Ctrl+Q to bring up Edison's equalizer. Gently roll off a lot of the highs, probably a little more than you might think is necessary. You might also want to reduce the level of some lower frequencies, especially with a bass drum that has a long, ringing decay. If it seems good, press accept.

Click the two squares connected with a diagonal line at the bottom left of Edison to bring up the all-purpose envelope. Draw in a curve that leaves the nice parts alone while cutting out the wooshing sound. You won't be able to preview the effect it has, so make a good guess. Don't spend too long tweaking the envelope, each edit will add a new event to the undo history and we don't want to lose our equalization undo point.

Click the scissors to bring up the tools menu and go into the 'Undo mix (envelope)' section. Click the undo point that is directly above the equalizer undo, because we want to revert to before the EQ. If it doesn't sound right, hit Ctrl+Z, tweak the envelope a bit and try again. 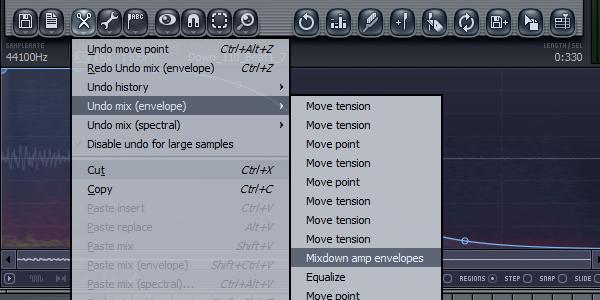 Here's an example of two beats, one with all the sounds chopped straight off a loop and the second with some of the tails recreated. It might not be the biggest difference in the world, but when believeability is crucial, it might make you feel better. 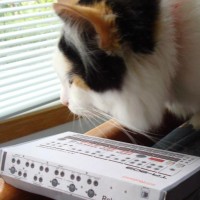