Quick Tip: How to Use Logic's Sculpture Synth

Logic Pro's Sculpture is a completely unique modelling synth, and if used correctly can create dynamic and extremely professional sounds. Most people are deterred by Sculpture as it looks a bit scary. This tutorial breaks each section down and explains how it is used.

At first glance sculpture looks extremely daunting, but if you break it down into blocks its as easy as any other synthesiser out there.

The fundamental sound producer in Sculpture is the string. This vibrates in different ways to produce notes.

The oscillator equivalent in Sculpture are the Objects. The objects react with the string in different (predetermined) ways to create variation and timbre. The resulting tone is then sent through a complex filter.

After that there are several effects including Delay and a very unique Body EQ. 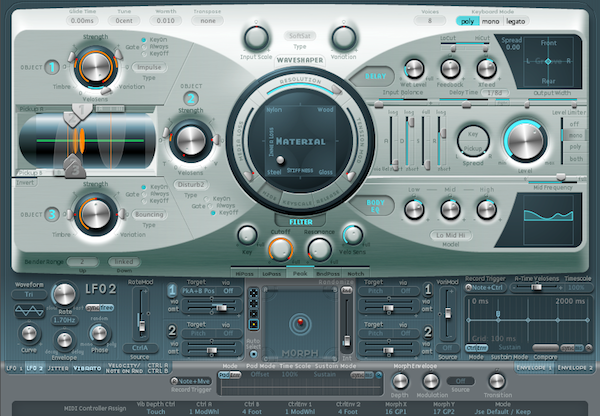 The Objects and the String

Sculpture has three Objects, these react with the string and produce sounds. Each object has a different set of ways that it will affect the string.

The main ones are: Impulse, Strike, Bow, Pluck and Blow. These are fairly self explanatory. Each object also has a strength control, in here you can change the Timbre, Variation and the Velocity.

After setting up each of your objects you can move them around on your string. This will change the timing that the object affects the string in relation to each other.

After the initial tones are created they are sent through a filter. This is very complex on the inside but very easy to use for the producer.

Essentially it changes the string material, you can move between four: Nylon, Wood, Steel and Glass. This allows for a lot of choice. You then have tension modulation and Resolution.

Above is a Waveshaper - this controls the saturation. And below is your standard Filter with a HiPass, LoPass, Peak, BandPass and Notch filter setting. 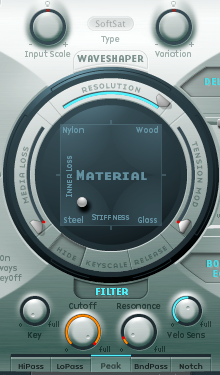 After Effects and Envelopes

The panel furthest to the right contains the master level, the envelope and a Delay and Body Equalizer. These are fairly standard and easy to figure out.

The EQ is very cool though, as it has a number of presets that replicate sounds of instruments, for example the acoustic guitar setting acts as though the string is being played on an acoustic guitar. You can also choose between Mono or Polyphonic.

Underneath the main modelling panel (left to right) you have the LFO's, Jitter and Vibrato effects, Velocity control, a really useful and easy to use Controller. In the middle is a Morpher this allows you to modulate between effects and can give some extremely interesting sounds. On the right are the envelopes you can map these to virtually anything on the modelling board to control the shape of the sound.

Now practice away tweak and modulate, and create some cool sounds. It really isn't as scary as it looks once you break it down. I hope this has helped please feel free to leave comments or any extra thoughts on Sculpture.

Greg Frey
Greg Frey has spent a few years dabbling in the arts of electronic music. As he was new to this not so long ago, he remembers the problems he faced and wished there was a tutorial for. He hopes he can help.
Weekly email summary