While Mid/Side (M/S) processing is not often used by mastering engineers, it has its advantages over normal stereo processing. One of them is that you can create some unusual effects because the sound is processed differently. This Reason tutorial explains how to process your sounds using channels for both Mid and Side, instead of Left and Right.

The theory behind the M/S processing is already explained here on Audiotuts+ by Mo Volans here: How to Use M/S Processing in Mastering. It's recommended you read it, since it'll help you understand this topic.

Let's start from scratch by opening up an empty Reason project. Create a Combinator and rename it to 'Mid/Side'. Note that the Combinator output signal is routed to the Hardware Device.

Now we're going to create the device to split the signal into Mid and Side. To do this, create a Thor Polysonic Synthesizer in the 'Mid/Side' Combinator and initialize its patch if not done already. Name this device 'Splitter'.

Turn off the Analog oscillator and the Low Pass Ladder filter, so the Thor patch is completely empty and not doing anything at all. 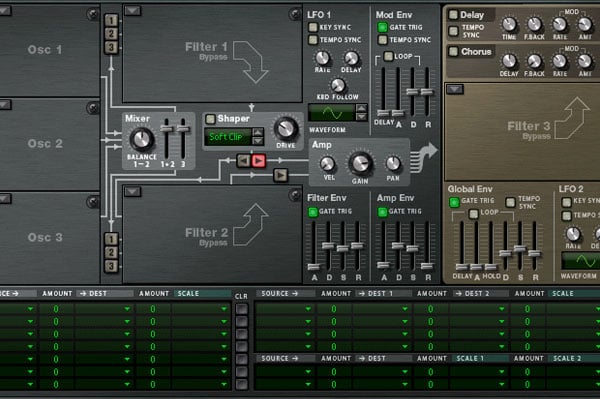 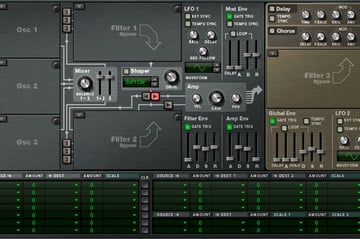 Flip the rack and connect the 'To Devices Output' L and R to Thor's 'Audio In' 1 and 2 respectively. Also, disconnect the Audio Output of the Thor. 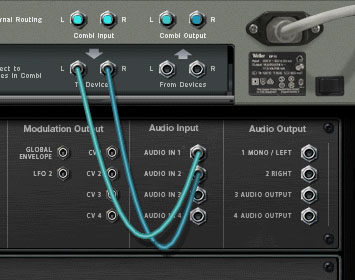 We're going to use the Modulation Matrix of the Thor to split the Left and Right signals. Remember what was said earlier in this tutorial: Mid is the sum of Left and Right, while Side is the difference between Left and Right.

Using the right hand side of the Modulation Matrix, select Audio In 1 as the Source. Turn the amount all the way up to 100 and set the first destination to Audio Out 1. Now, the Left (mono) output signal of the Thor contains the Left input signal of the song.

To create the Mid signal, we have to add the Right signal to this output. So set another Source in the Modulation Matrix: Audio In 2. Again, set its amount to 100 and choose Audio Out 1 as destination.

In the 'Mid/Side' Combinator, create a Line Mixer 6:2 while holding Shift (so it doesn't get routed) and name it 'Mid'. Now connect the Left (mono) output of the Thor to the Left input of the Mid mixer.

Try to understand what we've just done. The Audio In 1 and 2 represent the input left and right channels, respectively. Using the Modulation Matrix, we've added these to signals and sent it to one output signal: Mid. Thereafter, this output signal is mono-routed to a mixer.

Hold Shift and create a Line Mixer 14:2. Connect the Mid and Side Line Mixers to this new mixer. Then, connect the output of this mixer to the 'From Devices Input' of the Combinator. The splitting device is now completed and it's time to process your song!

For this tutorial a simple loop will be representing the song, just to give you an idea of the possibilities. Create a Dr. REX Loop Player and loop up a loop. (This tutorial uses the 'Clones' loop from the Reason Factory Soundbank.) Add a RV700 Advanced Reverb to it and make sure the output of your song is connected to Combi Input of the 'Mid/Side' Combinator. 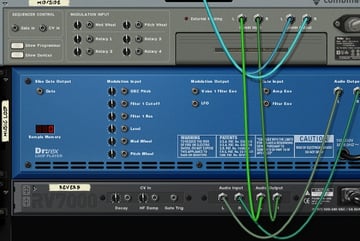 Now, play the song and solo the Mid channel on the Mixer of the 'Mid/Side' Combinator to hear the Mid signal only:

Similar, solo the Side signal to hear the Side of the song (which only contains the wet reverb of the RV7000 in this case):

Now that the signals have been split, the processing can begin. The advantage of M/S processing is, for example, that you can compress the centered kicks in a song while leaving the panned percussion alone. Also, you can add a lot of reverb to the sides without affecting the centered kick and bass of the song. To do this, add the effect devices between the signals Line Mixer and the 14:2 mixer in the 'Mid/Side' Combinator. Or create auxiliary effects on the Line Mixer. 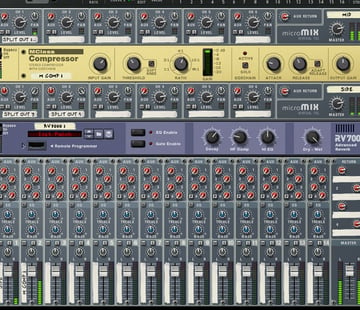 What more can we do? Well, as for most things involving music, the only limit is your own imagination. It's recommended to EQ the Mid and Side signals differently. Heavy bass in reverbs suck up a lot of energy of a song, so let's get rid of the low frequencies in the Side signal. Also, there might be some parts in the song you want to give a little boost. In this case, use an EQ boost on the Mid channel. 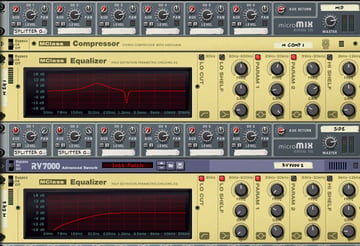 The Dr.Rex loop in this tutorial was representing a whole song. I chose to do this so that it would be easier to follow what is done in this tutorial. Of course, this technique will become useful if you apply it to one of your existing Reason projects.

Next to processing a complete song, it's also possible to process part of a song. For example, the described technique is great to process stereo backing vocals and a centered lead vocal. Also, the effects applied to the signals are very basic. Try to experiment with all possible effects on both the mid and the side channels.

For those who've read my previous tutorial about how to add stereo dynamics to you mix, try to use the tricks you learned there for the M/S processing. Let's give an example on how your 'song' may sound when you apply those tricks:

In the Play Pack coming with of this tutorial, the stereo dynamic tricks have been applied. It's recommended to take a look at it to give you some ideas of the possibilities on M/S processing.