Quick Tip: One Way Of Using The Noise Gate Creatively

Among the most underrated of mixing tools is the noise gate. It can do wonders for cleaning up loose sounds and emphasizing various aspects of a sound's dynamics. A lesser known fact is that it can be used as a unique creative processing tool. In this tip we will look at one way of doing this by combining Logic's noise gate with some creative routing techniques in order to create a dynamic auto panner.

If you are unfamiliar with noise gates, the controls are fairly simple and I would suggest looking in your product manual for a more in depth explanation as this tip is going to assume some degree of basic knowledge.

For this example, I have instantiated Ultrabeat and sent a clap to direct out as well as a reverb aux. I have then compressed the reverb (more on why I did this later) and sent the reverb to two aux. channels where I have placed noise gates. I have then sent the two gated verbs and the dry clap to a single aux. (just for added control) and sent that to my stereo out.

I am now going to solo one of the gates and bring up the threshold until my reverb begins to chatter (the gate opens and closes very fast as the signal is centered around the threshold) which is made more prominent due to the compression evening out the signal earlier in the chain. 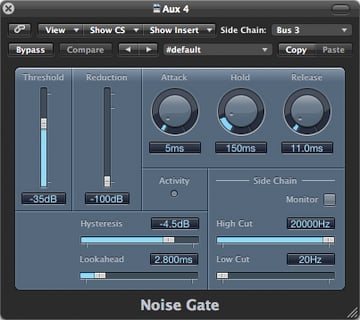 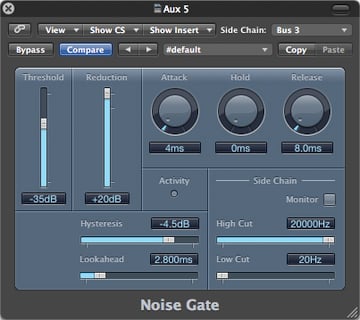 From here I can pan the two signals to opposite ends of the stereo spectrum or do any other number of things to each channel individually to create an auto panning effect (and then some) that responds to the signal dynamics. The possibilities are literally endless