In this quick tip, we are going to look at a few ways of playing with the timing of drum patterns to give the illusion that a standard drum ostinato is speeding up or slowing down in time.

The first and easiest way of creating this illusion is to slightly rush or delay a certain drum element. Here, I have set up a basic ostinoto with a standard four to the floor rock/dance pattern. 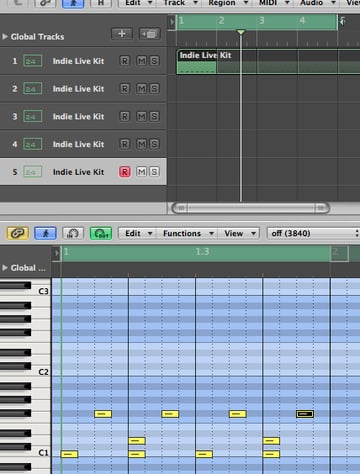 Now, if I nudge the second snare hit forward by a 192 division, it gives the portion of the bar between the first and second snare hits a subtly faster and more energetic feel. It may be difficult to hear, especially against a full band, yet it is an effective trick that many drummers use when they want to intensify certain areas of a song. This also helps to give a more humanistic feel to your programming, while giving the snare a more swung and accented feel.

Here, I have added a bass to help emphasize the snare's timing against the rest of the loop.

One drastic trick that many jazz drummers use is to displace the constant hi-hat pattern to the 2 of the beat rather than the 3 for certain sections. This gives the hi-hat a feeling of working against the music and serves as a good way to break up sections of a song. You'll notice in the example below that the hi-hat sounds polyrhythmic and as if it were moving backwards in time against the song even though all that is happening is a 16th note displacement.

The pattern with one bar of the displaced hi-hat.

The Fabric of Time

Another subtle way of playing with time is to take an element or group of elements and offset their timing so that they rush and delay uniformly but at different rates. For this particular example, I've taken the constant hi-hat pattern and left the first hi-hat perfectly quantized, set the second one back 192nd, set the third back twice as far (96th), set the third back 192nd and the fourth perfectly quantized.

In this way, the hi-hat begins to drift off time until it is off by a 96th and then it drifts back to create a slight swing while progressing at consistent increments. This is another technique implemented by drummers to help the groove expand and compress (however slightly or dramatically) to give the music and groove and new feeling.

Here, I have rushed as described above in the first measure and then delayed it in the same way for the second measure. I then repeated it to create a four bar loop of contract/expand/contract/expand.

A good way of thinking about this concept is to think of music as a piece of fabric. When you stretch the fabric, the threads offset more or less uniformly with the largest stretch occurring in the center and the sides gradually moving back to equilibrium. The exact same thing is occurring here, except we are replacing the threads with musical events to make time seem as if time is stretching and contracting.

These concepts are used by professional drummers all the time, and although you may be behind a monitor rather than a drum set, there is no reason not to implement these ideas to make your music swing and have a more 'real world' feel. In my next quick tip, we'll look at some interesting ways to divide the bar to create some off time and polyrhythmic feels without departing from common note divisions.