Ever have a mix where you wish the drums were bigger, more energetic, more in-your-face? I first heard about this technique in Bobby Owinksi’s, The Mixing Engineer’s Handbook, and it has since become a staple in my bag of tricks. The technique is a more aggressive take on parallel compression that can really add punch to your mix.

Before applying this technique I like to clean up the drums, getting them as close to what I want as possible.

Once you’ve got your original drum track sounding good, create a stereo aux input and set up buss sends from the original drums (not the outputs). The idea is you’ll have two sets of drums to merge later.

Once the buss is set up, go ahead and slap a compressor on it. I think the BF76 Bomb Factory plug-in does a great job applying some heavy compression without sucking the life out of the track, making it perfect for this technique.

Simply boost the input until you see the Gain Reduction meter pushing around 10 dB. Once you have that set, listen closely and adjust the attack until it sounds punchier and closer. Do the same with the release.

Next pull up your favorite EQ and boost the low end at around 100Hz and the high end around 10 kHz. Experiment to hear where it sounds best and don’t be afraid to get extreme with the boosting. I’ve used as much as 10 dB boosts before. 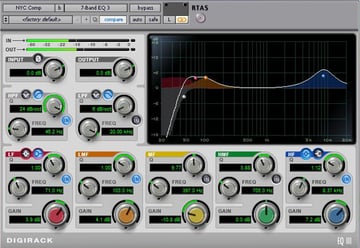 Now that you’ve got you’re buss track sounding big and in your face (and probably a little unnatural) it’s time to blend it back in with the original.

I usually drop the buss track fader to zero, and then slowly bring it up until I feel like the drums are really hitting, but before the compressed track becomes the more prominent of the two. Typically, I’ll then back it off a little, just to check if I went too far. Of course with some songs you may be looking for a more unhinged drum sound, in which case you’d really turn up the compressed track.

Most of the time I keep the level consistent through the song, but you can also use this technique to change the intensity of the performance and improve the flow of the song. For example, in this part the compressed drums are faded in over the intro so that as the drumming increases in intensity it gives a sense of momentum into the verse.

Like any technique, this may not work in every song; but when it does, it can really make a difference.

Aaron Straughan
Aaron is a freelance mixing engineer in Portland, Oregon. He is a recent graduate of Oregon State University where he studied business and music, specializing in audio engineering and composition.
Looking for something to help kick start your next project?
Envato Market has a range of items for sale to help get you started.