What is equalization? Equalization (or EQ) doesn’t change the frequency in any way really - it’s just a frequency volume control.

There are two different types of equalizers used. 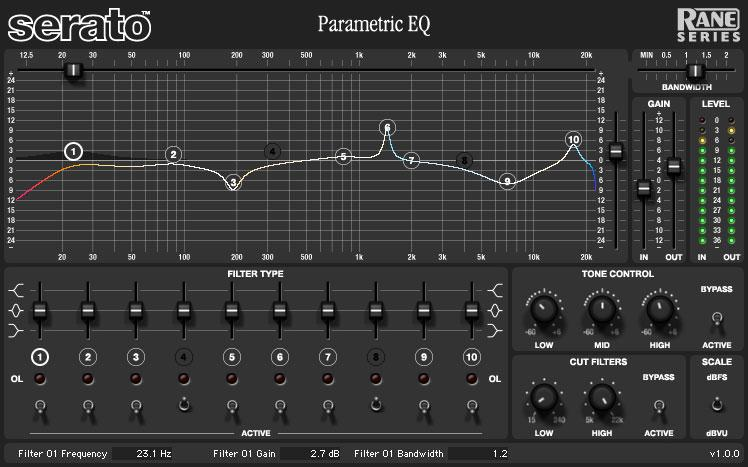 The difference is that graphic equalizers are usually used for “Corrective EQ” - turning problem frequencies up or down, for example finding and turning down feedback at a live event. (Problem frequencies tend to be 250 Hz and 1 kHz.) They also have fixed frequency settings so you can’t pick and choose what frequency to boost or cut, you alter what you’re given.

There are three basic controls on a parametric EQ. You will sometimes come across Gates etc.
Especially on Graphic Equalizers but I’m just going to talk about the main 3 on parametric.

Gain is of course the volume control, up and down for each frequency you select, they don’t usually go above +15dB of gain.

Q is the width of the of the frequency you are changing here is an example: 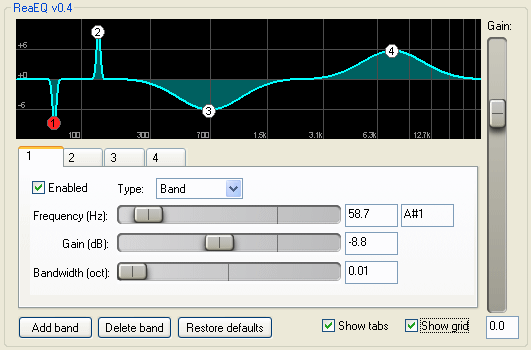 1 and 2 have a very narrow Q. 3 and 4 have a very wide Q. Wide Qs effect a wide range of frequencies, while a narrow Q effects only a narrow band.

Frequency just allows you to scan up and down the frequency spectrum to find frequencies you do and don’t like in your track.

Cut the frequencies you don’t want. For example, if you want the low end of your bass to stand out more, don’t just boost the lows or you’ll add extra gain and noise. You must first cut out some of the high/mid frequencies that you don’t want. Don’t just take it all out or you’ll be left with a very horrible, thin instrument that’s missing a lot of the fundamental frequencies.

By cutting Frequencies you don’t like, you’re also letting other instruments in the overall mix to filter through. This is important if your mix gets a little overcrowded.

This doesn’t mean boosting is a bad thing, but do it moderately and subtly. Just make sure you cut out what you don’t want first.

Too often people use an extremely narrow bandwidth to boost frequencies. There is nothing wrong with this really, but a narrow bandwidth will not changing many frequencies at once, and this will eventually cause your instrument to sound very unnatural. Cutting narrow is usually fine for taking out things like feedback and mud for example but for boosting I’d recommend a wider bandwidth.

Bleed can be considered both good and bad in a recording session, but when it comes to EQ and effects it can be quite bad. This is why most people like to record in separate rooms, but trying to record completely dry can lead to very unnatural sounding recordings.

If a snare sound bleeds into your guitar track, when you EQ your guitar you are also going to be changing the sound of the snare. There are ways to fix this but not always perfectly. Gates for example.

The guitar amp is much closer to the microphone than the snare, so the guitar will be louder on that track. Set a gate at a threshold so the track is only in use when the guitar is playing. To battle with this you could try putting an EQ filter or just cut out certain frequencies to try and clean up some of the bleed.

Ryan Coombes
Ryan Coombes is a dedicated music technology student. He spends most of his time mixing and recording music for himself and others.
Weekly email summary