Many of us work with Logic sessions that are huge and include a lot of assets. Using Folders is an effective way of tackling the many layers that Logic can have when you use it in a complex way.

Imagine, for example, a session where the drums have been recorded using ten microphones; that is ten tracks on your Logic session only being used by one instrument. Thinking in Folders becomes a great approach to packing all these tracks into a container, for simplicity. So you could easily go into that container, move it around, edit it and even re-record into that container. In this quick tip I will talk about using folders in a recording and editing context.

In Logic, there are two types of Folders that we can work with: there are Take Folders and Regular Folders. To pack tracks into a Regular Folder, make sure that you have selected the top track you want to include in the Folder, as well as all the other regions you want to pack in it. Once you have selected all the regions, in the arrange window local menu go to Region > Folder > Pack Folder.

You will notice that now you have some unused tracks on your session, which you can delete, since they are all included in the Folder you have packed. You can rename the Folder Track as you normally would any other track, by double-clicking the Track Header. You can also go to Region > Name Regions by Tracks/Channel Strips to make sure that the region is properly labeled.

Take Folders differ from Regular Folder because instead of playing multiple regions at the same time, a Take folder will only play one continuous region or a composite of multiple regions that belong to the Folder. In other words, a Take Folder is exactly what you get when you record several identical takes that then you can work on to create a comp.

Imagine, for example, that you have recorded a few identical vocal takes in separate tracks and now you need to edit them to create a comp with the best bits of every take. You can select all the regions that include these takes and go to Region > Folder > Pack Take Folder.

Working on a comp with a Take Folder probably needs a tutorial of its own, so, for the purpose of this quick tutorial, all we need to know is how to pack separate tracks into one Take Folder. 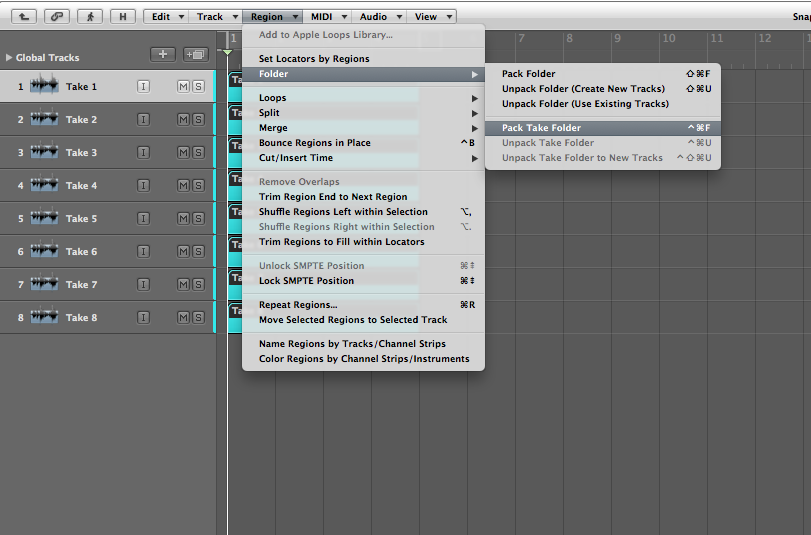 When recording a session, the time spent in the preparation of the project is essential to an optimal session. We all may have different ways in which we prepare a Logic session for recording. We may colour the track headers according to the instruments we are going to record, or maybe change the track icons to represent the instruments, group tracks in the mixer to control multiple tracks at once, etc. All this because we know that the more tracks we record on a session the crazier it gets to navigate and manage them later. In addition to all these tools, we can make use of the Folders to make the process of navigating through the session easier.

For instance, if you are recording drums with an eight mic set up, the number of tracks you end up with on a session tends to be pretty big because of the number of takes we tend to record. Folders can become very useful for grouping those takes as one, easy to handle, region. Each take then becomes a Folder which belongs to a main Folder that can be called according to the number of the take. Making the whole process of finding, moving and listening to each take a lot faster and easier.

Consider the drum takes we have just packed into Folders. Now that each drum take (containing eight tracks) is packed into one region, it makes it a lot easier to slice parts of each take and move them around to create a manual comp.

The beauty of doing this in the Folders is that we don't have to worry about manipulating multiple regions and worrying about cutting, copying or moving so many regions since we are only manipulating one Folder region at a time.

Another instance where I've found the use of Folders very handy for editing is when I would like to play around with the arrangement of a whole song. Sometimes, after we have completed a song, we may want to re-arrange it, maybe move a verse to a different part of the song, duplicate a chorus, move a whole section around. By packing everything into a Folder, it's easy to re-arrange whole sections of the song, instead of having to select numerous regions at the time and worrying about leaving a detail out of such selection.

The advantage of thinking in Folders is that every session, no matter how huge it may seem at first, can be grouped and managed in a much more efficient way. With this in mind, think of the many possibilities this opens for having a clean, tidy, efficient workflow in Logic. Through the use of Folders and effective signal flow, all of us can make the work so much simpler at every stage of the process. 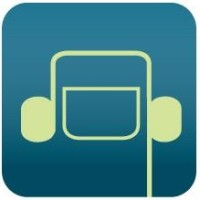