Sometimes the simplest device can be a source of a big idea. The thing is that the auto pan can trigger various tremolo effects but to do this you have use some adjustment on the default preset in order to use the auto pan as tremolo/vibrato effect.

So first thing is to create a sequence. Usually the tremolos are used on pad patterns. But in our case it will be a lead pattern. So create any kind of lead pattern or use of mine. Drag and drop a lead instrument. I used the Lead Agility Lead from Ableton's instrument browser. I lowered my pattern an octave but you can maintain the original is up to you. I used some heavy hall reverb and some delay on the return channels because the instrument is too dry to my taste.

You can listen how is it sound so far:

The Auto Pan originally offers LFO-driven manipulation of amplitude and panning for creating automatic panning, and amplitude modulation, and beat-synchronized chopping effects. Auto Pan's LFOs modulate the amplitude of the left and right stereo channels with sine, triangle, sawtooth down or random waveforms. 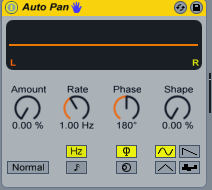 The principle which we will use is the phase cancelation effect. There is phase control in the device. Set this to "360 or 0", and the LFOs will be perfectly out of phase (180 degrees apart), so that when one reaches its peak, the other is at its minimum. Phase is particularly effective for creating vibrato effects.

Using this idea we can create some tempo bass envelope reshape tremolo effect. Very important is to examine your pattern before you set the tempo rate of your panner. In my case I decide the most suitable adjustment is the 1/8 or the 1/16. After that I try it and it was worked because I used 1/8 based notes most of the time. I set the amount to the maximum and the wave form to saw wave. Here you can listen how the pattern transform time to time into a vibrato lead while I automate the rate knob from 1/8 To 1/16. 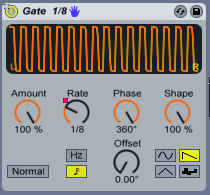 So now you can use your panner as creative tool. But don't stop there. What happens when we split the frequency range and use different tremolo on different frequency bands? In order to do this we have to use racks in our purpose.

So now duplicate our auto pan device which we had created earlier. Set the rate knob 1/16 in the first one and 1/8 to second one. Now group them and duplicate the chain and rename the first one to high and mid the last one. Now we have two channel vibrato.

Next thing is to split their frequency range. Use Multiband dynamics and solo the high band on the high channel and the mid on the mid channel. Now we have perfectly splitted two band tremolo. All we need this to turn on and off each device and set those into a macro control. I used those parameters which you can see on the picture.

Now you have the multiband vibrato auto pan device. Let's automate it and use it creatively during you set. Of course you can automate the rate and any other knob is up to you! Here the final example of the set: