Today I will show you how to use Reason's MClass equalizer as a powerful send effect. Everybody knows how to use an equalizer and how to boost or cut certain frequencies. But very few among them know how to use it as a creative tool. Let's get started.

First of all create a Combinator because we will program it later. Once you have done it create a simple line mixer inside the Combinator. Next right click on the mixer and create a MClass equalizer. It will plug into the mixer automatically and functioning as a send effect.

Next is creating any kind of instrument—your taste. I Created a Subtractor. I load up the Autum preset from the Subtractor's own pad library. Feel free to use another one or spare some time to program a whole new one by on your own. I create an RV7 reverb to give some space and some feeling to the instrument.

The next thing is to create a Malström but don't plug in anywhere yet. And last but not least make a Thor Polysonic synthesiser with same adjustments as the Malström.

So we have the basic rack. Load up any kind of pad pattern and play it here is mine: 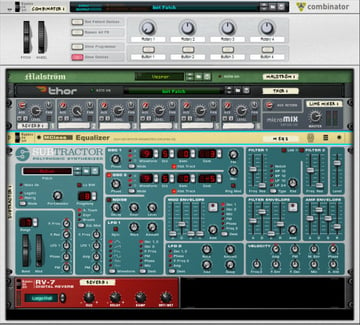 Now we have to program our MClass equalizer through the Combinator program section.

First of all we have to enable Parametric 1 and Parametric 2 on the MClass equalizer and set the gain knobs to 10 dB or different amount otherwise you won't hear any effect.

Let's select the Mq2 from the show program menu which just pops up. Let's select Rotary 1 as source and Parametric 1 frequency as target. Set the range between 320 and 845.

So what will this do? It will force the parametric frequency's knob to move between 295 Hz to 1.2 kHz.

We shall use the Malström mod envelope to control the rotary 1 and 2 with a predetermined algorithm or pattern. So first we must setup our mod envelopes.

Now let's attach the mod a cable to the Combinator rotary one. Set the Combinator's CV to 78. The mod B has to be plugged in Rotary 2 and the CV amount has to be on 104.

Now start playing any kind of pad pattern. You will hear the Subtractor only because we haven't sent our equalizer to the dry signal. Now set the aux one to 100.

You can hear how the equalizer sweeps through the frequencies and create some interesting effect. And you can clearly see what's going on if you watch the MClass Equalizer. It is definitely visible. But don't stop there create another modulation for example automate the send effect with a Thor LFO.

We will use the Thor only for modulating so it isn't necessary to attach the audio out anywhere on the mixer. 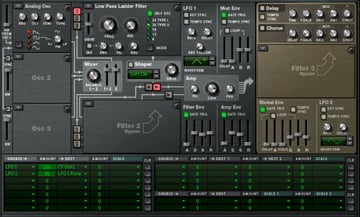 You can hear that some kind of weird tremolo effect is affecting our pad.

That's all guys I hope you enjoyed my tutorial. Try out different parameters and watch what happens. Happy music making! Bye!!!