Let's see what we can accomplish with faking a multi-mic recording technique.

Usually, when we are treating the same track with different things we use auxiliary sends and returns. But since we are going to insert a different Amp Designer on each track we don't want one Amp Designer interfering with the other. Therefore we are copying the guitar track below to another channel. 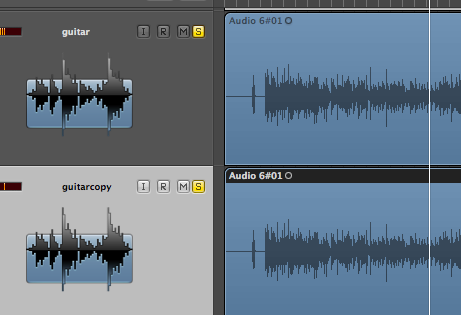 No tricks here. Of course, we could move the copied track a few milliseconds ahead to get an A.D.T. feel but that's not what we're going for right now. But by all means try that out as well.

This is the audio we're using. This is a DIed acoustic guitar into a Lexicon Lambda interface.

Insert the Amp Designer on the first track and tweak it until you are satisfied with the sound. I'm using a mock Vox AC30 type sound, or the British Amp with the British 2x12 cabinet. On the first track I have selected a condenser and positioned it so that it is facing the center of the cone. 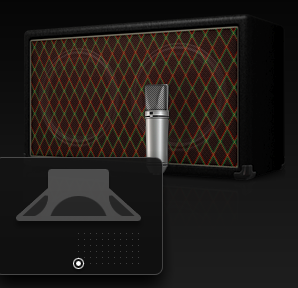 This is what only the condenser sounds like. A little harsh since it's positioned in the center, and due to the nature of the condenser has a full range sound that is a bit too dominant in the higher frequencies.

Step 3: Change the Position on Another Amp Designer

I'm inserting another Amp Designer, with the same settings as the one before. A British amp with a British 2x12 cabinet. The only thing that I'm changing is that I'm selecting the microphone source to be a dynamic and I'm placing it on the edge of the cone. 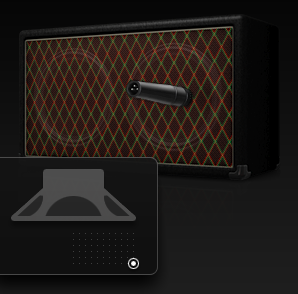 A little different, a little warmer and not as dominant in the high frequencies.

Now by playing both sounds at the same time we get a fuller and warmer sound. By joining these two microphone positions together we get two different sounds that compliment each other from the same performance.

Here is the end result.

When you are stuck with limited resources you can turn to fake mixing tricks like this. Of course it's not the same as if you would record an amplifier with two great microphones through two great preamps, but can serve you well in a pinch. With some more mixing, EQing, compressing and panning, you could create something even better.

You could take it even further, like I said before and add some delay for an artificially double tracked sound. By only using the different mic placements on the Amp Designer we are able to recreate, although artificially, the tried and tested techniques of multiple microphone recordings with great results.