It takes a lot more than good pre-production to make vocals sound professional in a track (although it certainly helps), and there are many ways to improve your mix. In Part One of this tutorial we had a look at the pre-production as well as how to mix lead and backing vocals together effectively with the use of EQ, compression and panning. This time take it one step further and add the sheen to the sound.

Just a bit reverb and it's done? Not quite. Read on…

I chose to record an acoustic version of Liberian Girl by Michael Jackson. Listen to the whole thing, here:

The lead vocal is, in most cases, the most important part of the track. It needs to be at the forefront of the mix but not necessarily over-powering. A good way to do this is to give it different tonal qualities - in this case, adding a bit of saturation.

I've used the PSP Vintage Warmer - as a Send, not an Insert - to beef up the sound. It adds a bit of drive and colour at selected frequencies. 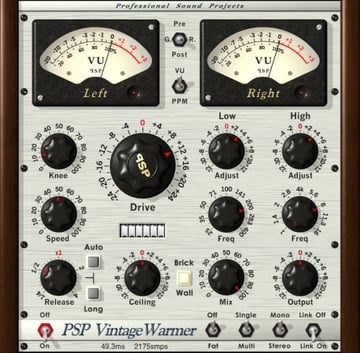 As you can see, I've boosting around 220Hz and 8kHz. The former to boost the bass slightly and the latter to bring out a little of the sibilance and harmonics. All of this helps to bring the vocal to the front.

STEP 2 - Give the Lead It's own Reverb

Rarely do I use just one reverb in a song and when it comes to vocals, I almost always use a different one for vocals and backing vocals. This helps to separate the parts more and allows them to sit in their own space.

In this case, I've opted for a convolution reverb - Logic's own Space Designer.

The Attack and Decay time are relatively fast to ensure it doesn't cloud the mix too much. 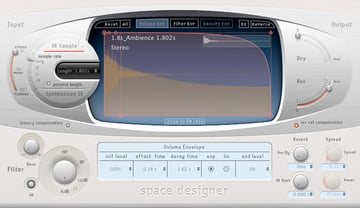 To make sure the reverb doesn't over shadow the vocal I inserted a compressor on the reverb channel and used it's side-chaining function to keep the reverb in control. The key, or side-chain input, is set to operate from the lead vocal track itself. 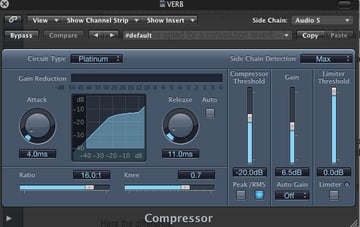 STEP 4 - Separate the Lead From the Backing

As mentioned earlier, giving the backing vocals a slightly different reverb from the lead can help to give them both their own space. Using the side-chain technique on these as well is optional, but for this song in particular, due to it's atmospheric nature, I chose to leave the reverb straight.

This also helps to push them back in the stereo field, keeping them further separated from the lead.

The actual reverb sound itself is very similar, without the side-chain function it allows the backing vocals to sound a little more hazy and distant.

To further increase the airy sound, I inserted an EQ on the reverb channel and filtered everything below 1kHz, with a small increase at 10kHz.

This helps to add contrast to the lead vocals and, once more, separation.

Listen to how it adds air to the lead:

The last section of the song incorporates a high number of vocals. Instead of using different reverbs for all of them and risk causing a blurry mess, half of them simply were left without it altogether.

I then added a small amount of chorus. Although it's fairly subtle, the combination of the completely dry sound, slightly doubled, gives it a little more colour.

Have a listen - the chorus will click on half way through:

STEP 7 - Put It All Together and What Have You Got?

If you listen to each part separately - Lead Vocals, Backing Vocals one and two - they don't sound particularly special on their own but as they all blend together they all fill their own space in the mix. With all the parts playing at the same time you will notice how the three-dimensional image forms.

The following clip begins with the dry backing vocals, followed by the wet - with reverb - ones, and finally by the lead. Then so you can hear them in the track itself, the rest of the instruments appear.

There are many other ways to help make vocals - and other instruments, for that matter - occupy their own space in the mix (I haven't even touched on delay, for example), but hopefully this will give you a taster of what you can do just with (or without) the use of reverb.

The main thing is to think that not only visuals can be in 3D - audio can too!

James Arter
James Arter is a song-writer, producer, and multi-instrumentalist. He holds a First Class BA (hons) degree in Music Technology, at the London College of Music, and produces his own music as well as others. He fronts a band called DiceJar and is also part of the music production duo, Happy Bunny // Poison Peanut.
Weekly email summary