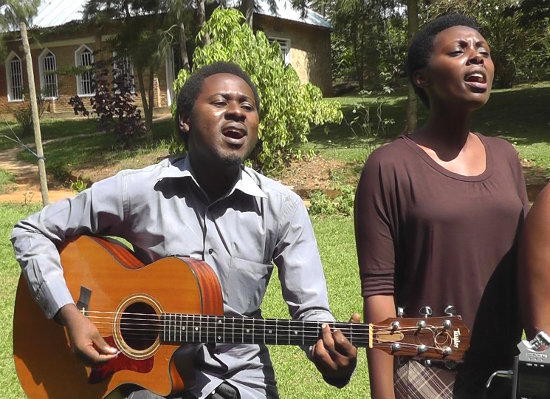 On a recent trip to Africa this earlier this year I had the privilege of working with a local choir and conducting a songwriting workshop with them. After some initial discussion they began to write songs working in small groups together and came up with some really exciting, vibrant new ideas.

Soon it was time to make demos of all the new songs. For this purpose I had taken along my Zoom H4n portable recorder. The overall aim was to eventually record a new CD with full band arrangements and vocals, so the demos would later be discarded and were needed only to provide a clear simple performance of each song as a starting place for the studio band arrangements to follow.

What I needed to hear was a clear simple melody, and some idea of the overall speed and rhythm. I asked that they keep the performance arrangement very simple and provide me with a clean written out version of the lyrics at the end—with a rough translation in English.

All of the groups did a very good job focussing on the singing—they actually provided very little in the way of instrumentation, just a couple of hand drums and maybe an acoustic guitar as well. One group used a keyboard, but I decided to just keep things simple and record in stereo using the built in microphones and avoiding going four-track with additional line inputs.

The weather was fine and sunny and the location quiet, so I decided we would record everything outdoors to avoid any room noise. This proved to be a good decision as it was possible to hear everything very clearly without any added room ambience.

Here’s an excerpt from one of the songs that we later chose for the CD:

There were 21 songs in all. Some were more influenced by western music styles but the song above has a lot of Congolese influence in the way it is written; upbeat and a clear pulse but a rather fluid groove and plenty of cross rhythms.

Somehow the singers know when to come in, or mostly they do. I’ve already started working on this song arrangement, now I am back in the UK, and have tried to mimic the groove as far as I can. I’m trying not to think too much about what time signature it might be in.

Here’s another rather unusual song excerpt, this in a typical rural village style:

The guys in this group were trying to mimic the kind of singing one might find in a bush village sung by tribal elders. They were doing quite a good job judging by the laughter and reaction of the others present.

Most field recorders are designed for ease of practical use—just switch on, hit the red button and go—but here’s a few things to think about that could possibly help you avoid possible pitfalls later:

Once the recorded files were copied to the laptop and everyone had gone home, it was time to listen back and see what needed to be done to just tidy things up a bit. I used a copy of WaveLab 8.0 to edit the recorded demos.

On importing each song, the results seemed clean enough, but the levels were definitely a little quiet. The overall eq seemed good with the treble nice and clear, but I did feel each song could do with a touch more warmth and body. I decided to add a little tube compression, and then normalise after topping and tailing each track.

The 12 songs that were finally chosen all had this treatment, and were saved to an external drive on a separate folder. Somebody wanted MP3s of these stored on their phone, so that was another job to sort out.

Apart from the project song demos, I did manage to record the whole choir singing together on a couple of occasions. I wanted to do this to get some impression of what their group vocals could sound like, since we are planning to work together later in the year and I will need to record their vocals properly in a studio to the finished backing tracks.

It wasn’t possible to choose where this happened as the group are naturally spontaneous, so both examples I have here were recorded indoors, in a small hall:

I didn’t, unfortunately, get the beginning of this song event, as it was already happening when I arrived.

Maybe this is an obvious thing to say, but the watchword of any travelling ethnomusicologist—or recorder of ethnic folk music—is to be ready for anything at a moment’s notice. It’s just a great feeling to know you pressed record in time to catch the start of something special!

My final example was actually a request on my part for the choir to sing together unaccompanied. I always feel that there’s a risk with this kind of thing, as the group are by definition not singing in a spontaneous way. But anyway, they obliged me and here’s the result:

I hope these two articles have been informative and useful in encouraging you to get creative with your portable recorder. They are such handy devices and people use them for all sorts of reasons. As I’ve indicated, ethnomusicologists use them routinely to research, collect and archive interesting musical events on their travels, so if you’re planning an interesting trip to somewhere exotic and are likely to come across local musicians, it’s definitely worth thinking about.

I’m currently reading a fascinating book called Adventures in Music and Culture by Rob Baker, published by Ambassador International, which documents his recent travels in Mali—highly entertaining and a must read if you love music, culture and travel like I do.