Welcome to the fourth and final part of my series of tutorials on recording your first song. I’ve introduced a lot of terms, ideas and techniques with the hope of giving you the background to tackle your first attempts at recording and to inspiring you to read and learn more.

Now it’s time to put the theory into practice by taking a simple set of musical ideas, growing them, and building up a final track.

Our focus here is recording, but I want to show you how your DAW can be more than merely a recording studio and become a part of the creative process from the very beginning.

I opened up a default drum loop in Logic to spark some ideas, and spent some time trying riffs and progressions over the top until I hit on something I liked:

I’m not going to win any song writing prizes, but it’s good enough for my purposes here. So where does that idea lead? What other ideas does it suggest? You can find out through musical theory, by keeping on playing, or by staring out of the window running ideas in your head until inspiration hits.

Personally, I’m in the latter category, and I can see this first idea a big, noisy, release of tension, so I want something quieter and more tense to serve as a verse part – something that poses a kind of musical question to which my first idea can be the answer.

That sounds pretty good. It’s kind of angular and muted and builds a little tension that needs to be resolved, so the first part I came up with should come as a nice release.

In trying to find that second part, I hit on something else which wasn’t right as a verse but nonetheless I wanted to keep. It sounds like it might work as a bridge or middle section, so I’ll keep that for later.

So following this principle of building out from a single idea, we can fairly quickly arrive at the bare bones of a full song. 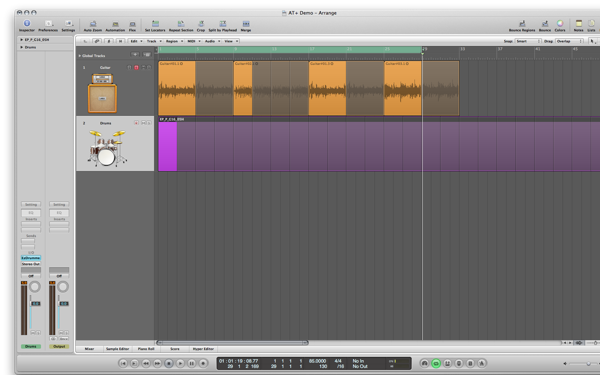 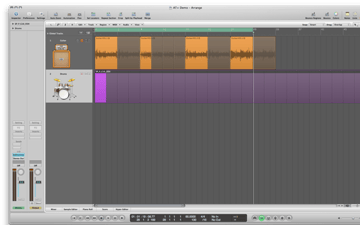 This is where the DAW comes into its own. By using the cut, paste and loop tools, I can use those rough snippets to arrive at an arrangement for my song by just moving and repeating the building blocks. It’s a bit like writing a letter by jotting down the ideas you want to communicate, fleshing them out into coherent sentences and paragraphs, and finally moving those around into a coherent whole.

I wouldn’t call my arrangement great, but you see the idea taking shape. Don’t worry that it sounds rough at this point – it’s just a sketch that we’re going to fill out.

With an arrangement in place, I can do away with that drum loop and begin to program my own drum parts that suit the parts of my song. So all I’ve done here is to put in a basic drum part for each segment of the song and loop/copy it to all the appropriate parts.

Now, you’ll recall from earlier in the series that we can make that sound a little more interesting and human by using a mix of manual and automated techniques. First, I’m going to manually add some variation to the drums by chopping the loops up into free standing sections and doing my best to make it sound like somebody actually played the parts. 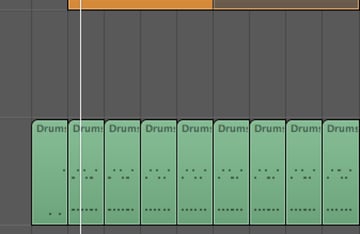 Then, I’m going to use Logic’s humanize function to vary both the position and the velocity (the strength with which the notes are hit) to make things a little less robotic.

There, just a little variation has made that much less stiff and tiring to listen to.

Using the same principles, you can program any instrument you like. For this track, I’m going to program some bass just to fatten up the guitars.

Now those guitar loops can be replaced with a new, live take. As I’ve already arranged the song and programmed and humanized the drums, I’ve got some dynamics to respond to and I can rehearse to my heart’s content to get the performance I want.

Again, not a world beating performance but much better than those loops. You’ll notice that I decided to use two guitar sounds, a distorted one and a cleaner one, to help reinforce the dynamics between the parts of the song and create some interest. I’ve also doubled the distorted guitar for a thicker sound, panning them to far left and right, while leaving the cleaner sound nearer to the middle.

I’m starting to get a problem with noise, but I’ll deal with that in a moment. First, I want to create a submix for the guitars and add some reverb and other effects.

You’ll recall from the second part of the series that we talked about some basics of routing. What I’ve done here is divert all of the signal from my guitar tracks into another track, a buss, onto which I can apply some overall effects.

In this case, I’ve used some EQ to reduce low end frequencies, leaving more “space” in the mix for the lower drums and synth bass to be heard. I’ve also boosted a little around 2 kHz, just to give them a little more bite, and also rolled off high frequencies at about 11 kHz to get rid of some fizz and leave room for the cymbals.

Finally for the guitars, I’ve added some compression and routed part of the signal to a reverb aux, just to “glue” them all together a little and add a sense of space.

The drum plugin has a nice room sound of its own so there’s no need for much reverb there, I’ve just added a tiny dash just to try to give a sense of them sharing a space with the guitars. I've also added a little compression, and some subtle EQ to enhance the kick drum and the snare. Note that, for simplicity, I'm using my drum plugin's stereo output rather than multiple outputs.

Now I want to fix the noise from the guitars, and while I’m at it, since I’ll be doing some snipping, I’ll use Flex Time to tighten up the timing too. I’d already taken every precaution to keep from recording unwanted noise in the first place (lights out, away from the monitor, etc.), so all I’ve done to treat the noise is to cut out sections of the audio tracks where the guitar isn’t playing, and add a subtle noise gate.

With Flex Time, I wanted to maintain the fairly grungy sound of this track so I haven’t put everything bang on the beat. I’ve just moved things enough that the track has a little more punch and cohesion. Lastly, I made a couple of small changes to the drum track just to make things a little smoother and match better with the edited guitars, and added a little phaser to the cleaner guitar.

So you see, in a few relatively simple steps, we’ve gone from a basic idea and some scratch recordings to what’s shaping up to be a decent sounding first recording. A little more work, some more instrumentation, and we'd have a finished article that could be mastered and polished or shared with band mates.

As ever, each stage of this tutorial could be a tutorial in its own right, so I strongly encourage you to read around and most of all play around with your DAW and musical equipment to keep learning and gaining experience.