In a previous tutorial I introduced the Rule of Three, a concept used widely in the visual arts, and discussed how it could be applied to music for composing melodies. It's a very effective rule of thumb for balancing the musical principle of repetition and variation.

This time around I'll demonstrate that we can also use the Rule of Three from a different perspective and apply it to orchestration and arranging. When you simplify a score down to its basic elements, surprisingly you will find that the music rarely goes beyond a three layer texture.

The Rule of Three as a Guideline

It's important to note that the only connection between this tutorial and the previous one is the idea that "3" is a very useful number when it comes to music, as well as art in general. But the way the Rule of Three was applied to the melodic aspect of composing music is unrelated to what we're doing here.

Despite the name, the Rule of Three is not really a "rule" but more of a guideline for how to approach your work. There are plenty of times that having only one layer, two layers, fifteen layers, etc. are all legitimate and excellent choices to make. What we'll be examining here is how you can use a basic principle to produce consistent results, and then from there you can use your artistic discretion to decide how and when to apply it.

A universal terminology doesn't really exist for these concepts and different people will have different names for things. In general I'm going to refer to a "layer" or an "element" as a single musical idea.

For example, a solo melodic line is one element:

And for our purposes, a chordal texture or group of instruments that are acting as a single unified unit will be considered one element as well:

Two distinct melodies in counterpoint would be two elements or two layers (not that the bass is one melody, just in octaves):

A melody and harmonic accompaniment can also be two layers:

And even a complex texture can be broken down into three layers: a melody harmonized in thirds (violin I and viola), a counterline (english horn), and harmonic accompaniment (low strings).

The Rule of Three and Orchestration

The gist of the Rule of Three as it relates to orchestration is this: Three is the perfect number of elements to have at once for a full sound that is interesting but still relatively simple. Beyond three the texture begins to become too complex and your ideas lose more and more clarity with each layer you introduce.

To someone who is new to orchestration, a full orchestral score can look remarkably overwhelming and daunting to understand: 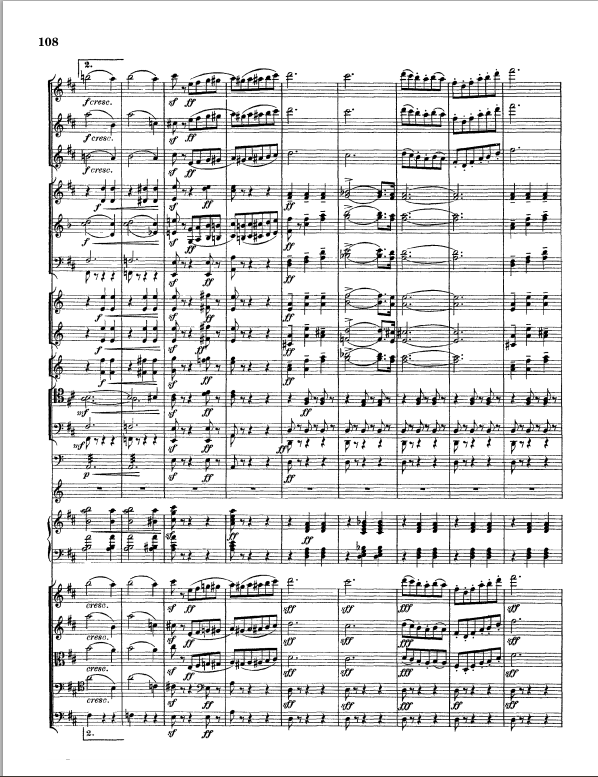 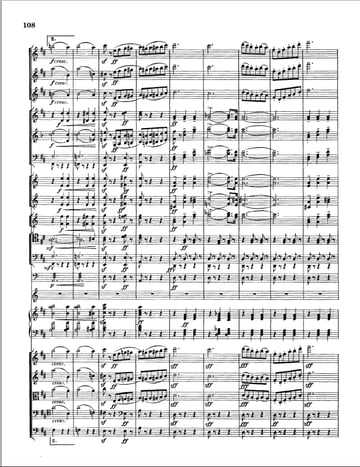 But if you look a bit closer, you can reduce unisons, octaves, and instruments that function as a unit into just a handful of different ideas.

That page covered in notes is really just three ideas: 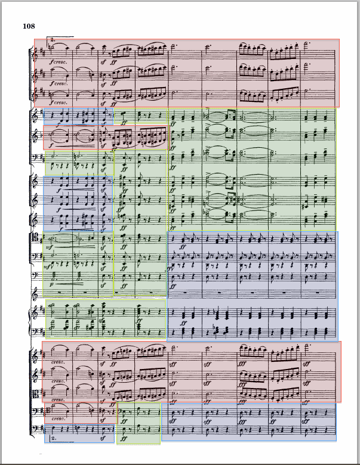 Many beginners assume that a massive sound requires a massive number of ideas at once, but this isn't actually the case. Unless you are intentionally trying to create a sense of chaos (like in the complex textures of The Rite of Spring), if you want your ideas to be heard you need to make them as clear and focused as possible. And that's where the Rule of Three comes in.

Tip: If you want proof of how a huge orchestral sound can be achieved with only a few layers, follow along the score to the first movement of Tchaikovsky's 4th Symphony while listening to a recording. With just a few moments of exception, the entire 17 minute movement can be reduced to only two layers the entire time!

A Case Study - The Nutcracker

Tchaikovsky's Nutcracker Suite is one of the most famous orchestral pieces in history and is generally considered a model of great orchestration. Even people who say they don't like classical music love The Nutcracker!

Pulling up practically any page of the score will demonstrate for us that three layers is all you need for a rich and complex sound that is still clear and balanced.

The overture starts off with one layer: a melody in violins essentially harmonized in a four part chorale texture. The violins and violas are functioning like a choir, with each line in concerted rhythm with the melody, essentially acting as a single unit.

In Bar 9 the texture breaks into two layers:

Bar 17 is where we get our first three layer texture: 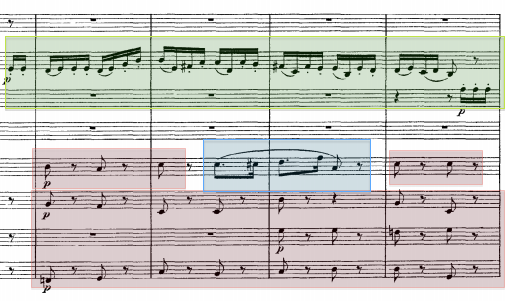 At rehearsal letter "B" we have our biggest section so far, almost the entire orchestra is playing at once and the volume is mf, the loudest we have heard in the piece. Things must be getting complex by now, right? But not so, we are still on only a two layer texture!

Everything after this point, except for the repeat of the section at Bar 17, is two layers. The three layer texture is as complex as this piece for over 30 instruments ever gets, and rarely when at all!

Just like the overture, this movement opens with a melody harmonized in a chorale style, essentially given us a single musical idea.

At Bar 4, when the melody, moves to the violins, we have a three layer texture:

The accent in Bar 8 is simply that, an accent moment that as we know by now is just a single idea despite being played by almost the entire wind ensemble. 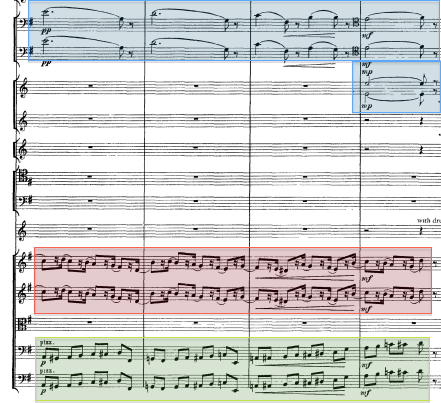 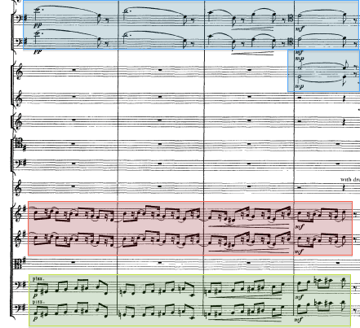 These two alternating textures make up the next 32 bars of music, either through repetition or variation.

Trepak is a fantastic piece for study because it's a perfect demonstration of a full and exciting sound for orchestra that can be broken down into at most three layers at a time, and very often two.

I want to keep hammering home the main lesson of this article which is that complexity and richness is not achieved by cramming in as many different ideas as you can all at one time!

The piece opens with a two layer texture:

At bar 5 we move to a three layer texture:

Now it gets interesting because we have these first 16 bars repeated, but this time at fortissimo (ff). The sound has become much bigger, more exciting and fuller, but the core layers remain exactly the same! 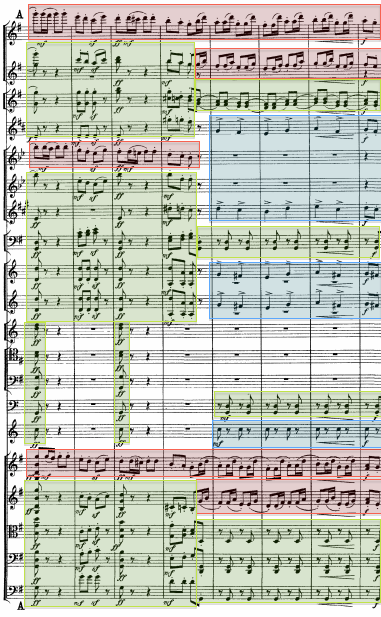 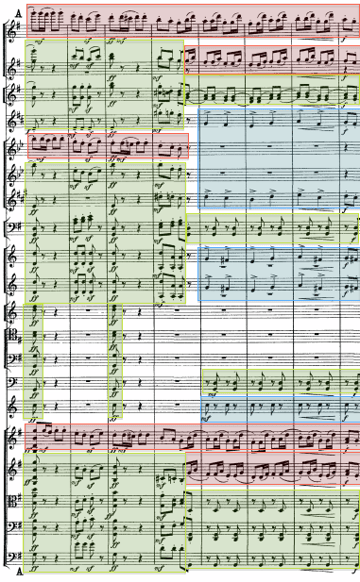 Pay attention to how the percussion is being used! Both the timpani and tambourine are hitting accents and beats that already exist in the other layers. If you come from a pop/rock/jazz background like I do you might be used to throwing down a drum loop or the equivalent of a very busy "drum set" like part.

But that's not how the great orchestrators of the past thought about percussion. Instead they used it sparingly and for color, not to compensate for a lack of energy or drive in the other parts.

For the last example I'd like to look at one more example of three layers: an ostinato, a harmonized melody and a single line countermelody.

Dance of Merlitons opens with a pizzicato ostinato pattern on violas, cellos and basses.

This is a standard oom-pah type of figure (left hand bass note, right hand chord), and despite the fact each instrument has a unique rhythm, when they play together they clearly are functioning as a cohesive whole. The opening figure is just root and fifth, but as the melody develops it becomes even simpler and is just a single line bass in broken octaves.

The flutes are harmonized in three parts. Again, the three players are all playing a unique melody, but our ears obviously group them into one.

Finally our third layer is brought in to add some color and variation to the second four-bar phrase of the melody, a legato counterline in the bassoon. 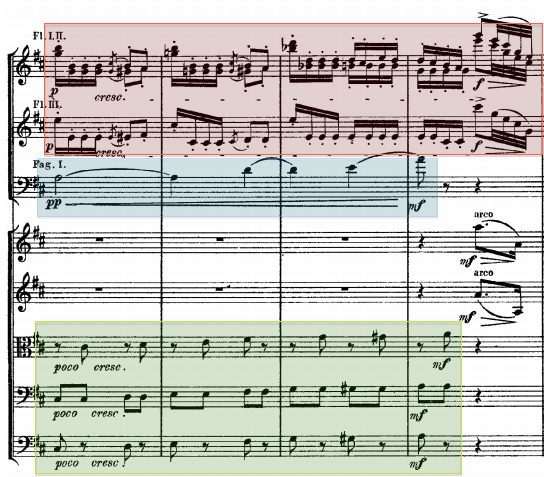 A major function of this bassoon part is to help give body to the crescendo.

And it never gets more complicated than that.

Despite there being as many as seven notes at once on any given beat, the way they are grouped together makes this in reality a two layer texture. It almost goes without saying, but obviously the fact that each layer is a single timbre makes them much easier to hear as one instead of many (flutes only, as opposed to flutes and violas).

In general, when one layer is in harmony the other layers are in unison or octaves. This is because a chordal texture is full, and so too many harmonized sections would not only risk clashing but also risk becoming very murky and too thick.

Strength comes from dynamic markings and using more instruments to support an element, not by having every instrument do something different.

The Nutcracker Suite is among the most beautiful and resonant orchestral music ever written, and it never violates the Rule of Three! Whether it's for intimate quiet moments or exciting and forceful gestures, the seemingly complex page covered in black notes can be reduced down to just a handful of elements. And as we've seen, these elements abide by the Rule of Three and never become more complex than necessary.

What do you think? Have you heard this three layer idea used in other styles and genres? Can you combine seemingly disparate instruments into what is actually a single idea (e.g. electric bass and drums)? How about exceptions to the rule that work beautifully?

Leave a comment with your thoughts of how you can apply this to your own music!

CompositionMusic Theory
Did you find this post useful?
Yes No
Would you like to provide feedback (optional)?
Cancel Submit
Want a weekly email summary?
Subscribe below and we’ll send you a weekly email summary of all new Music & Audio tutorials. Never miss out on learning about the next big thing.
Sign up