Twice a month we revisit some of our reader favorite posts from throughout the history of Audiotuts+. This tutorial was first published in December 2009.

Imagine the precious seconds you lose every time you take a simple action via a menu option or clicking a button on the screen. Once you memorize a set of keyboard shortcuts and make new shortcuts for tasks you find yourself doing frequently, you begin to save a lot of time. You’d be surprised how quickly those seconds add up into minutes and hours. Here’s a cheat sheet of common keyboard shortcuts you should memorize, along with a quick primer on using the Keyboard Commands manager.

This is the third tutorial in a short series on helping you save time in Logic Pro 9. We’ll be covering:

You can see all of Logic’s keyboard shortcuts in the Keyboard Manager. I’m listing them here because there are so many, you many have trouble figuring out which ones to memorize. The follow shortcuts are the ones that will really make working with your projects much quicker. Secondly, you can print this reference out and look at it as you use Logic — as far as I’m aware there’s no keyboard shortcut cheat sheet that comes with Logic.

We won’t cover the standard File menu shortcuts that you should know from using computers in general, though I will reiterate that Cmd+S is the shortcut to save your project and you should make it a goal to get this shortcut to become a subconscious habit so you’re saving your work all the time and don’t need to think about doing it.

This is by no means a comprehensive listing of shortcuts. It’s not meant to be — these are the ones that are actually useful in a day-to-day project setting, with none of the more obscure and less useful shortcuts in the way.

One of the reasons that set of keyboard shortcuts is so useful is because it allows you to record-arm a track, start recording, stop recording and playback, and navigate. In other words, there’s no reason to reach for your mouse when you are tracking.

Logic’s designers realized that the most useful shortcuts are the ones that enable the user to do things easily reaching over for the keyboard while standing at a MIDI controller or microphone, so they made the Apple Remote work with Logic. If you managed to get in on Macs while they were still shipping with the machines themselves, or have bought one separately, here’s what you need to know, in the format of Button: Function:

With hundreds of preset key commands and hundreds more unassigned commands, you can’t be blamed if you feel you need an aid to remember what everything does. Fortunately, you can get overlays for your keyboard that help you remember keyboard commands.

You can get these in varieties for most Apple keyboards and Apple laptop keyboards here. There isn’t much support out there for non-Apple keyboards, which is unfortunate as their keyboards and mice are utterly horrendous from an ergonomic perspective, but you might get lucky with some research.

Many of the commands that can have keyboard shortcuts assigned to them do not, by default, have any shortcut bindings. For any of the more advanced commands, you’ll need to assign your preferred key combo. Let’s take a quick look at how the manager works. 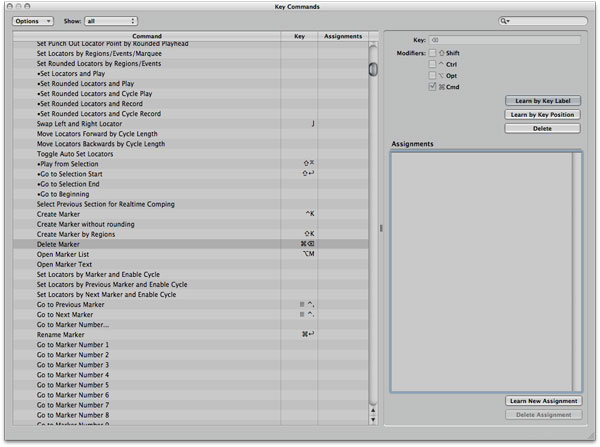 The Options menu provides you with the ability to select preset key command lists based on your keyboard type, or import someone else’s set. You can also export yours. Once you’ve got a custom setup perfected, I recommend you export your key commands and back them up — you won’t know until you lose them how important they can become to your workflow.

The list box shows you all possible commands, grouped into areas of relevancy. This is where you select the commands you wish to create or replace shortcuts for.

Once the desired command is selected, any keystrokes you make will be interpreted as the new shortcut. Be careful about overwriting shortcuts by accident! Unless I have missed something, there’s no Undo option.

There are three buttons on the right:

Beneath those buttons is the Learn Assignment section which is for setting commands from a controller. You can read more about this process here.