Ever felt like the default screensets offered by Logic just don’t suit your style of working? In this first tutorial on helping you make the most of limited time in Logic Pro 9, we’re looking at how to customize your workspace, and then save, organize and recall these workspaces as screensets.

This is the first tutorial in a short series on helping you save time in Logic Pro 9. We’ll be covering:

Before we start saving workspaces, let’s run through some ways to customize it.

The first thing I like to do is pull out views I use regularly into their own windows. You do this by clicking and dragging the view’s tab. For instance, click and drag on the Mixer tab and you’ll turn it into a separate window. Repeat this for everything you use often. Unfortunately, this doesn’t work for everything. You can’t separate the Media inspector or the Notes window. Most things you’ll do okay with, though.

Here’s a screenshot of a workspace with various separated windows:

What’s your preferred zoom setting? Do you like to work with a bird’s-eye view or prefer to stay up close and personal? Most people will switch between the two depending on what they are doing.

Logic allows you to set a default zoom setting for your screenset. Do this using the controls in each window that can be found adjacent to the vertical and horizontal scroll bars.

But you can also program key commands to save and switch between three preset zoom levels for each window. By default, these functions aren’t bound to any key commands, so you’ll need to set them up yourself. To do so, press Option-K and the Key Commands window will appear. Use the Search field to find the Save as Zoom commands: 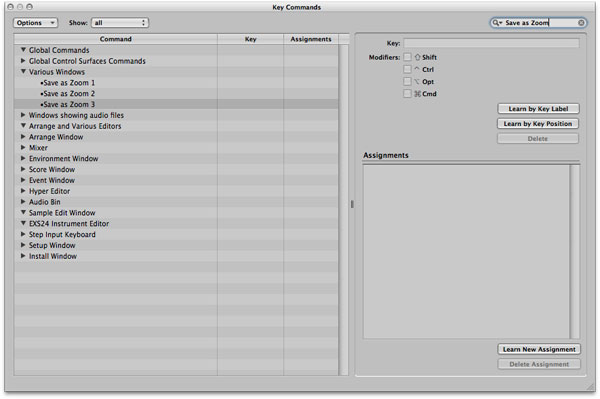 Select one of the three Save as Zoom commands and click on Learn by Key Label and press the key combination you want to associate with the command. Search for Recall Zoom and do the same for the three settings. You now have key commands that allow you to save and recall zoom settings for each window in your screenset.

You can also customize the transport bar and Arrange toolbar, the two most button-populated areas of the screen. This is a really simple process. You can customize the transport bar by right click on it and clicking “Customize Transport Bar”. You’ll be presented with a large window of checkboxes. Tweak this to present all the things you use regularly and none of the things you don’t.

Similarly, right-click the Arrange toolbar and click on Customize Toolbar. You can then add and remove the options you find most useful from the bar.

One thing that drove me insane when I first started using Logic was trying to figure out how to switch the bar meter between the bars & beats display and the time display. Eventually I discovered this little button to the right of the meter:

If you click on this you can decide how to display the meter in your workspace. Really important setting to change for your screensets depending on which tasks you’ll be conducting.

There’s more you can do to customize your workspace. Get everything right so you feel like the layout works really well for the task you’ve designed it for.

Creating a new screenset is really as simple as getting the layout right. Logic saves your screensets on the fly as you create them! Be careful about overwriting existing screensets this way.

To create a new screenset without overwriting a new one, press any number except for zero that doesn’t have an existing screenset on it. If it’s a two digit number (you can’t do three digit numbers nor numbers with a zero in them), press Control and the first number, then release Control and press the second number.

This will switch you to the screenset of that number, and you can go about customizing the workspace as discussed earlier.

Of course we’ve essentially covered the matter of switching between screensets simply by learning how to create them. But, there are two alternative ways to switch.

The first is to navigate to the Screenset menu at the top of your computer screen and select from the list presented there.

Secondly, you can use the Key Commands preference window we discussed earlier to set key combinations for the Next Screenset and Previous Screenset key commands. This is handy if you have a bunch of screensets and don’t remember what each of them are numbered. You can simply toggle through them until you find the one you’re after this way.

Renaming: It’s hard to remember what your workspaces do based on simple numbers — fortunately, we can rename them. Navigate to the Screensets > Rename menu option to bring up a dialogue box allowing you to rename screensets. You can enter just about anything here, or you can use the Auto Name button which will come up with a name based on some of the visible windows.

Deleting: To keep slots for new screensets free and keep clutter away, you can also delete screensets. That’s simply a matter of using the Screensets > Delete menu option (make sure the one you wish to delete is selected, or you might throw away hard work by accident!). Be careful—for some reason, Logic doesn’t ask you to confirm the deletion.

Copying: If you want to use an existing screenset as a basis for a new one, you can duplicate it. Simply use the Screensets > Duplicate menu option and type in a new number to duplicate the settings to, and optionally, give the new one a name.

Locking: As we’ve seen it’s incredibly easy to alter existing screensets. If you don’t want to let a screenset be altered after you’ve spent heaps of time making it perfect, simply activate that screenset and then use the Screensets > Lock menu option. You can undo the lock the same way.

Importing Screensets From Another Project

In order to really save time, you’re going to need to be able to reuse these screensets in other projects. Logic provides no easy way to create a universal set of screensets, so you’ll need to import them from project to project, or, as we’ll cover in the next tutorial, include them in a template. Including screensets in your templates is by far the best way to make use of this feature.

We’ll be using the same feature I taught you about in this tutorial, so open the Media inspector and switch to the Browser tab. Navigate to the project in question, select it, and press Import. Now click on the Import Project Settings button at the bottom of the Browser window.

Did You Screw One Up?

That’s okay! Logic allows you to return the screenset to the state it was saved in before you switched to it again. Simply use the Screensets > Revert to Saved menu option.

This tutorial may not have provided you with new ways to manipulate your audio, but it has the potential to make your day less frustrating and save you plenty of time. Coupled with the next two tutorials, you’ll be a music production productivity powerhouse (unfortunately, I don’t get paid extra for alliteration). Hope you’ll stick around for them!