In the precious minutes it takes from the time you have a great musical idea to loading up Logic and configuring a session, you may have lost the creative spark required to get it down and expand on it. Save yourself the hassle by creating templates that suit your way of working in Logic.

This is the second tutorial in a short series on helping you save time in Logic Pro 9. We’ll be covering:

Templates are essentially Logic Pro projects, but Logic treats them a little differently—it basically makes a copy of your template and renames it when you start a new project using the template as its foundation.

In addition to being able to make your own templates—which is where, in my own opinion, the real power of templates lies—Logic comes with several useful templates itself. These aren’t tailored to suit your needs or workflow, but if you don’t have your own templates yet, they can be useful.

Logic’s default templates are divided among three groups: explore, compose and produce. Each of these sections includes an empty project option (essentially, a non-template!). Logic’s descriptions are a bit scant and it would take an hour or two to take a good look through each template, so we’ll quickly summarize what each contains for you.

These require less explanation of what’s inside than other templates, so I’ll be briefer.

Creating Your Own Templates

What if none of these templates suit you? The only one I ever use personally is the stereo mastering template. The solution is to create your own. You can start with an empty project, which is my preferred method, or you can take a project with which you were particularly happy with the workflow.

If you are going to have a lot of templates for different purposes, the first step you should take is to navigate to ~/Library/Application Support/Logic/Project Templates. This is where Logic saves your templates, and you can add folders inside this one to categorize your templates. I like to get things organized before I begin so everything has a place to go (at least for me, the alternative is that things never get organized).

Now, set up a project so that it contains everything you want to see when you open up a new project for a particular purpose. We’ll look at the various things you could do here shortly.

When you’re finished, go to the File menu and choose the option Save as Template. A dialogue box will appear allowing you to choose a name—make it something descriptive.

Your template will, by default, be placed in the aforementioned Project Templates folder. When you start a new project in Logic, you’ll see the extra templates under My Templates:

Now, move the project to one of the folders you’ve created.

Next time you start a new project in Logic, you’ll see something like this: 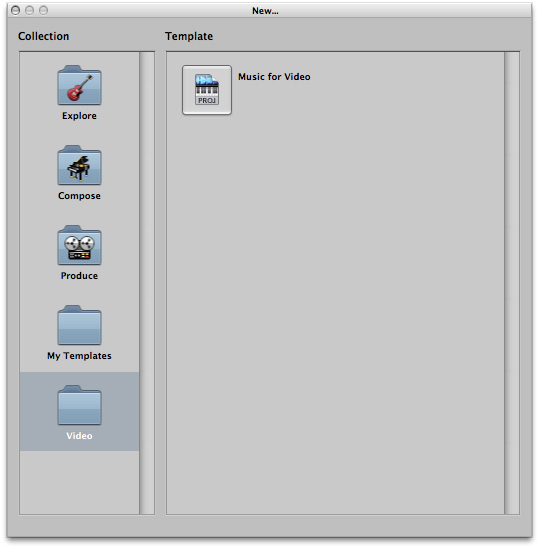 What to Include in Your Templates

Just to get you thinking about the various possibilities, here are some ideas:

The list of possibilities is about as long as the number of things you can do with Logic. There’s no need to be a minimalist — create a template for every occasion! If a bit of time spent now saves you time in the heat of a creative moment, you’ve done your job.