In this tutorial I'm going to show you how to combine the sequencing power of Logic Pro with the killer sound set that Reason has to offer.

When it comes to sequencing applications I've always found Reason to be a bit of a pain to work with. Compared to the MIDI feature set of Logic Pro there is, just no comparison.

Saying that, Reason ships with a truck load of highly usable synths/loops and more importantly - a great work horse sample library. If you love sequencing in Logic and want to use Reasons sample and synth sound set then this could be of real benefit to you.

Step 1: Set Up A Project

The first thing to do is to set up a Logic Pro project folder. This is done by simply creating a new document (from one of Logic's templates or your own) and naming and saving it to the desired destination.

Logic creates a folder with the name you chose, inside is your '.logic' file and a folder named 'Audio Files'. Inside this folder create a new folder (Shift+Command+N) and name it 'MIDI Files'. This will come in handy later.

In your audio preferences make sure that 'Rewire Behavior' is set to Live Mode.

Next up, open Reason. As your probably well aware Reason has to be opened after Logic in order to activate the Rewire connection between the applications. Rewire allows you to route audio signals from the slave (Reason) into the master's (Logic) mixer. It also however allows you to pass MIDI signals from master to slave, which is the point of this tutorial.

This allows you play and control every aspect of Reason's rack modules from within Logic, completely bypassing the need for internal sequencing/automation in Reason.

Create a New device in an empty rack in Reason. I've created a Thor. I've selected the patch 'Big Sync' from the 'Lead Synths' folder in the preset browser. I've also renamed the Thor device to the patch name.

If you press 'Tab' you'll see that the outputs of the Thor synth are automatically connected to Rewire audio outputs 1-2 in Reason. These are fed into Logic's mixer through the 'Aux' channel strip object. Any new devices will have to be manually connected to a new output for routing into Logic.

This will give you a lot more flexibility than creating a Mixer:14 at the start and having any new device automatically connect to it and just bringing a stereo mix into Logic, this means you have to mix in Logic and Reason! No good! I like to bypass all that and put everything straight into Logic that way everything is in one place.

There are 64 input channels available in Logic with every Rewire slave application such as Reason, Ableton Live etc. To access all 64 in Reason just click the More Audio button on the Rewire output device.

In the 'Input' slot of your new 'Aux' channel select Reason -> RW:Mix L/R. This relates to Outputs 1-2 in Reason. As you can see the integration of Reason in Logic is pretty well implemented. I've named it 'Reason Mix L/R'

To show the track in the Arrange page open the Mixer panel (X) and make sure 'Aux' is highlighted blue in the view option bar. Locate the new 'Aux' channel and 'Ctrl click' it. Select Create/Select Arrange Track.

Your channel strip will now appear on the Arrange page as a track. This is useful if you want to automate it.

Now for the MIDI part. This couldn't be easier. In the Arrange page go to Track -> New. Select 'External MIDI' make sure you have 'Open Library' checked.

Pressing 'Create' will give you a new MIDI track and open the Library window. In this you will see a folder called Reason. Click it and low and behold is a list of all your Reason devices. You can see it even relabels them. No hassle, no mess, just easy!

I'll select 'Big Sync' which will the be assigned to my newly created MIDI track.

As you can see I renamed my Reason 'Aux' track to something that relates to the patch better.

So now you have one track to send MIDI to the Thor device complete with note and controller data for any parameter. We also have an audio channel for mixing the device into your Logic project complete with Track Automation and plugin processing options.

Now your all set up just hit record in Logic and record something. I've added some mod wheel as well, if I want to edit it it's all there for me in the piano roll.

It's possible to automate any parameter on a device via MIDI using Logic and Rewire. In the Documentation folder in the Reason application folder is the MIDI Implementation Chart. This gives you a list of all available parameters and their corresponding MIDI CC value. Here you can see the Thor devices Delay Feedback is assigned to Controller 25.

Just select Controller 25 in the automation drop down on the MIDI track and away you go! OK, so you have to look it up but what the hey!

Maybe a cool new feature for Logic would be to dynamically list these parameters in the down list for each device assigned to that track! Are you listening Apple!!!

Dr.Rex devices are REX loop players and if we want to sequence them in Logic we need to get the corresponding MIDI file into Logic.

Connect it to Rewire outputs 3-4 in Reason.

Create a new 'Aux' channel strip in the Environment (See Step 4). This time select Reason -> RW:3-4. Give the channel strip a name.

Create a new track for the Dr.Rex player in the Arrange page and assign it to the Reason device (See Step 5).

In Reason select the Dr.Rex track in the sequencer window and click 'To Track' on the Dr.Rex device.

Select the MIDI part that is created and go to File -> Export MIDI file. Navigate to the 'MIDI Files' folder we created in Step 1 and name and save the file.

Delete the MIDI file that was created on the Dr.Rex track as we don't need it any more.

This next part is really important!!!!

Make sure that the transport track is selected!! If you don't do this Logic will trigger notes any track that is selected (thus armed) in Reason regardless of the track your playing on in Logic. This could throw you a bit if you weren't aware of it! Every time you create a new device in Reason it will highlight the track and you'll see the red record button is on. Clicking the Transport track or any blank area below the track list will disable this.

This only applies to when your actually playing a sound via a MIDI keyboard in Live Mode. Playback is not effected by this.

Back in Logic click the Media icon and choose Browser. Navigate to your 'MIDI Files' folder. You should see you MIDI file you exported from Reason. Every time you export a new MIDI file from Reason it will be waiting right here for you as Logic will remember this path in your Project, unless you change it!

Just drag the the MIDI file onto the Dr.Rex track in the Arrange window!

Your all set to sequence the Dr.Rex loop now in Logic as well as automate it's parameters like Filter Freq (MIDI CC 74) etc. You can effect it with Logic/3rd Party plugins as it's outputs are fed to the Logic mixer. Something you can't do in Reason!!! 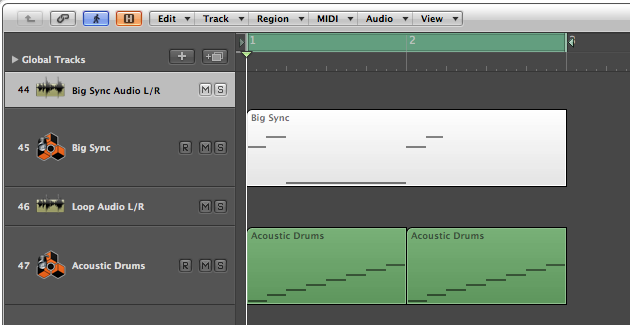 So there you have it! Logic's Rewire integration with Reason is pretty seamless. Ableton too. Just having the sound set that Reason supplies (never mind all the Refill add ons!) is enough for most people to get great sonic results. The Orchestral sound bank is worth it alone, as Logics are a bit lacking. Being able to work in Logic with the MIDI and treating Reason purely as a virtual instrument is pretty cool.

There are of course a million creative ways you can wire Reason devices together and you can still build chains of devices before you bring them into Logic. You can also automate any part of the chain by creating a track for the device in question.

You can still build combinators and have access to all the parameters, devices and rotary knobs/buttons too. All sequenced and automated in Logic.

Try giving it a go and see what you can come up with. Good Luck!