One of the most common questions I get asked by my students is 'How do I come up with a really good melody?' The answer, as with all million-dollar questions, can't be given as a simple "You do it like this..." However, over the years, I've developed a series of techniques and tips which can be used to help beginner song writers and composers come up with stronger melody lines.

I've listened to a lot of songs in my time, many of which have been composed by amateur performers and music enthusiasts. I'm sorry to say that the a lot of the song writers seem to forget about the most important element (in my opinion) - the melody - and concentrate far too much on instrument selection, production effects, lyrics and so on. The melody simply becomes an almost random selection of notes at worst, or a very dull and 'obvious' melody line at best. Without a strong melody line, a song is rarely going to make it on to someones iTunes playlist!

So, how do we transform the oh-so-common, and dare I say 'boring' melody line, to be something that is pleasant to the ear, interesting, memorable, and capture the heart of the listener? In this short series of tutorials I'm going to offer you my seven steps to writing a memorable melody, where you'll learn how to create a melody a little something like this...

The example audio above and those throughout this series of tutorials were played on piano, as unfortunately I haven't been blessed with a singing voice that's worth sharing ousite of my own car and bathroom. However, I've accented the melody notes (the highest notes) so that you will easily be able to pick them out from the backing chords and accompanyment. The example song is one I simply played within a couple of minutes of sitting at the piano, it could have turned out very differently depending on my mood, the day, the weather or whatever... but each version would all have one thing in common. They would all follow the basic steps outlined in this series of tutorials.

I shall give various examples during this tutorias. Each will show the musical score / notation, plus an audio file for those who don't read music so well. Just be aware that the score is written in it's simplest form with the accompanyment or backing being displayed as straight forward chords. Where as the audio breaks these chords out a little to provide a similar sound to that of the original example audio track that we're building up toward.


Step 1: Understand The Interaction Between The Chord And Melody

This is arguably the most important of all the tips and thankfully is the simplest to achieve for any new song writer. The essential aim is to ensure that at various intervals during the song (such as the first beat of a bar, or the end of a musical phrase), the melody note 'lands' on one of the notes that is being played in the chord. What do I mean by this? Well, if the chord that is being played is C Major, then, the melody note to feature should either be C, E or G (the triad that makes up the C Major chord). If the chord being played was G Major, then the melody note to feature should be either G, B, or D.

Lets take the example of the following common chord sequence.

(If you're not familiar with this standard method of writing chords, then C means the C Major chord, Am means A Minor. G/B refers to a G Major chord, with a B as the bass note - instead of the normal G bass note. You can learn more about chord notation here http://en.wikipedia.org/wiki/Chord_notation).

If we were to write a melody to this chord sequence, using only the advice from Step 1 in this tutorial, we'd get something like this.

Here you can see, the first melody note is E, which is played with the C chord, because the C triad is C, E, G. I could have selected C or G and it would have sounded equally correct, but this time I decided to use E. In the second bar the chord is G and I have chosen melody note G (from the triad of G, B, and D). In the third bar, the chord is A minor (A, C, E), so I've selected melody note C.

Ok, having played this back, I realize that, purely by accident is already sounds like a rather famous melody from a classical piece of music (Pietro Mascagni: Cavalleria Rusticana - Intermezzo, about 1minute 40 into the piece). Despite this similarity to an already existing famous piece of music, what is clear is that it's very easy to listen to and pleasant sounding. It doesn't sound like someone picking random notes out from the chromatic scale, there's some structure to it. That's because each melody note sits within the basic chord being played at the time.

It doesn't matter which of the notes in the chord we choose. Here's another example where the melody still conforms to the guidelines in Step 1, but using a different melody note for the G chord in the second bar. 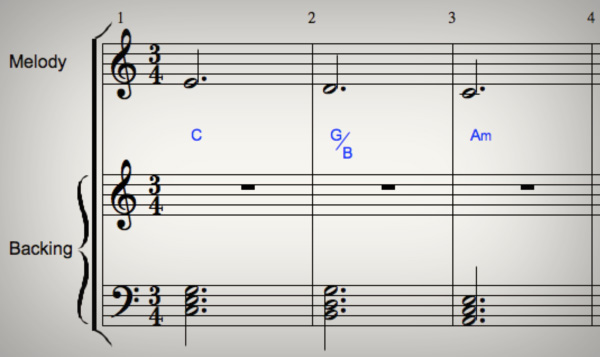 Again this works really well. (And, if you notice, this is also by complete accident similar to a very famous piece of music, Pachelbel's Canon in D Major from about 20 seconds in). As long as you understand the notes of the chord being played at any one time, you can start to piece together the 'main' or 'featured' notes of your melody line.


Step 2: Making Use Of Other Notes In The Scale

Once we've found some of the chord notes (Step 1) to feature in our melody, it's time to think about adding some melodic movement and interest to the melody line. But how do you choose which notes to add?

Well, the most obvious thing to do is work out what key signature your song is in, and then ensure you only use notes from that scale. This will ensure you don't get any 'clashing sounds' that are unpleasant to the ear. (Of course there maybe times when a melody purposefully uses notes from outside of the songs key signature, but, for simplicity we'll ignore such melodies for now.)

In the previous example, the song was in the key of C Major. Knowing your key signatures is a critical part of writing a good melody. If you don't know your key signatures, then I suggest you learn them (there are numerous websites and books to help you do this). C Major has a key signature where there are no sharps or flats; on a piano keyboard, no black notes. As such, when composing a melody for a song in C Major, we should focus only on the 'white notes' of the piano to ensure we get a pleasant sound.

Ok, so now we're going to use melody notes from the key signature C Major, either going up or down the scale, as we move around to each of the featured chord notes (as decided in step one).

I've used a fairly simple movement around the notes in this next audio example, using the tips from steps 1 and 2, to produce the melody line as follows. 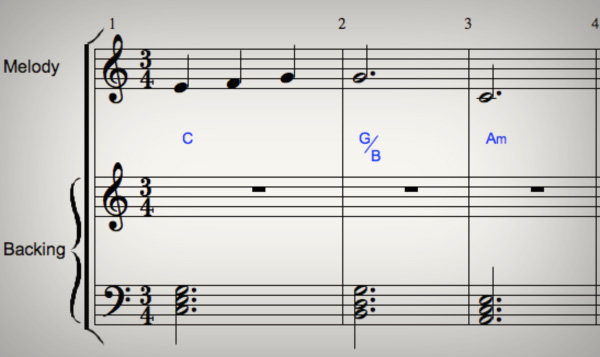 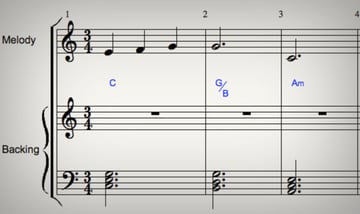 Clearly adding the extra notes from the scale as we moved from the E in bar one to the G in bar 2 has added some more interest to the melody. Again, it didn't matter which notes of the scale I played, I could have move down the scale instead, and it would still have sounded pleasant. Try it yourself and experiment a little. What is important is that I used only the notes that are in C Major (no sharps of flats) to get me from the featured melody note of E (in the first bar) to G (in the second bar).

Using steps one and two above will get you to what I termed in my introduction as an 'obvious melody'. What I mean by this is the western ear is 'trained' to readily accept these kinds of melodies over the given chord sequence and they're fairly simple in their structure. They don't jump around much and have a fairly limited technical involvement.

In part two of this series, we'll look at more techniques to add further interest to the melody line and develop it in to something a little more unique.

CompositionSongwriting
Did you find this post useful?
Yes No
Would you like to provide feedback (optional)?
Cancel Submit
Want a weekly email summary?
Subscribe below and we’ll send you a weekly email summary of all new Music & Audio tutorials. Never miss out on learning about the next big thing.
Sign up