Named after Roger Shepard, this cool effect relies heavily on psychoacoustics and utilizes the harmonic series in a rather strange way. If you have never heard this effect before then I strongly urge you to sit down the first time you hear it as some people may get slightly nauseous hearing it. This effect is like the audio equivalent of a barbers pole. If you are ready to jump into infinity then lets go!

Before you can really apply this effect you must understand how it works. The Shepard Tone fundamentally is based on sine waves. You start with a Sine wave say on note A4 which sits at 440 Hz and you have it glissando down to A3 at 220 Hz over a period of time. During the same time you have another glissando starting on A5 at 880 Hz and dropping down to 440 Hz.

If you were to repeat this cycle the glissando starting on 440 Hz would pick up where the glissando starting on 880 Hz left off. This creates the continued sensation of a falling pitch. However, if you repeat the cycle then you will quickly jump back to 880 Hz and will noticably hear it. So what do we do? In order to achieve a smooth and seemingly endless cycle we need to fade in the upper most glissando and fade out the lower most.

Here is an example with the jump back to the top at the repeat so you can better grasp the concept...

Next make sure each glissando is set to a sine wave patch. The point of using a sine wave patch is because it is so pure that lining up the harmonics on the repeat is much easier; since sine waves lack harmonics. Here is an what you should have so far...

While having these octave glissandos is cool and all, it doesn't give us the sense of a falling pitch because it is all falling evenly. To trick our brains into following the "center" pitch we need to fade the upper and lower most glissandos.

Start by making a volume automation clip for the top most glissando (the A5 gliss). Fade the volume from 0 to 100% all the way across the 8 bars we have the glissando happening. This way we will not hear the higher notes of the glissando but by the time we can audibly hear it, it will be somewhere closer to A4 before finally arriving at full volume at A4.

Next we will do the same thing to the lower glissando but in reverse. Create yourself a volume automation that starts at 100% and ends at 0. This glissando will pick up where the one above it left off at full volume and gradually fade away over the 8 bars so our ears shift focus back to the middle and upper range of the Shepard Tone.

Here is what we should have now. (Note the fade in is so it is a little more bearable to listen to.) 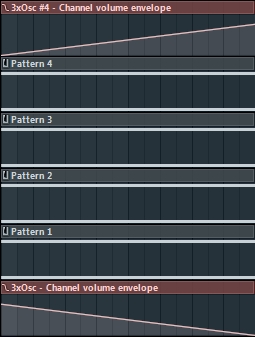 With our Shepard Tone created we need to loop it in order to get the full effect. Either duplicate all of your regions/patterns/blocks along with your automation or set a loop marker in your DAW so it goes indefinitely.

Next we need to make it sound a little more creepy to help get the full effect across. This is all a matter of preference but I recommend placing a either a flanger or a chorusing effect on the whole thing to add just a little movement and thicken it up. Afterwards a healthy amount of reverb to help smear the audio spectrum works very well with this effect.

Here is what I have come with...

You may have noticed a slight pop in the middle of the Shepard Tone, allow me to explain. This is a mathematically based effect that requires precision to sound flawless; part of this is that the sine waves must stay constant on the loop points. If a sine wave starts at null point (zero) then it must also end on a null point in order loop without any pops. However since we have sine waves moving at frequencies of 880, 440, 220, and 110, each one will have a different looping point. While we can mathematically line these up, doing so in a DAW is much harder of tempo and meter. If the small pop is extremely irritating then you are in luck!

There are plugins that will create the glissando Shepard Tone for you but you will be confined to pure tone waves. For those of you content with the DAW version then you can play around with more complicated waveforms to see how well they align and get different sounds.

One final note: Why should we have to use a glissando going down or a glissando at all? Try recreating this effect with the glissando going up an octave for a never ending lifting feeling or use rhythms and individual notes to align it to a beat. In addition, you do not need to strictly use a chromatic scale as any scale can work as long as it is consistent.

I hope you have learned something valuable from this tutorial and that this effect will come in handy. Until next time, cheers!

Mike Elliott
Having graduated with a bachelors and masters in audio and music, Mike is a well versed audio engineer, musician, and educator. From working with Grammy award winning engineers down to small start up studios, he has seen all sides of the industry, and what it takes to get the job done right. Make sure to stop by his blog Lean Audio, which covers the bare necessities and how to do audio on the cheap. From plugin reviews to heads up on free stuff, his goal is to save you time and money. Be sure to follow him on Facebook to stay up to date.
Weekly email summary
Subscribe below and we’ll send you a weekly email summary of all new Music & Audio tutorials. Never miss out on learning about the next big thing.
Advertisement
Download Attachment
Translations