In my last tutorial I looked at a few ways to add life to drum parts by using simple edits and multiple tracks. Let’s take a look at how you could use similar techniques when working with melodic synth lines.

We’re not going to be producing intense glitch based effects here (that's for another tutorial), instead we’ll be concentrating on organic.

I’m using Logic here and pre-programmed loops and samples to demonstrate the technique but you really can use any DAW or similar plug-ins here. Of course it should also go without saying that this technique can be used in conjunction with any style of electronic music.

Ok, so first things first. Let’s take a look at the collection of sounds we’ll be working with here. I’ve got a bounced melodic synth loop that contains some really nice qualities. It’s ethereal and quite epic in nature.

The synth loop with no edits

The part is coupled with a drum loop and an saturated effect. It’s a good start but before any more parts or added the synth melody needs a little work. Now if this was a MIDI part you could just dive right in and edit it but in this case we are going to manipulate the audio directly to add a little character to the part.

The original untreated parts together

The synth with other parts

At this point the effect you can hear are actually imprinted and part of the audio. In some cases this can be a nuisance but here it might help us create a few cool effects.

When performing audio edits in any DAW it’s generally a good idea to create multiple tracks. We are going to cut to the loop into several sections and you really need somewhere to put the edits. You can go ahead and create 3 or 4 new tracks. Any tracks you don’t need can be deleted at the end of the process.

With your new audio tracks in place you can start to cut out key parts of your melody. I do this using a balance of auditioning and visual feedback. Generally the useful parts are obviously displayed as distinct transient events.

With the part cut up you can now begin placing these micro edits on the separate tracks you have created. I tend to put similar or duplicate parts on their own tracks and parts that I intend to treat with similar processes on the same track as well. Don’t worry too much about how you distribute the edited audio as this can be tweaked as you go.

You can see from the screenshot below that I have split my parts up over three tracks so far. I am now ready to start applying some further editing to these new parts and then processing can be added.

We looked at using reverse audio edits in my previous tutorial about processing drums. I find that using this technique not only creates a new groove but also adds a little flair to your parts. A feeling of pace and energy is often imparted when adding short reverse sections between key sections.

I took some of the longer edits and reverse them at equal intervals. This guides you into a specific note or progression and can add a good deal of accent. In this case the changes were really subtle and organic. They actually sound as if they were there in the first place, just what I was after.

A few simple reverses are put in place

The reverse sections are added

With the reverse sections in place I wanted to concentrate on some of the smaller edits and see if I could alter the actual musical sequence in some way.

The other tracks contained some smaller edits. I felt that if these were moved around and placed carefully they could alter the melody to some degree. I also thought this may introduce an interesting new groove.

By moving duplicate parts around by half a bar, a 16th or even a whole bar, you can create interesting cross rhythms. The effect is similar to a simple digital delay line but as the part is on an independent track you have much more control over the final sound.

The only real issue with working on exact duplicates is the fact that they may clash with the originals. A way around this is to use high pass filtering and saturation to create a contrast between the edit and original audio. Combine this with the alternative placement and you should find the parts don’t fight for space.

You can hear my parts in the clip below. I also fa dec the start and end of each section to avoid clicks and pops.

Fades are introduced for smooth playback

The new smaller edits are added to the mix

The final tweaks I added were some simple automation and extra effects processing to a few choice parts. All the parts were in place but these tweaks were really just to put the icing on the cake so to speak.

I used some pan automation to make the longer reverse sections move across the stereo field. This was applied to every long reverse in the sequence. I then applied some fast synced Tremolo to a few of the other edits.

Tremolo and automation is added to some of the new edits

The synth line with effects and automation

Now that all that was left to do was mix all the new edits with the original parts.

With my new edits in place the whole thing just needed to be mixed. It’s worth taking your time here as you may of added 3 or 4 new tracks with parts that have delay, reverb and automation applied. If you have any wayward transients popping out of your mix you could use a compressed group, in this case it wasn’t needed.

All the parts are in place

The whole mix was then treated with some based limiting to make sure that there were no overs and that I was achieving the best volume possible. 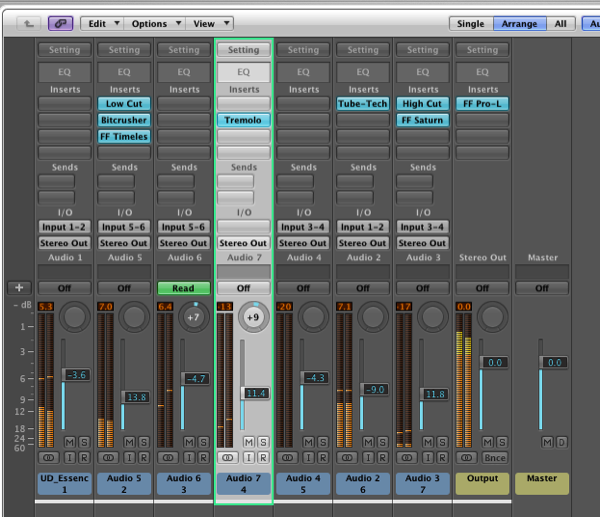 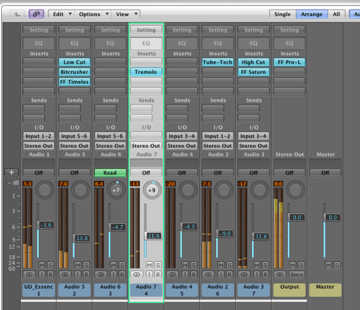 The whole mix plays back

Try this technique with your own instruments and follow my previous tutorial to use similar organic editing techniques on drums. These small cuts and tweaks can make all the difference to your parts without twisting them beyond recognition!