Synthesize a Mini Pluck with Sylenth1

Today I would like to show you a mini pluck sequence. I use this sound quite a lot in my productions, and invented the term "mini pluck". It is used in several trance songs - especially in uplifting trance - but you can use other genres as well

In this tutorial I'll show you how to create a "mini pluck downer" type patch in Sylenth. This is basically a pluck arpeggio with a filter being modulated in a random rhythm. I use Ableton Live to create it. It is suitable for giving backing support to other parts of the song. Other words it's a backing track just give some feel your tracks.

Let's insert a MIDI channel in Ableton and insert the MIDI clip. The length of the clip is three bars. Change the grid to 16th notes and draw some notes on C#4, E, G#, A and don't leave any silence between them. So as you see the notes is rising on the scale. Duplicate this sequence until you reach bar 2.3. So the sequence looks like the following. This will act as a skeleton for our new sound. The overall tempo is 138 bpm. 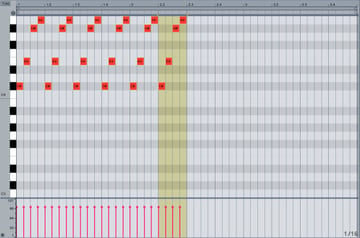 The riff was quantised and I was ready to go.

Sylenth1 is a virtual analog polyphonic VSTi synthesizer. It is a very basic tool for the trance producers. You can download the demo version from the Sylenth website www.lennardigital.com. Loading up Sylenth and initialize a preset.

Set the polyphony to one because it is just a pluck sound and it not necessary to have polyphony. First, choose the saw waveform on Oscillator 1 and set the voice to two. Put the the oscillator Retrig on. It will light in yellow at right corner of the oscillator section. The Retrigger button can be used to force all voices to start at the exact same location on the waveform every time a new note is played.

Turn the detune knob around 1.81 to give some detune effect. Next add lots of decay to the amp envelope to prevent the volume dying out too quickly, and eliminate the strong pluck so the synth which can be heard in the background. Use a moderate sustain and little bit release also.

Here is a sample how is it sounds so far:

You can hear how basic this sounds with one saw. It is not particularly interesting.

Set the filter A to lowpass. You can leave it on 24 - it has more drastic filter effect. Select Input A. Turn the cutoff knob clockwise to around 10 o'clock and the resonance to twelve o'clock. This will cut almost everything.

Give some drive control as well to be more dramatic. Set the filter control to almost the same, and set the resonance a bit lower and the keytrack more than half. The keytrack means that filters cut will follow the pitch of the notes so on the higher notes won't cut as much as the lower notes. This enables you to keep (or change) the timbre of a sound whenever higher or lower notes are played. And turn on the warm drive at last. You will hear almost nothing because the cut is too dramatic. 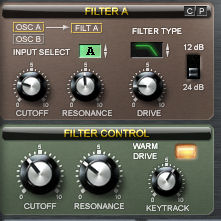 Step 4: Mod Envelopes and the LFO

Set a cutoff AB and resonance on one of the mod envelopes. Now we get to the interesting bit and essentially the process that produces the "Mini Pluck" effect. Turn the knobs next to them just little bit. The resonance can be a bit higher. Set the the decay slider to about 1 and the release as well. So you hear that a basic filtered pluck clearly. But it is boring.

Next we set the LFO. The LFO will filter in and out the frequencies during the track so it won't sound so boring. Load up a cutoff AB on the destination. Set the LFO 1 wave to random, and destination to Cutoff AB. You can experiment with the different types of waveforms, but I usually just stick with the random wave.

Turn on the free LED so that the LFO won't follow the song tempo. I set the rate very low because I just want the cutoff the filter rise and down very slowly. I set the the gain about half and the the cutoff knob around 3/4 .

Turn on the EQ section, and put the gain about 12 dB between 440-880 Hz in order to hear the mid section more clearly. It is very important to adjust the external EQ because if you apply a standard Ableton EQ the filter in the Sylenth won't impact on the Ableton EQ and will create unexpected frequency crashes. But if you are mixing the tracks use Ableton EQ to make your sound fit better with other tracks.

So this is how to be your sound sounds like after these adjustments:

Now we have the basic sound we have to add some excitement, some tension. We are going to use the sequencer to input some velocity columns for our variation to express how the filter and resonance effect is used. To do this use the velocity curves and draw some columns. Remember the velocity now controls the cutoff and the resonance. Lowering the columns make the the filter cut more high frequencies. I use this columns pattern to make the sound more interesting. It's worth mentioning at this point that you can actually create several patterns to create different resonance/filter effects. 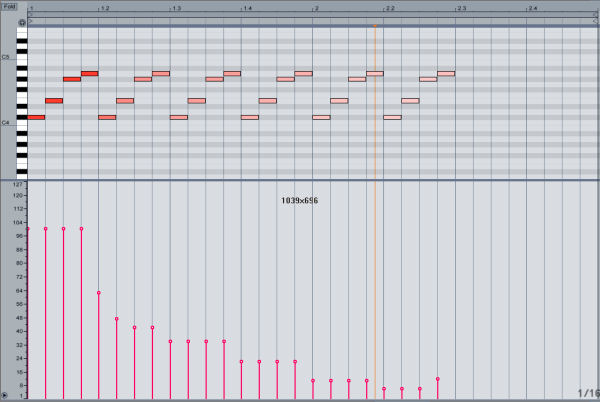 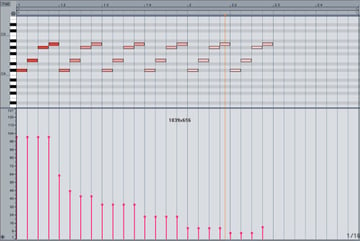 After that I drew an envelope in the clip overview section. Double-click on the pattern clip and and click the "E" icon at the bottom to show the Envelope Box. From the Envelope Editor, select mixer/volume. Switch to Draw Mode by hitting CTRL(CMD)+B and start drawing some envelopes on the Envelope Editor. The result is that the sound will quieter over time and it gives a nice fade out effect to the clip. 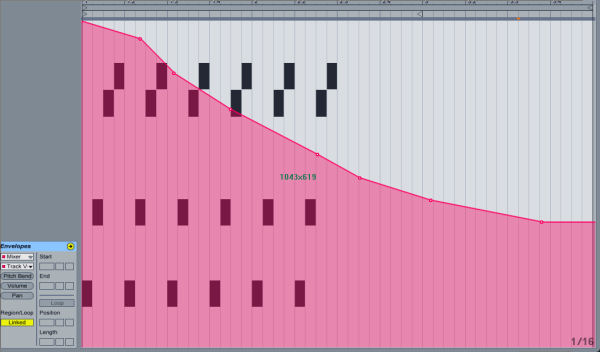 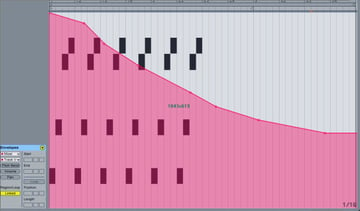 Finally I added some effects to give it a larger more spacious feel. I used a compressor as an insert effect in order to eliminate the extreme peaks and volume rises during the sequence and keep the dynamics controlled. The compressor looks like the following: 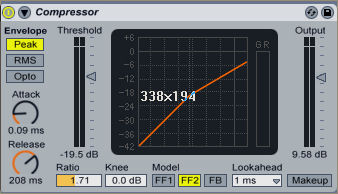 The next effect is the filter delay. Use all of the channels. The trick is that use different filter settings on each channel and different volume and different delay times. It can be a bit chaotic but chaotic not always bad. Use large feedback to hear the echoes longer. Set the the dry volume at your taste is turned around -5,4 dB.

The last effect is the reverb to make it more trancier. Trance production use lots of delay and reverb. Filter out the low frequencies at the input processing, and make the decay time quite long it gives the impression that the plucks is far away on the mix. Set the dry/wet knob around 20-29%. Take a look at the screenshot to see what worked for me.

And that's it here it is you mini pluck sequence.

This technique works quite well for me, I hope you find it useful and helpful. I've included an Ableton Play Pack with the MIDI file inside. Thanks for reading, and happy music making!