The Beginner’s Guide to Compression

Compression is one of those studio processes that is all too often taken for granted and not used to its full potential. Today’s producers think nothing of inserting compressors on every single channel of their DAW when mixing, but old school engineers had to learn to make the most of only a few units of compression—and this made us learn them inside out.

Every few weeks, we revisit some of our reader's favorite posts from throughout the history of the site. This tutorial was first published in December of 2008.

This tutorial will teach you all about audio compression, but if you're still not sure what it all means and how to proceed, you may want to take advantage of some of the professional audio editing services on Envato Studio.

Compression is the process of lessening the dynamic range between the loudest and quietest parts of an audio signal. This is done by boosting the quieter signals and attenuating the louder signals. The controls you are given to set up a compressor are usually:

Compressors come in various different flavors. These are used by engineers for different tasks and some sound far better in certain situations than others.

Voltage Controlled Amplifier compressors use an integrated circuit to give very precise control. They are less colored and suffer from very few side effects like distortion, which make them ideal for lots of different tasks. The dBx 160 is a VCA compressor.

Opto, meaning optical, describes the light sensitive circuits that control the compression amount in opto compressors. They often react more slowly than other compressor types, but this can be desirable. The famed Teletronix LA2A is an optical compressor that many producers swear by for vocals and mix bus compression. The LA2A is also a ‘leveling amplifier’ — which means it is working nearly all the time, not just when a threshold is reached.

Field Effect Compressors use transistors to emulate a valve sound with more reliability, but with a higher signal to noise ratio. They are popular for vocals and great for drum compression. The Urei 1176 is a FET compressor.

Valve compressors work in one of the three ways described above, but use valves in the amplifier circuit to get that ‘creamy’ sound. The LA2A, which is an opto compressor, uses valves.

How Set Up a Compressor

1. Whether you’re using a hardware compressor or a plug-in, setting up works the same way. Insert the compressor on the channel you want to compress.

4. The Ratio and Threshold work together. Adjust them together and see how they affect the output.

5. The attack and release controls shape how the compressor reacts. A fast attack would be useful for a rapper or anything that has sudden peaks early in the signal. Slower attack times suit mastering uses and buss compression.

7. Use the make-up gain and output control to sit the signal back into the mix without adding any unnecessary noise.

8. Setting the hard/soft knee would depend on the material. Hard knee works well for drums, bass and percussive stuff. Soft knee is more transparent and better for vocals and some guitar parts.

9. Look-ahead. Plug-in compressors often have this feature. It uses a slight time delay on the whole song to give the compressor a sneak preview of what’s coming. This allows it to catch all the peaks in the smoothest possible way. It can sometimes cause the compressor to lose its ‘character’ so don’t use it by default—only if necessary.

For every rule about setting up compressors, there’s someone who has broken the rules and made a great sounding record, so experiment.

A final word of warning—compressing on the way to your recording format, be it tape or hard disk—can’t be undone. Use compression sparingly whilst recording. Save it for the mix until you’ve got enough experience to know you’re not overdoing it.

Here is the same drum loop processed with the standard Apple Logic compressor with a variety of settings.

The clean drum loop with no compression applied.

Opto compression with a slow attack and release, 6:1 ratio and a very low threshold. This is the classic drum pumping sound.

This is the same compression as used above, but with a fast attack.

FET compression with a 2:1 ratio, medium attack and release, and the threshold just peaking.

Same as above, but with a 30:1 ratio. This sound is really getting crushed.

So what plug-in compressors can you use to emulate the sounds of the classics? Well, there are legit emulations of the 1176 and LA2A, and other classic compressors. But there are alternatives.

The Waves RVox sounds very similar to the Urei 1176 and works in a similar way. Hard to beat on vocals. 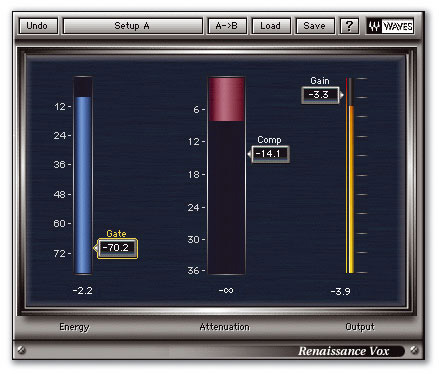 The PSP Vintage Warmer can sound just like an LA2A. It can also sound very much like an array of tube compressors, like the Manley and Thermionic Culture stuff. 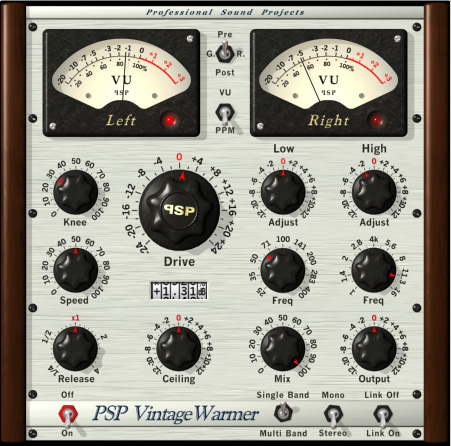 The PSP Mixpressor2 can be made to sound very similar to things like the Fairchild compressors and also the 1176. 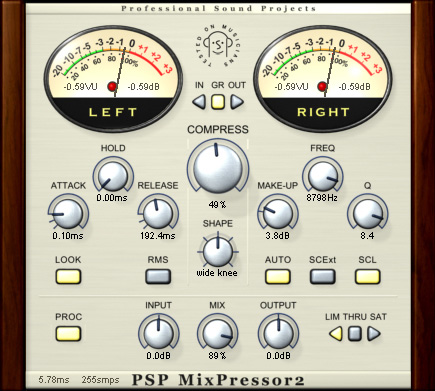