Twice a month we revisit some of our reader favorite posts from throughout the history of Audiotuts+. This tutorial was first published in January 2009.

Reason’s Combinator is a very interesting tool. It is all too tempting for new Reason users to use the Combinator as simply another instrument in which to load patches. In reality, the Combinator is far more than that, and has the ability to be the most powerful tool available to you in Reason. You may be a bit skeptical, but in this tutorial, I’m going to prove to you that the Combinator is truly Reason’s deadliest weapon.

The Combinator is a somewhat tricky device to describe. Is it an effect? Somewhat, but not really, since by itself, it doesn’t do any processing. Is it an instrument? Again, it can be, but it can’t inherently be defined as one. What is it? The Combinator is a device into which you can put an entire series of instruments, effects and other devices in order to create a master device. There are very few limits to what you can do with a Combinator, and for the most part, your only struggles will be imagination and technical knowledge. You’re probably wondering what the point of it is, so let’s see.

Let’s start by taking a look at the various buttons and elements of the Combinator. Go to Create > Combinator in your Reason project. You should now see a new Combinator with nothing in it. Let’s do a quick overview of the controls:

Now hit tab and flip around to the back. Things are a little more intense here, so let’s break down each item.

The Combinator as an Instrument

Next, go to Create > NN-XT Advanced Sampler. Let’s play a very simple melody, in this case, Ode to Joy. I chose this because it is something that even piano beginners can play, and it will demonstrate these techniques just fine. (And yes, piano prodigies, I know, my piano playing is terrible.) 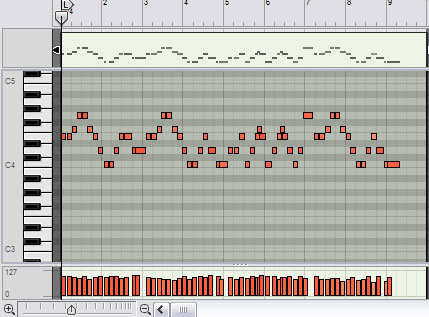 Now that I’ve butchered that quite well, let’s go back to the technical aspects of this tutorial. If we play it back right now, it’s not all that impressive. In fact, so far, there is no need for anything the Combinator has to offer.

With the Combinator selected, go to Create > NN-XT Sampler, and choose the Violin Section patch. Now play the song. What you’ll notice right away, is that the strings started to play automatically alongside the piano. This makes it much easier to create multiple instruments playing the same notes. Set this aside for now, we’ll come back to it after looking at the Combinator as an effect. 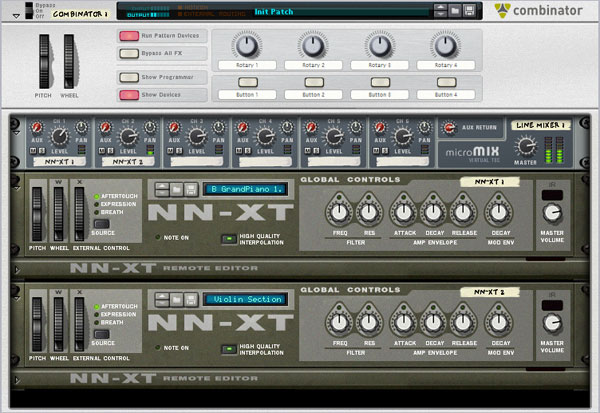 The Combinator as an Effect

The Combinator’s second value is its ability to be used as a single massive sound processing unit. You can put all your reverbs, phasers, flangers, and other effects into a Combinator and do all sorts of neat stuff. This will be a somewhat simple example, but it will illustrate what I’m talking about.

Go to Create > Combinator. Then, click in the black space in the Combinator, and create a Line Mixer and an RV7000 Advanced Reverb. Time for some fun wiring (okay, not really, but we need to do it).

Hit tab to flip around. Right now, you should see your first Combinator (the instrument one), routed into the Main Mixer. We don’t want that. Take the wires from the Combi Output in Combinator 1, and drag them to Combi Input on Combinator 2.

Next, look at the Line Mixer that we created in Combinator 2. Take a wire from “To Devices” in the Combinator, and drag it to Audio In of channel 1 on the Line Mixer. Hit tab, and flip back around to the front. Turn up the AUX rotary dial on channel 1, and the AUX return (on the right of the Line Mixer).

You might have to turn it up a bit, but you should start to hear reverb coming through. Depending on how much Reason likes the way you’re setting this up, you might not have to bother with the wiring, but the way that I’m doing it, you have to do it just this once. We can do this with more devices. With the Mixer selected, create any other devices you want. You should hear all the effects.

You can add effects and instruments in the same Combinator, in which case, all routing/wiring should be handled for you. 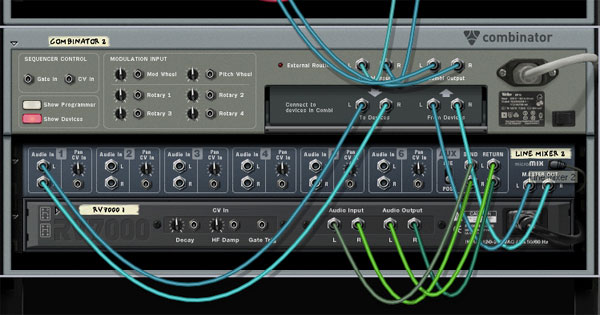 Here’s where the Combinator truly shows its power. Set the mode of Combinator 2 to “Bypass” (since we don’t care about its effects for the moment). Now, go back to Combinator 1. Remember those rotary dials and buttons that we looked at earlier? Wouldn’t it be nice if we could do something with those? Oh wait, we can! Click on the Show Programmer button. You should now see an ominous teal box, similar to the one seen in the NN-XT programmer. You’ll see a list of devices. Click Line Mixer 1.

You should now see the Modulation Routing box populated with the names of buttons and rotary dials. Click Rotary 1 under Source, and change it to Mod. Wheel, and set the target to Channel 1 Pan. The Modulation Wheel will now control the pan for channel 1 of the mixer.

Now, click where it says Rotary 2. Choose Mod. Wheel again. This time, assign the Modulation Wheel to Channel 2 Pan. Go into the Line Mixer, and initially set Channel 1’s pan all the way to the right, and Channel 2’s pan all the way to left. You should now hear all the piano in one speaker, and all strings in the other. Neat. What you’ll notice is that using the Mod. Wheel on your Combinator, or on your MIDI controller, you can control the pan. However, they both move in the same direction. We can reverse the direction on Channel 2 pan by switching the Min and Max values in the Combinator.

Click and hold on MIN for Channel 2 pan, and move your mouse up to turn it to 63. Do the same for MAX and turn it to -64. Now try toying with the Mod. Wheel. You should hear the pans move in opposite direction. Neat, huh? You can do this sort of thing for any of the programmable buttons on the Combinator, and any of the sources available. There are a whole bunch of other features in the Combinator programmer, and I’m sure there are things that even I haven’t used before. Button programming is by far the most common use. Now, let’s look at automating this.

The Combinator is similar to any other device in Reason in that it allows for automation.Right click the Combinator in the sequencer, and choose Parameter Automation, and Mod. Wheel (or whichever button you programmed earlier). Then, click the pen tool, and draw a group. Then double click the group, select the pen tool again, and draw some random points.

Now, press play. You can hear the channel automatically panning back and forth, giving a very dynamic feel to your track. There you have it, fully automated panning through the Combinator. 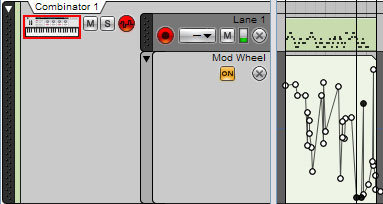 In this tutorial, we’ve explored some of the most common and useful features of the Combinator and some of the fun ways you can use it. If you’re interested in some more specific applications, be sure to check out these other tutorials on AUDIOTUTS:

Eric Shafer
Eric Shafer is a unique hybrid of talents. A computer technology student and professional by trade, Eric also has a keen interest in graphic and web design, running his own blog, Presidia Creative. He also works extensively with music and professional audio, and has written several articles for AudioTUTS+ as well.
Weekly email summary
Subscribe below and we’ll send you a weekly email summary of all new Music & Audio tutorials. Never miss out on learning about the next big thing.
Advertisement
Translations