The Making of "How We Do" by The Game

In this tutorial, we're going to learn how to recreate the beat, bass and melody from How We Do by The Game featuring 50 Cent and produced by the illustrious Dr Dre. If you’re a fan of hip-hop and hip-hop music production, you’ll be a fan of this tutorial.

As with all Reason projects, we start with a blank slate, and then we go to Create > MClass Mastering Suite Combinator.

Next, we go to Create > Mixer 14:2. This is the default template that I use for all tracks I work on. To keep organized, let’s click the tape beside each instrument and name our Combinator “Mastering” and our mixer “Main Mixer.” This just helps for workflow and organization.

Now, let’s go about setting up our project so that it’s organized, and so it’s right. Start by setting the project tempo. For this track, we are using 96 beats per minute (BPM).

Next, let’s put our metronome on. In the bottom left corner, click the “CLICK” and “PRE” buttons. This will add a metronome that is linked to our tempo, and it will give us a one bar pre-counter, so we can get our rhythm before it actually starts recording.

Also, make sure the “quantize during recording” button is clicked on, just below the play button. 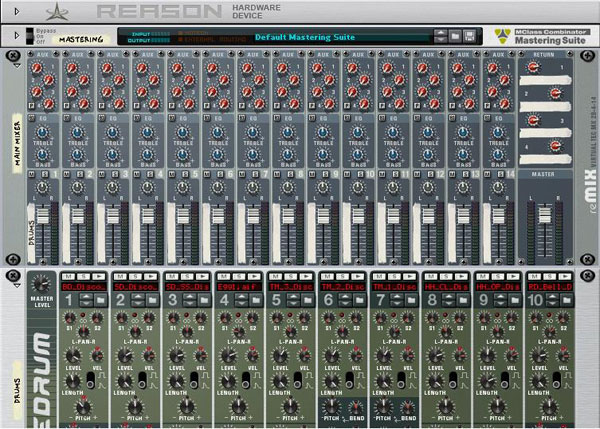 Now, the way that many producers go about their music starts with drums. So, with our mixer selected, go to Create > Redrum Drum Machine. On the side of the Redrum, click the tape to rename it “Drums”.

Depending on your Reason version, it will probably load up a drum kit. For mine, it loads up a disco kit. We don’t want it, but we can compose our drums with it and change the samples later (which is what we’ll do).

Give ourselves 32 steps to work with by clicking the arrow “Steps” until it reaches 32. Then repeat the pattern on the second set, by selecting “Edit Steps 17-32.”

We’ve got our drum base down now… or do we?

Aha, we almost forgot, let’s change our drum samples. For the sake of keeping with stock sounds, we’re going to have to make some compromises. Choose BD3_JC as our kick drum, and choose Clp_Conga as our clap. In the real song, the drum sounds that were used came from a Roland TR-80.

Now, I’m going to use my MIDI controller to play the melody line, but don’t worry, I’ll show you the piano roll when I’m done. With the mixer selected, go to Create > NN-XT Sampler. Rename it “Melody,” then load up the patch called “SynPadGlass” from All Instrument Patches > Pads > Static.

It’s a pretty simple melody line, but there are some things to note about it. First, if you know anything about the vocals of the song, you’ll realize that the first half of the melody line mimicks the vocals.

Second, you’ll notice that the melody line is rhythmic in itself. This is very important, and we’ll address it in the next step. 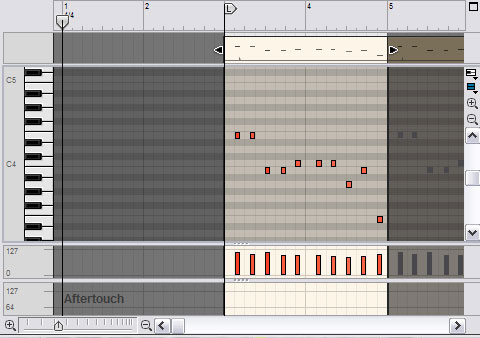 Time to lay down the strings. These strings are very important. Up until this point, all the stuff we’ve laid down has been very rhythmic, and almost “choppy.” None of the musical elements are really sustained. However, that’s about to change. Let’s load up a string patch, in this case, go to Create > Instrument - ALL Instrument Patches > Strings > ORCHSTRINGS.

These will suffice to emulate the track, though they’re not exactly the same. Now, if you were to play it right now, the strings would be a bit too wet. To remedy this, turn the Amp Envelope Release to -2.

Now play the melody line below. The first part is fine, but you’ll notice on the second half, one of the notes isn’t quantized (it falls halfway on one of the quantization lines). This is because when I played the string parts back by ear, that one note sounded a little delayed, so I moved it up by hand.

It’s not a big deal, but I suspect that Dre wanted a little less of a “programmed” feel, so he decided to add a slight edit. 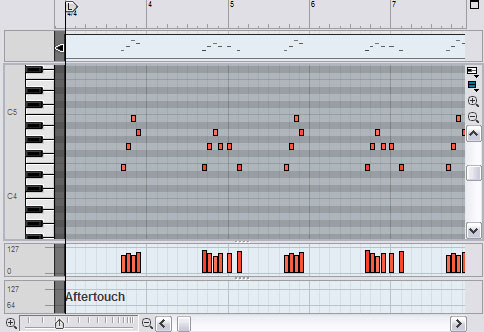 Since the bass is relatively hard to hear in the song, I’m going to have to guess at what the notes are.
It’s okay, because the effect will be pretty similar regardless, and from the perspective of teaching you, the principles can be applied to other songs.

So, play the bassline below and add it in. Default mixing values should suffice, so there shouldn’t be much tinkering involved, but feel free to make adjustments as you feel are needed. 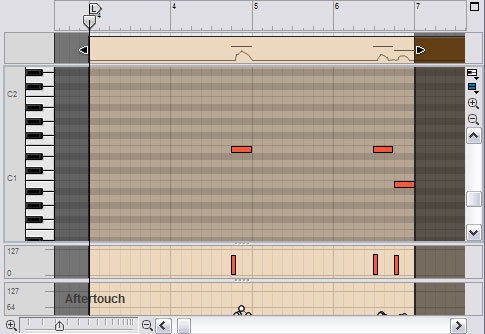 Since Reason doesn’t have stock sounds that match this song at all, and since there isn’t an instrumental version of this song out there that has these elements, I’m not personally going to walk you through the addition of them.

Other than that, the only other element that might be missing is a minor string hit to match the bass. Again, Reason’s stock banks come up empty when looking for a sound to match it. However, if you feel you have a sound patch that will suffice, simply play the bass line excluding the 2nd note (so play notes 1 and 3 which are actually the same note).

In the interest of keeping this tutorial as re-produceable as possible, I’m not going to start adding sounds from external sources. Let’s move on to constructing the track.

We need to make Reason select our pattern in the sequencer. The easiest way to do this is to select pattern A2, press Record and play, and then, while it is recording, select pattern A1 when it should play. If all went well, 2 new groups should have appeared, along with a new lane for Redrum.

Now our track is constructed, and it should look like this:

This is what you'll hear at the end of this process:

So there you have it, how to produce “How We Do” by the Game (Feat. 50 Cent), produced by Dr. Dre.
Before you complain about how the sound is not identical or whatever, remember that this is done only with stock sounds.

If you’re interested in finding the most similar samples:

Dre most likely started with a drum sequence played from a Roland TR-808, run through an Akai MPC 4000XL. Then he likely sat down (or had Scott Storch or Mike Elizondo sit down) to play through the melody line.

If I had to guess, they started with a stock sound of a glockenspiel, or possibly they started from scratch with a piano sound and built it up. Then they went to the strings, likely from a different keyboard, and so on.

However, what you should take away from this is that the thought process is the same, whether you’re remaking a track or making a new one.

Hip-hop music is about breaking each piece down and building it up as a whole. Also, beat simplicity starts with a well thought out track. Just sitting down and hitting notes won’t get you that. Think about what melody line will work well with the beat, and think about what other sounds will accompany it.

Lastly, keep organized. You never know when you might need to use the sound file again, and if you can’t figure out what you were doing, it makes things much more difficult.

To hear the original song: