The Secrets of Great Sounding Percussion in Reason

Reason is a great program for percussion, particularly with the ease of use of the Redrum drum machine. However, stock sounds won't always cut it, so in this tutorial, we'll look at some secrets for turning those stock sounds into unique masterpieces. Of course, these techniques can be applied to virtually any DAW.

Unique sounding percussion is one of the keys to any quality track. Unfortunately, stock sounds are easily recognizable, not always high quality, and are rather limited in style. You could always go buy some additional drum packages from a variety of places, but of course, then you're stuck with their drum styles. You could also record your own drum samples, but this can be a time consuming and tedious process, and it can also be costly if you don't own a drum set.

However, there are always some ways to make stock drums sound unique, and to add your own style to them. One of these ways is layering of drums, which was discussed in another AudioTUTS+ tutorial How to Layer Hip Hop Drums in FL Studio. Aside from that, however, there are a variety of other ways, which we'll look at in detail.

Getting the Most from Kick Drums

Kick drums generally lay down the base framework for your track. If it's an electronic genre, such as trance or techno, it will usually use a "four to the floor" drum style, where there is a kick on every downbeat. Hip-Hop sometimes calls for a more 'digital' sounding kick, whereas rock music usually goes for a live feel, a warmer sound. Most producers have a specific sound in mind for a track, which helps to guide the rest of the production.

The first, major way to get the most out of your kick drums, is to run a compressor on your kick drums. Let's do this really quickly. In Reason, go to Create->Redrum Drum Machine. Then, Create->MClass Compressor. Hit tab, and flip around to the wiring view. You'll notice that all your drums are now wired through the compressor. We don't want that, so instead, switch the audio input on the compressor to the output from channel 1 of Redrum, so that only the kick drum is routed. Then re-route the L/R output of Redrum back to the mixer (so the rest of the drums are still being sent to the mixer).

Now, toy with the compression, by turning the Threshold, Attack, and Release knobs down, while turning up the compression. Here's an automated drum track, where the compression slowly increases over time. Notice, the volume also drops, so you can either raise the gain, or layer this with another drum. 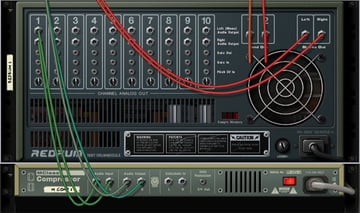 Next, make sure your kick drums aren't clipping. A lot of very 'bassy' drums have very loud low frequencies, which help to give it a nice rolling sound. However, this also tends to max out the audio, so if this is happening to your songs, add an MClass EQ to your track, and soften the low frequencies, that way the drum can still be loud, without clipping.

Remember, channels 1 and 2 in Redrum are designed specifically for kick drums. They have pitch, level, length, velocity, and tone knobs. Pitch and tone are incredibly useful for changing the sound of a kick drum. However, if you really want a ton of control over your sound, you can load up your individual kick in NN-XT. Simply locate the .wav file on your computer, and open it in NN-XT, and then use the programmer to alter the sound. You can add other sounds, you can reverse the audio, and a bunch of other things with NN-XT.

Bass and kick drums go hand in hand. When you're working with a soft or slightly weak kick sound, you can really amp it up by creating a synthesizer, loading a bass sample, and then hitting the note right on the same beat as your kick drum. You can then shorten or lengthen the attack to give it a punchier sound to match your kick drum.

Getting the Most from Snare Drums

Reason has some high quality snare drums. However, snare drums are generally a bit harder to edit, and each person likes a different snare sound. Unlike kick drums, which have a lower frequency, snare drums have mid and high frequencies, which make them stand out in the track. It's important to be careful with compression and EQ with snare drums, as these more easily alter the sound of snares than kick drums.

To create a snare roll, simply create a rapid succession of snare hits in Redrum. Then, play with the flam, and also consider adding a delay device to the sound as well, to create a stuttering effect. In the image below, I've added a delay and some flam to a snare pattern. Listen to the audio and see the results. 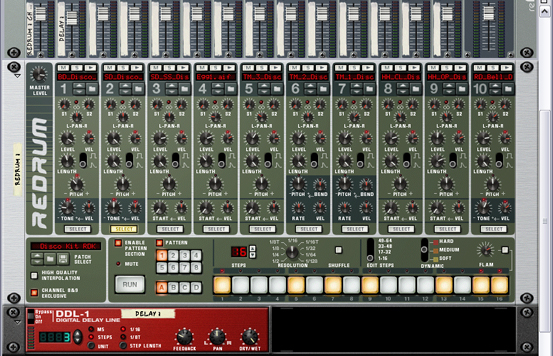 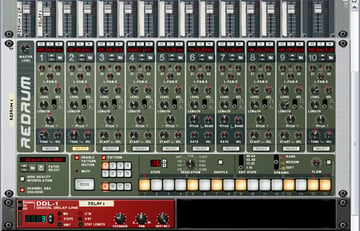 As with kick drums, Redrum channels 3 and 4 are designed to handle snare drums, and have some different parameter controls. Again, however, sounds can be loaded up into NN-XT for total control.

Synthesizing snare drums can be a ton of fun. To create a synthesized snare drum sound, simply create a synthesizer of your choice (Subtractor, Malstrom, Thor), and then give it a loud attack, with a quick release. Then, apply some distortion and reverb to give it a traditional sound. Make sure the pitch is correct, however.

As I mentioned above, EQing snare drums rapidly changes the sound. However, this can be beneficial, as you can get a more metallic sound by raising the EQ, or a more of a cracking sound by lowering the EQ. Just make sure the final version of your snare still is audible above the other frequencies of instruments in your song.

Getting the Most from Hi-Hats and Cymbals

Like the stock kick drums in Reason, the stock hi-hats and cymbals are worth using, though they require some tweaking to get a full sound. When adding a hi-hat or cymbal, listen to the sound, and make sure it fits in the proper dynamic range. If it's a bit too sharp, reduce the highs in the EQ, or use the pitch knob to reduce it. You can also tune the pitch of a cymbal down, in order to provide a fuller sound.

Hi-hats are best used on channels 8 and 9, not only due to the available settings, but also due to the Channel 8 & 9 Exclusive button, which allows the channels to interrupt each other, so the hi-hats don't conflict.

Hi-hats are often played in very rapid succession, and adding flam to hi-hats is an excellent way to create interesting rolls. However, avoid using long cymbal crashes in succession. Reason will have to cut the first crash off when the next one triggers, which will quickly max out your CPU usage and probably crash the program. Not to mention it doesn't sound very good.

Load up a cymbal in NN-XT, and then reverse it, to get a nice buildup effect. There are some reverse cymbals as stock sounds, but this way, you can create your own. Let's look at how to do this. Create->NN-XT. Right click, then choose "Initialize Patch". This will present you with a blank NN-XT. Next, hit "Show Programmer". Click the folder icon next to "Load Sample", and navigate to Reason Factory Soundback/Reason Drum Kits/Xcluzive Drums (Sorted), and choose Cr_JC.aif. This will load the file up for editing. Next, locate the knob titled "Play Mode", and turn it until it says "BW". This will play the audio file backwards. Press and hold a key on your MIDI keyboard (middle C works pretty well). Listen to it play.

I don't like that abrupt sound at the end. Let's get rid of it by turning the start knob to about 4.0%. After this, we can just play with the ADSR envelope to get the sound we want. 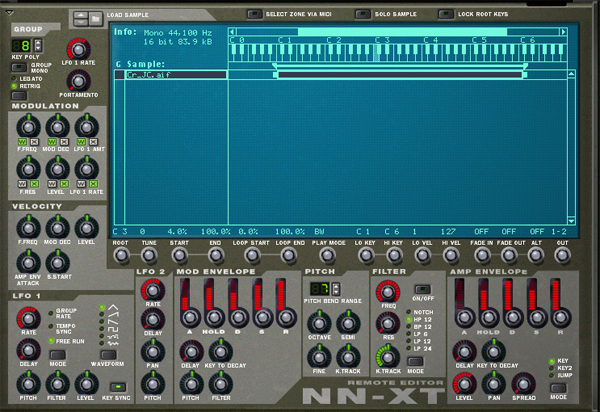 Be very careful about adding reverb to your hi-hats and cymbals. Typically, a small amount of reverb will do the trick, as larger amounts of reverb will cause the sound to become washed out and turn it into an amorphous noise.

Compression is the name of the game here. Hi-hats have different dynamics to snare drums, so you can run a compressor and really get some unique and different sounds, and they'll still stand out above the track.

In this tutorial, we looked at some of the many ways that you can enhance your drum sounds in Reason. Luckily, these techniques can be applied in virtually any digital audio workstation, as long as you have access to a compressor, an equalizer, and a sample editing plugin. Just remember the basic architecture of your music, and remember that each drum sound is designed to rest in a given frequency. Also, it is key to avoid clipping with any form of audio, but drums especially can be very noticable when they are maxing out the signal.

I hope you enjoyed this tutorial, and as always, I'll be checking the comments for requests, comments, and questions. Thanks for reading!