The Ultimate Guide to Hardware and Software Reverb

by Mo VolansAug 30, 2012
Read Time:7 minsLanguages:
Audio Production
This post is part of a series called Masterful Reverb: Everything You Need to Know.
David Bowick Is Interviewed About Reverb
Open Mic: Which Reverb Plugins Do You Use?

Although most people have a pretty good idea what reverb is, some of you may still stick to pre-sets and shy away from programming your own virtual spaces. Only a small amount of work is needed to learn the basics and achieve a truly bespoke sound through controlling and tweaking your reverb.

Every few weeks, we revisit some of our reader's favorite posts from throughout the history of the site. This tutorial was first published in August of 2008.

Before we look at the different ways in which Reverbs can be used, it’s important to understand how our various processors are working. This will help you select the right virtual device for the job in hand and also assist you when it comes to any programming that is required.

There are essentially two main flavours of Reverb plug-in that are popular amongst manufacturers right now; the first being Convolution based processors. These use a recording called an impulse response to recreate spaces virtually. Impulse responses are created by using a test signal such as a click or beep recorded anywhere and the resulting waveform or impulse can then be applied to your audio using a convolution plug-in.   Some DAWs are now offering excellent bundled convolution processors such as Logic’s Space designer, often with really extensive IR libraries.

There are, of course, a plethora of third-party products available such the ever popular Altiverb range from Audioease, Waves' IR-1 and Voxengo’s excellent Pristine space.


Remember: these processors are only ever as good as the impulses you feed them, so if you feel your collection isn’t up to scratch it might be worth hunting down some more (a simple Google search will bring up a number of good choices). An alternative is to make the Impulses yourself using apps such as Apple’s Impulse response utility (bundled with Logic Pro) or Voxengo’s. 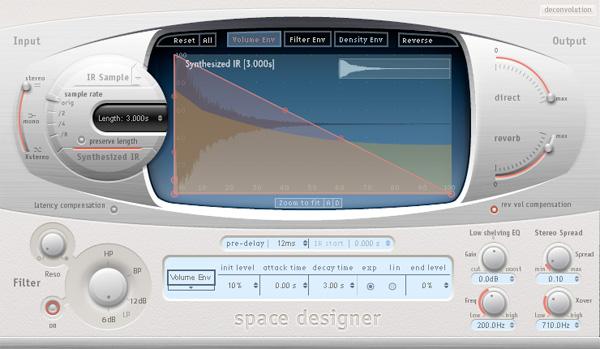 The second—and by no means less effective—type of Reverb processor you're likely to come across are Algorithmic based plug-ins. These create virtual spaces purely by crunching numbers. There is no reference to real-world sound using impulses, instead, a CPU-intensive algorithm is calculated to give you an approximation of a certain space.   This type of reverb has been around for some time and can be found in most hardware reverb units.

Some companies such as Lexicon and TC Electronic have achieved cult-like status with their studio hardware. These hardware units are often very expensive but the good news is that some algorithmic plug-ins are coming scarily close to reproducing this high end sound! IK Multimedia’s CSR award winning suite of plug-ins is a great example of hardware quality in a plug-in, while Propellerhead’s RV-7000 Advanced Reverb offers similar quality within the cost of Reason 4.

Reverb plug-ins that utilize component modelling to recreate hardware processors also crunch numbers to create their sound. Although all of these plugs can create some great results they can also hit your CPU hard, so keep an eye on those meters.

Once you have decided on the plug-in you're going to use, it’s time to start thinking about what sort of sound you're after. In the next few sections I’ll run through the basic kinds of reverb so that you can dive in and start experimenting. In future tutorials we’ll go into deep editing and discuss how reverb actually works—but for now these basics should whet your appetite nicely.

The most intense reverb effects tend to be those that recreate large spaces, with long, dense tails. You often find these in your pre-set lists and they will represent anything from halls and churches to vast outdoor spaces (generally found in convolution plugs).

When it comes to using these in the mix they can work well on vocals and percussion, but use them with caution as too many large verbs can mask dynamics and create a confused mix. Large verbs are best suited for spot FX or sounds that occur occasionally in your project. Sounds effected in this way will be set back in the sound-stage, creating distance and removing presence.

Of course, these sorts of effects are indispensable to the sound designer who uses them to actually create spaces that match a certain situation or mood.

When reverbs were first introduced some hardware units would use actual metal plates and springs to generate their effects, these sounds are often recreated in modern plug-ins and can be used for just about any sound.

These sort of effects generally (but not always) re-create the feel of a mid to small sized space and are therefore a little more subtle. Plate reverbs are perfect for drums and vocals, while spring verbs lend themselves to guitar sounds.

A gated reverb is basically any reverb fed through a noise gate. The gate is then set by the user to cut a portion of the reverb’s tail off. This results in an unnatural but very usable sound.   You may of heard this effect being used to create that classic 80’s drum sound.

You can produce huge over-sized rock snares and electronic edged drum groups using this technique. Of course, it isn’t limited to drums and can be used on any sound you like. Many reverb units supply gated presets, but you can make your own using a stand-alone gate inserted directly after your reverb.

Arguably the most useful of all the reverb types is room reverb or ambience. These effects are often very subtle and sometimes only even register on a sub-conscious level. Even though slight, it’s these small changes to the source sounds that make all difference to your overall mix.

With varied ambience and room treatments on selected sounds in your mix, different elements are given space and definition, helping you to build a realistic sound-stage and making the end result more pleasurable and involving to the listener.

Algorithmic processors will offer a vast array of room sizes and sounds, while convolution based plug-ins will give you specific data on the room used, from special drum rooms to the interior of cars and even a fridge! Experiment with these small spaces to experience the sheen they can add. 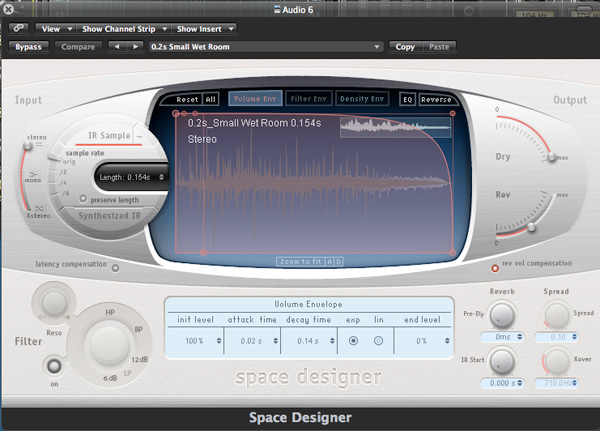 Some plug-ins will offer some really full on special effects pre-sets, with algorithmic plugs giving you nearly unlimited decay and the convolution set offering vast valleys and virtual hangars. These can be a huge amount of fun, but as with the large halls and spaces any special effects available should be used with a certain amount of self-control if a clear mix is your objective! 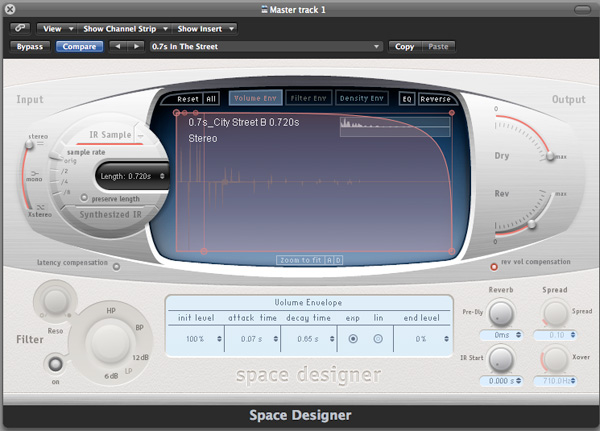 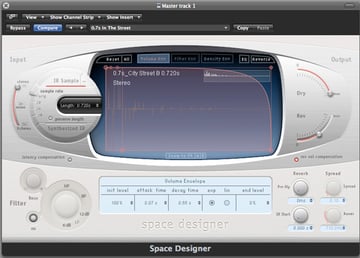 More on reverb to come in future tutorials as we start to look at deep editing of a few different reverb plugs.    In the mean-time, keep experimenting!