The upgrade to Pro Tools 8 includes many exciting enhancements, new features and plug-ins that add up to make music production easier than ever. Let's take a look at the power behind some of the best new features.

When first opening Pro Tools 8, the most noticeable difference is the new interface. The previous interface looks outdated in comparison. The dark gray is much easier on the eyes for those all night mixing sessions. In Pro Tools 8 the interface can be customized simply by holding command on Mac (control on PC) then clicking and dragging the tool section you want to reposition. 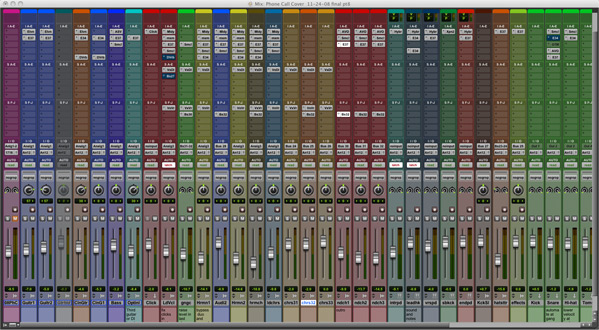 The waveform view in regions has been overhauled. Waveforms are now 16 bit resolution which makes them more detailed. Also the region background is transparent. This is extremely useful for making sure your transients are where you want them on the grid. 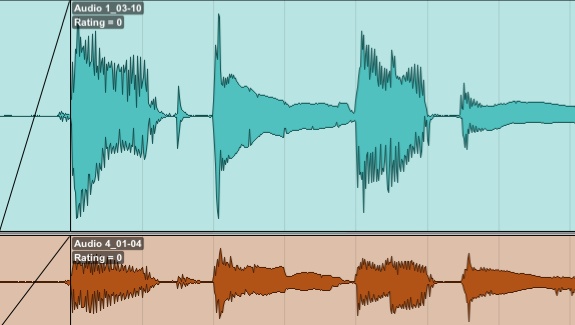 An entire session can be viewed at a glance with universe view. For anyone familiar with Adobe Photoshop's navigator panel, universe view functions similarly, allowing the user to quickly pan around a session with ease. The universe sits docked at the top of the edit window and can be resized as desired. All tracks are represented as thin bars and match the track's color. On the right edge of the universe view there is a small scrollbar as well as an arrow button to collapse or expand the panel.

Making a comp track is easier than ever with Pro Tools 8. Loop record a few takes of a guitar solo or vocal phrase and then switch the track view from waveform to playlists. Now all the recorded takes show up under the main track. Each take can then be played back individually and applied a one through five rating. Simply right click a region and select rating to rate. This is a useful feature when working on a session over a long period of time, making it easy to remember which takes were the best. To create a comp track use the selection tool to pick out the best parts of different takes and press promote (the little arrow to the left of the track). Now the selection has been moved up to the main track and you are are on your way to the perfect comp. 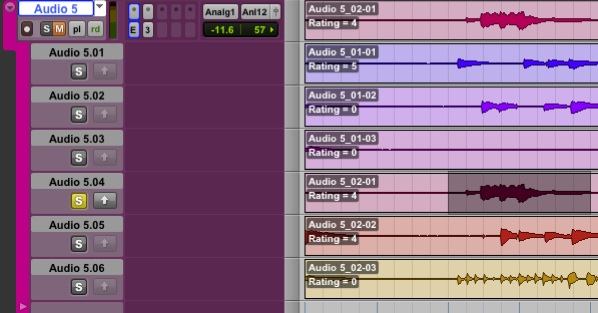 Previously Pro Tools was a little lacking in the MIDI department compared to Cubase and Logic. That has changed with the addition of the MIDI Editor window. MIDI tracks now default to region view in the edit window. Double clicking a MIDI region brings up the MIDI Editor which includes its own set of tools (including the smart tool and scrubber) independent from the edit window. Multiple tracks can be viewed in the editor at once by clicking the dots on the left hand side of the track names. On the right hand side, the pencil represents which track is editable. MIDI notes are now darker or lighter based on their velocity. The MIDI Editor can either be docked at the bottom of the edit window or be its own separate window. 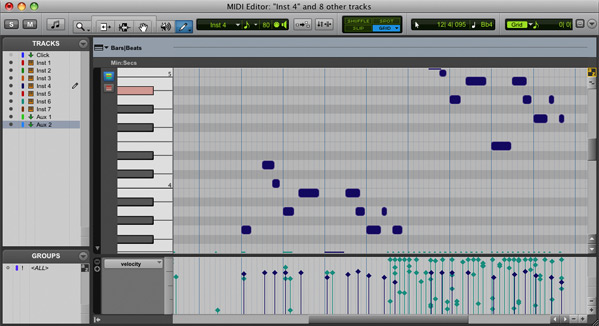 Composers and arrangers can view, organize, and even edit all of their tracks in the score editor, another new window added in version 8. Those who like working with traditional sheet music will find this feature invaluable. This window also has its own independent tool set and offers many functions of Sibelius built-in. Using the pencil tool it is easy to add and move notes in the score editor. The grid value determines the length of the note that the pencil tool creates. 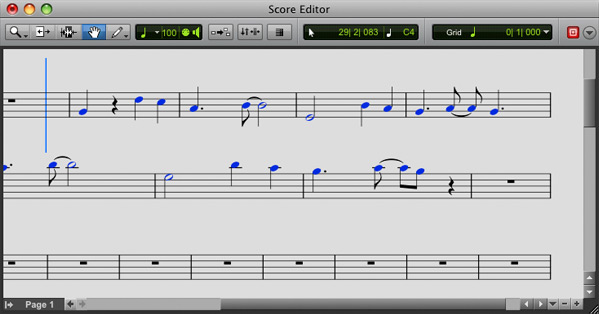 With its simple interface, the awesome sounds of the Mini Grand will become the go to plug-in for many producers. The included presets sound great; Real Piano, Compressed Dance and Underwater Life are some of the standout presets. The dynamic response is great and the eight velocity layers per key make Mini Grand feel more like a real piano. 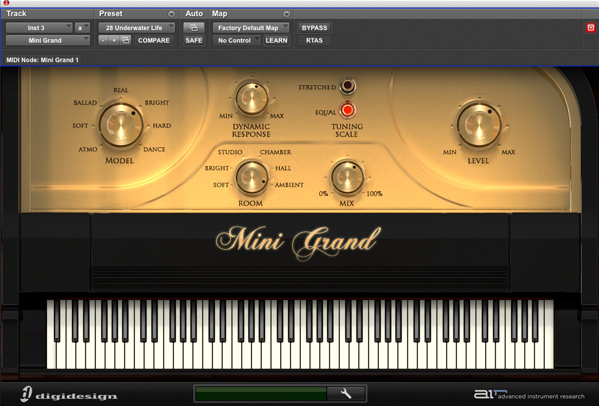 Vacuum is a great analog tube synth modeler. Being a mono synth, Vacuum is mainly for leads and basses. Vacuum's controls are broken down into ten main sections. Starting from the left side there are two tube oscillators, the mixer (with drive and ring modulation), tube low and high pass filters, two envelopes, two independent channels of modulation (each with four sources feeding one of five destinations), age and amplitude. At the bottom, Vacuum also has an arpeggiator built-in. Throw on the new AIR Multi-Delay for a great full sounding synth track. 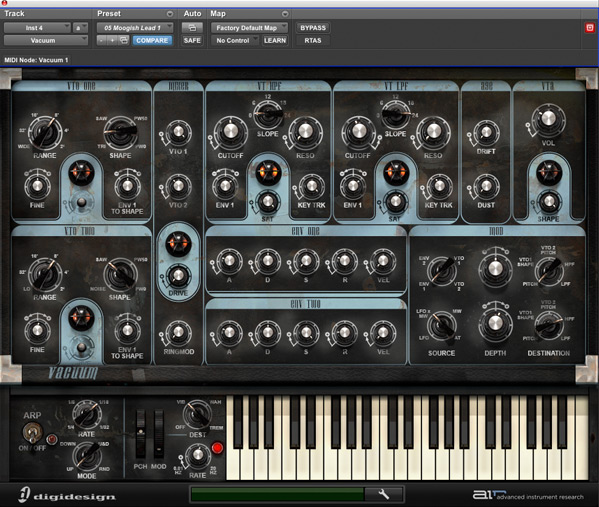 This is the second version of Digidesign's sample playback/synthesis virtual instrument. Xpand2 contains many impressive new patches totaling 1.5gb of content. Each new patch is marked with a "+" in front of the name. The interface has been completely redesigned allowing quicker access to settings that used to be spread across multiple pages. The orchestral instrument sounds really sit well in a mix. An entire composition can be created using only Xpand2. 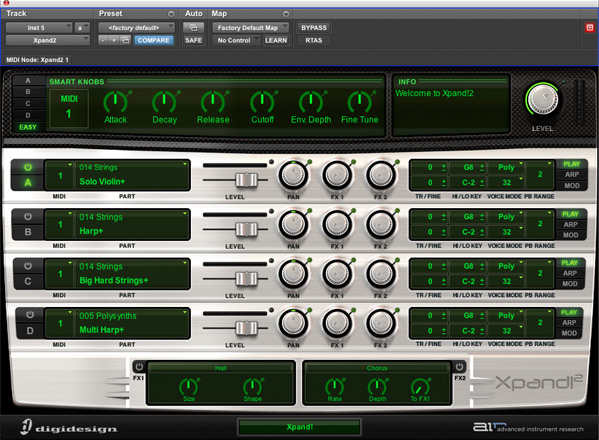 This virtual instrument is actually two plug-ins in one. It is an emulation of a Hammond organ and a Leslie cabinet. A guitar or vocal track (or anything else) can be routed through the Leslie by adding the cabinet as an insert to any track. On the organ, selectable tone wheels and the ability to dial in a key click level result in a very satisfying Hammond replication, but as any B3 enthusiast knows, the Leslie cabinet is an inseparable part of the playing style. Look behind a real Leslie cabinet and you won't find any controls, but all of the nuances you'd want to control are conveniently available in this plug-in. It's easy to adjust the Leslie to fit whatever sounds you are putting through it. 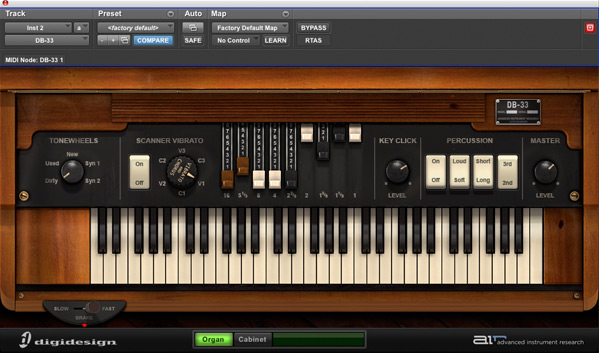 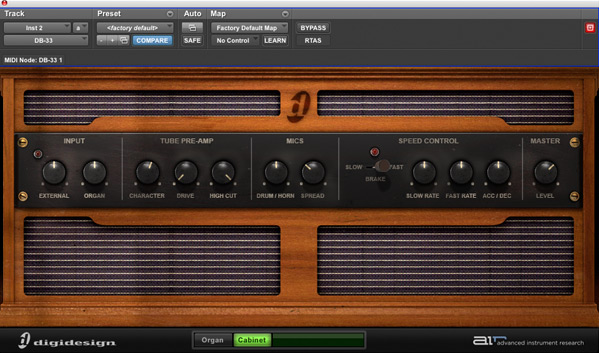 Boom is a new drum machine virtual instrument featuring ten electronic kits and a very easy to use step sequencer. The edit mode switch lets you use buttons 1-16 to pick patches or edit them. Patches can also be edited inside the grid on the top left. One great feature which may not be immediately apparent is the little screw at the bottom of the controls for each drum. Tightening or loosening this screw tightens up or loosens the sound of the drum. For example loosen the screw to make the kick sound flabby and boomy or tighten the screw to make the kick sound hard and sharp. 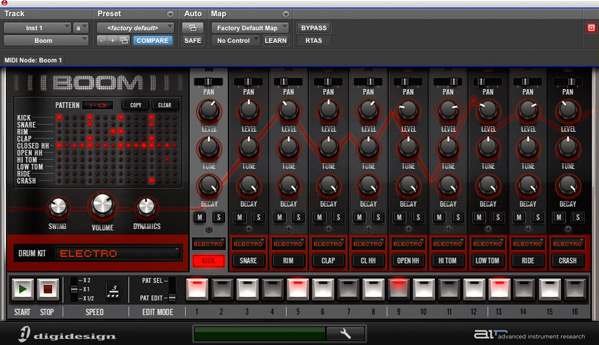 Now automation and controller lanes can be viewed simultaneously along with the track waveform view. This makes editing automation easier because not only can multiple lanes be visible at once, but the regular track waveform view also remains visible. Click the arrow at the bottom of the track's colored tab in the edit window to access this feature. To view additional lanes press the plus sign on the automation lane.

Elastic pitch is a convenient real time pitch transposition tool. This editing tool is not meant to replace Melodyne or Autotune, but is designed for the purpose of transposing the pitch in a specific area in a region in real time.

To use elastic pitch select an elastic audio region with the hand tool, and then right click the region and select "Elastic Properties" to bring up the elastic pitch window. Whether the singer missed that high note or the guitarist didn't quite bend high enough during the solo, elastic pitch is quick and easy way to the fix. Elastic pitch can also be used to alter and create variations of the melody.

Included with Pro Tools 8 are twenty new Air plug-in effects. Stereo Width widens the stereo image of a track. To get started put the delay and width all the way up to hear the effect working, and then adjust the mode and frequency bands as desired. This effect works great with techno style synth sounds to help achieve a larger than life atmosphere. 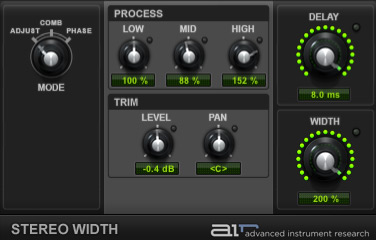 The Air Enhancer acts as a harmonic exciter. Adjust the gain of the frequency being enhanced and generate extra harmonic content by turning up the depth knob. Experiment using this plug-in to enhance the highs on a synth lead from vacuum or the lows on a kick from boom. 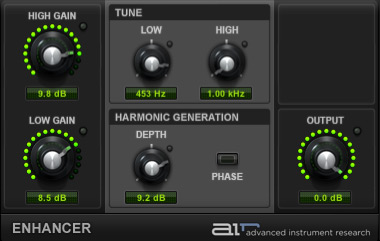 Air Multi-Delay features 5 delays, each with its own time, pan and level knobs. Also included is the ability to send one delay into another using the "From" and "To" knobs. All of the control available makes for a lot of fun coming up with new textures. 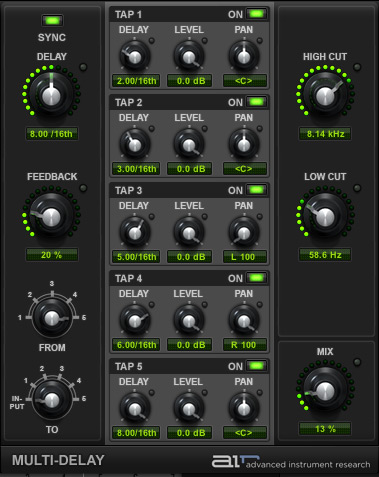 Air Filter Gate has many great patterns to choose from. The filter section provides a Low Pass, Band Pass, High Pass and Phaser Filters. At the bottom of the plug-in there is a modulation section for even more creative possibilities. This plug-in is a natural fit for dance tracks. 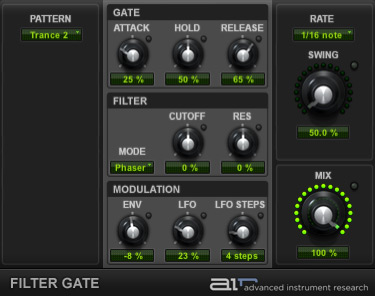 Torq is a great stand alone program bundled with Pro Tools. It does the beat matching for you by automatically syncing the beat and tempo of your tracks.

To get two songs in sync, first find two songs that are close in tempo (techno/trance songs are easiest). Next drag each song onto a deck on the top left and right sides of the interface. The first time you open the song Torq analyzes it to determine the tempo. After both songs are analyzed press play on Deck A. Then press the arrow on Deck B that says sync to Deck A. Now check that the crossfader is in the center and press play on Deck B. Both tracks should now be playing in perfectly in sync. 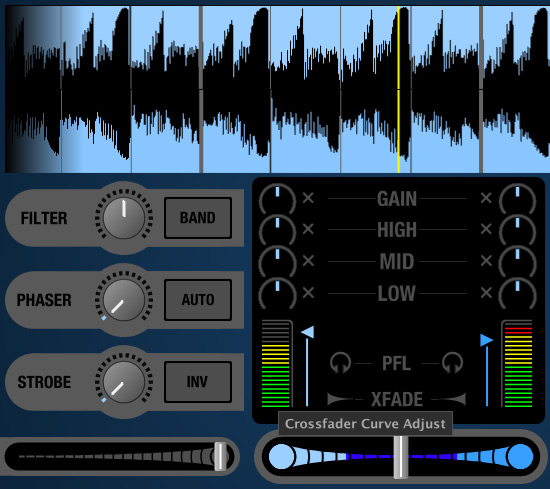 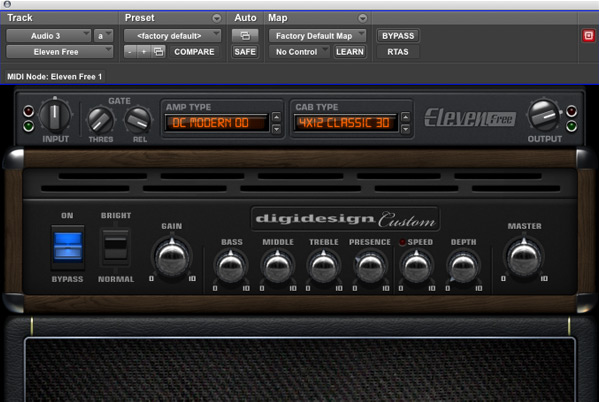 Now every time Pro Tools is launched you are greeted by a welcome screen. From here new sessions can be created, recent or past sessions can be opened and sessions can be built from templates. This makes organizing templates much easier than previous versions where there was no place to view templates. Also many starter templates are included for different workflows. At the bottom of the window, parameters for the session can be configured. 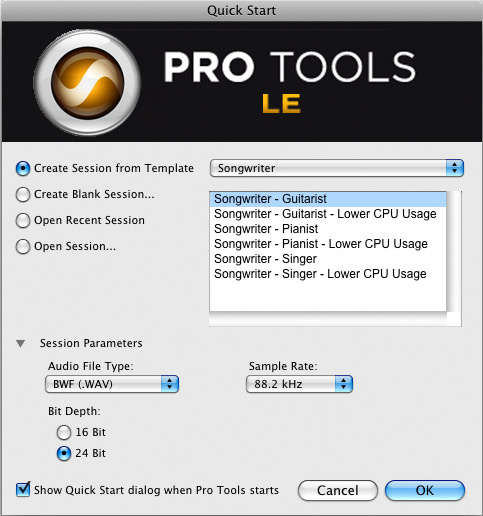 There are even more great features and plug-ins that come with Pro Tools 8. Some plug-ins deserving honorable mention are: Air Reverb, Air Vintage Filter, and Structure Free. Digidesign has upped the audio track count in a session to 48 mono or stereo audio tracks in Pro Tools LE. The Music Production Toolkit 2 further extends track count up to 64. The plug-in limit per track has been doubled from 5 inserts to 10 inserts per track. To access these additional inserts go to "View" in the menubar and select "Inserts F-J" under "Mix Window Views".

Now a session can be opened with all plug-ins made inactive by holding shift while the session opens. This allows sessions to be opened quickly when searching to find the correct one. Finally, automatic update has been added so you no longer need to remember to check Digidesign's site every few months to keep up to date.

Pro Tools 8 is a massive upgrade. With Pro Tools LE for only $149 USD, any one of the included plug-ins is worth more than the price of the upgrade. Go and grab your copy and leave 7.4 behind.

Bryan McAnulty
Bryan enjoys expressing himself through all types of media. As a musician he is a songwriter, a producer, a DJ, and a performer on many different instruments. He also works as a graphic artist, photographer, and digital painter.
Weekly email summary