Automation is an important tool for creating polished mixes. You can use it to fix problems, introduce and enhance effects, and to vary the mix levels throughout different sections of a song. If you haven’t learned to use automation in Pro Tools 8, you’re missing out on a lot of functionality.

The basic automation interface can be seen in the Edit window amongst our track controls. Underneath the record, solo and mute buttons is a dropdown menu that is, by default, set to “waveform”. In waveform view, you are able to slice, splice, move and crossfade regions, making it a very useful default view. To automate data on the track, though, we’ll have to change the setting. To do so, click and hold and the list will appear. Feel free to play with these options, but for now we’ll keep waveform selected. There’s a more efficient way of accessing and modifying automation data.

There’s a right-pointing arrow to the left of each track strip. Click on this and you’ll see a new lane appear. By default, this will be set to the volume variable and show a straight line beneath your waveform regions. The first lane will have a plus and minus icon on its left — click the plus arrow to add more lanes, and the minus to remove the lane in question.

At this stage, add two more lanes and set them to mute and pan. Your track should look something like this: 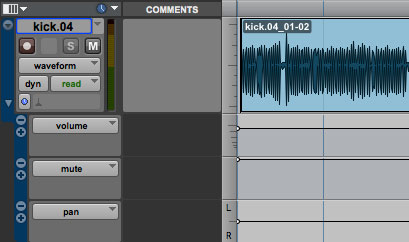 Volume, panning and mute are the basic automation variables for every audio track. Now that we’ve created several automation lanes for them, we can automate without fiddly flicking between view settings on the main track, and when we’re not automating we can simply tuck the automation lanes away with the small arrow icon used to reveal them in the first place.

Regardless of the type of pencil you select, it’s pretty much the same click-and-drag process. As you can see, I haven’t used it on the mute lane — it’s possible, but not efficient. Use the smart tool for that.

With the smart tool you select a section of the region and then hover near the top of the lane until your cursor turns into a rectangle without a line on top (sort of like a squared, elongated U). Then pull up or down, depending on whether you want to increase or decrease the value of the variable, until you’re happy. In the case of the mute variable, there are only two values — on or off — so you can only pull until it snaps into one of the two positions. In this screenshot, you can see changes to the mute lane via the smart tool:

The smart tool isn’t just useful for muting; it’s good wherever you want to accurately affect a specific section of a track, such as chorus vocals. When you want to pan your two lead vocal tracks to create a “doubled” chorus vocal while leaving the verses on the same tracks centered, the smart tool is your friend.

If you have a plug-in active on an insert you can automate just about any variable that plug-in uses to affect the sound via automation. However, unlike the basic automation variables, they aren’t listed in the drop-down by default. There’s a good reason for that: even simple plug-ins usually have a massive number of variables and if you only have the basic EQ, compressor and limiter trio on your track, you’ll still have more variables listed than is manageable.

Other programs like Logic Pro have compromised between ease of accessibility and an uncluttered list by grouping the variables of each plug-in under their own drop-down menu, but we’re not using Logic Pro, so until Digidesign implements an easier method we’ll just have to make do!

You’ll need to have access to your inserts, which will generally mean going to the Mix window as the insert list is hidden by default under Pro Tools 8. If you’re not keen on jumping between windows, there’s still a way to show the insert list in the Edit window. At the top of the track area, click on the small icon representing columns with a downturned arrow to the right of it:

Then click “Inserts A-E” to show the first five inserts on the track. If you’ve gone nuts with inserts, you can add more the same way.

Now that you can see your inserts, right click on the name of the one you want to automate and click Automation Dialog. You’ll see a window like this: 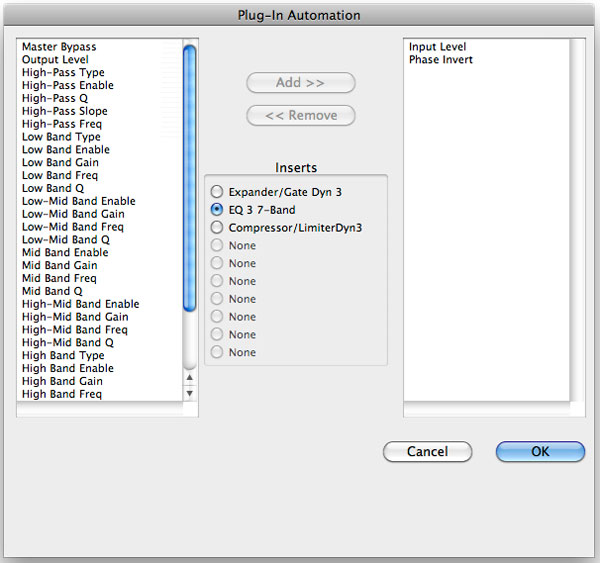 Notice that to save time, you can switch between inserts on a track without leaving this window. It’s a small touch, but one that prevents headaches.

Now add a new automation lane, click and hold the drop-down menu, and you’ll see the plug-in added to the list. Hover over the plug-in and the drop-down will expand to reveal the selections you made earlier. Once you’ve clicked on one of these, you can automate it:

You now know almost everything required to do most jobs that need automation! Automating sends, though, is a big part of almost any mix, so let’s finish off by covering this. It’s pretty simple!

Once you create a send in the Mix window (or the Edit window if you’ve added a few other columns since I showed you how to reveal your inserts), you’ll automatically see that send in your automation lane drop-down selector. Of course, it’ll have a name like “Bus 5” which is not helpful when you’re dealing with 30 tracks and somewhere between one and five sends on each. Rename the send by right-clicking on it and pressing Rename.

Now when you check your automation lane drop-down selector you’ll see the name of the send and, like inserts, hovering over it will produce an extended drop-down with variable names inside. In this case we have “level” and “mute”. Send automation is blisteringly simple once you know anything about basic automation, but the terminology is slightly different in that instead of volume, we have level, which is the percentage of the track’s main volume being sent to the bus. It’s the same as modifying the level fader on the send itself.

Automation is a useful tool with the knowledge you’ve gained from this tutorial alone. However, there’s much more to it. We may cover that at some stage in the future, but for now, explore and find out what other great things you can do with Pro Tools 8’s automation feature set!