In Logic Pro 9, Apple included a new speed fade feature which allows you to replicate the effect of a record speeding up or speeding down (at least in some stylized way). This is a common effect in modern music, and it’s worth learning this simple but handy trick.

Load up a new project and create an audio track (or you can go to an existing project and work with the audio there). Add an audio file to the new track, or record some—in this tutorial I’ll be working with a stock tune out of convenience.

Take the audio region and slice it into sections where you want a speed fade to occur. Speed fades only occur at the beginning (for speed ups) or end (for speed downs) of a region.

Your previously-whole region should look something like this now:

3. Switch from Fade In to Speed Up

Select the first region you want to work on, and take a look at the inspector. The inspector is where most of the work is done when it comes to speed fades, and it’s sitting to the left of the screen, above the channel strips. 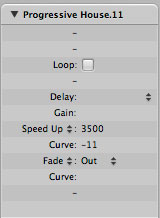 The first thing you need to do is open the Fade In value dropdown and change it over to Speed Up.

Now, double click on the blank space next to the words Speed Up and type in a number. This is where you determine the length of the speed fade. Something like 4000 will take a bit of time to come in, whereas the 200-400 range are very quick fades.

Now it’s time to set your outgoing speed fades, or your Speed Down. Change the Fade Out value to Slow Down from the drop down, and then click on the blank space next to the word Out to edit the fade speed to your taste.

Again, you can edit the curve if a straight fade is not what you’re after. 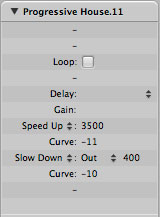 Here’s the audio we started with, and the result of our speed fades, both incoming and outgoing, on one region:

At this stage all you need to do is repeat the process on the rest of your regions. After the introductory region there’s a short two bar region, where we’ve used much quicker fades using lower values:

Here’s what it sounds like before and after setting the speed fades up:

These fades won’t sound great in the piece as a whole, but they demonstrate the difference between the longer fades we’ve been using and shorter ones.

Finally, we’ve got a long speed down fade, which I think is the closest imitation of a record slowing down:

Now that you’ve implemented the fades everywhere that you want them, you can relax and have a listen. Your track might look something like this:

Here’s what the finished effect sounds like, demonstrating both long and short speed fades in both incoming and outgoing directions: