Time stretching is often only thought of as a purely functional tool. It can be perfect for getting our loops in time or changing the tempo of a track for a DJ set but sometimes it can be utilised as an incredibly effective sound design tool.

In this tutorial I’ll give you one example of how we can use some extreme time stretching in conjunction with a series of effects processors to twist a simple vocal phrase into a dark soundscape.

You can really use any audio source you like here. It could be a bounced synth sequence, an existing effect sample or a recording of your own voice, pretty much anything can be twisted beyond recognition using this method.

I’ve opted for a vocal sample, as I tend to like the way time stretching effects vocal recordings. This probably goes back to the days when time stretched vocal effects were hugely popular in the 90’s. Trust me they work equally well if things are done right. 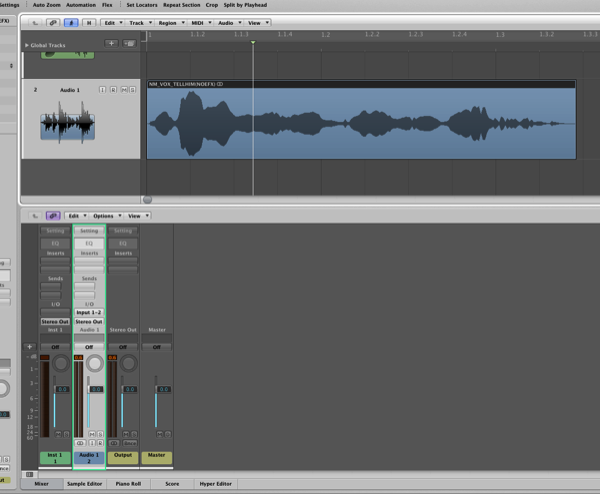 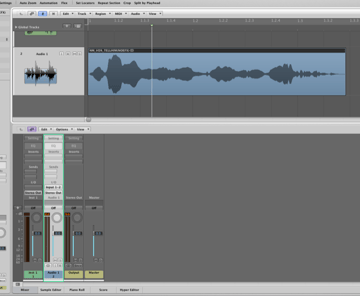 The small vocal clip plays back.

You can hear at this point the vocal is 100% dry and untreated and playing back on it’s own clean channel. Let’s get into some time based editing and start to bend things out of shape.

Every DAW handles time stretching differently so I’m not going to get into the specific of each app here. I’m using Logic, but the vast majority of DAWs handle time stretching pretty seamlessly these days. It’s more often than not just a case of dragging the audio part out to the required length.

Some DAWs (Logic included) impose a limit on the amount of stretching you can perform in one action. If memory serves me correctly Logic will limit you to a 200% stretch in one go. In this case I wanted to go further than 200%, so a double dose was required.

The first stretch is played.

And the final 8 bar stretch in action.

Obviously moving beyond the 200% figure takes your audio in a whole new direction and it’s often indistinguishable from the original, this we like. I performed a second stretch that took the short vocal sample to exactly eight bars in length. Moving to these exact measures can be useful if you want to fill a specific part of your project’s arrangement with the effect.

When you stretch a dynamic sound out this much it’s highly likely that you’ll increase the perceived dynamic range of the sound. This is only because the high and low level sections of your sound will last for much longer.

This may require some additional dynamics treatment. I’ve found that in the case of stretched vocals a heavy dose of compression, followed up by moderate amount of limiting is a nice combination.

In this case I’ve used a Waves 1176 clone followed up by Logic’s limiter plug-in. Notice that throughout this tutorial this limiter will often change position. This is simply me moving it to ensure it’s at the bottom of the effects chain. This way any wayward peaks are caught and clipping is avoided. 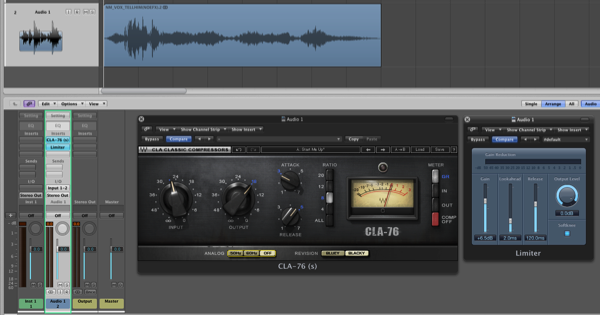 The sound is now nicely controlled and the dynamic range has been reduced to a point where the perceived volume of the sample is good throughout. We are now ready to take things to the next level and start applying some signal processing.


The signal with dynamics processors in place.

The first type of processing I applied here was some intense moderation based effects. This was for no other reason than I think this sort of effect works very well with the sounds produced by intense time stretching.

One effect that has some awesome features for this is Wave’s Enigma. It’s been around for a while but I find it unbeatable in this particular situation. There are a few pre-set patches that are excellent starting points as well.

The Waves Enigma is in place.

The low cut and modulation effects play back.

You can hear that it worked really well here but one side effect seemed to be a little low frequency extension. I rectified this by applying a high pass / low cut filter. I altered this throughout the process and ended up at around 100-120 Hz cut.

Step 5 - Finishing Up With More Processing

I find that this sort of sound can handle a whole lot of processing before it’s overloaded. I always like to add some distortion or saturation and here I’ve used Fabfilter’s excellent Saturn processor to add the grit.


The saturation adds a nice crunch.

The final effects are activated.

The delay and auto pan are added.

Following this I used Logic’s tremolo plug-in to introduce a subtle auto-pan before feeding the whole thing to the Timeless 2 delay. This was set to a pretty trippy filtered delay pre-set.

A few fades and a final inspection.

To finish up I adjusted the final limiter exported everything and added a few choice fades at the start and end of the sample and it was good to go. Try creating your own crazy soundscapes by stretching and processing your own samples.