This tutorial will make use of some interesting wiring techniques in Reason to create a vocal time stretching effect. It also goes some of the way to creating a graintable synth much like the Malstrom in Reason and should give you a good understanding of how graintable oscillators function. This tutorial assumes a basic understanding of envelopes and routing in Reason, though it shouldn't be too tricky to follow even if you are a beginner.

After you have a mixer (or not if you are Rewiring Reason) create a combinator and initialize the patch.

Step 2: Create a NN19 Sampler and a Subtractor inside the Combinator

After creating these devices initialize the patches on both, then flip the rack over by hitting Tab, then make sure the output of the NN19 is connected to the 'from devices' ports on the combinator. The subtractor doesn't need to be connected at this stage as it is only being used to trigger and modulate the NN19.

Load a sample into the NN19 by clicking the small folder button above it's main display. For this exercise vocal samples work particularly well. I have chosen this sample here:

Flip the rack over by pressing TAB. Drag a cable from the LFO output on the subtractor to the gate input on the NN19. This will cause the pulse sent out by the LFO to trigger the sample to play repeatedly.

Try changing the speed on the LFO on the Subtractor – higher speeds can give some great glitchy effects. You may have to adjust the root key control on your sampler to get the pitch of the playback correct, but in this case I actually liked the sound of the sample slightly pitched up.

Because the LFO is running all the time in the background we cannot stop the sample from constantly retriggering. This will quickly give you and anyone else in the room a headache, so let's get that fixed right away!

Flip the rack again and drag a cable from the filter envelope on the subtractor to the level input to on the NN19. turn the knob there all the way up 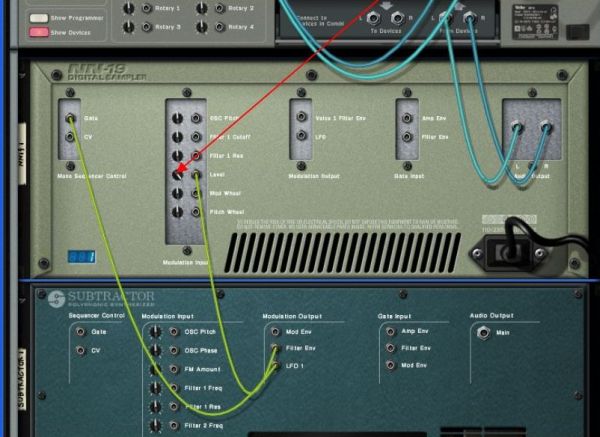 The volume of the sampler is now controlled by the filter envelope on the subtractor. This means that it will respond to your keyboard, as long as your combinator is the instrument that your keyboard is controlling.

For now we will set the envelope to zero attack, zero decay and full sustain, to give a simple on/off effect. Feel free to alter this if you would like a different envelope shape.

This is where it starts to get interesting. Using the mouse, move the ‘Sample Start’ knob on the NN19 whilst holding the key down. You will hear the sample retriggering from different starting points, giving a stuttered, ‘time stretch’ effect. You will now be able to play around with automation of this control to get some great effects, much like those commonly heard in early Jungle/Drum&Bass tracks.

We can do one more clever trick to expand on this patch, which is great if you wanted to use it in a live environment. We can use another of the Subtractors envelopes to modulate the sample start point on the NN19, saving us from having to apply automation or manually move this control.

Turn the rack around. You can drag a cable from the MOD envelopes output, but you will notice there is no input on the NN19 for the 'Sample Start' knob. This is where combinator magic comes into play.

Press the show programmer button on the combinator head unit. Now click on the text for NN19. Here we can assign controls to the 4 knobs on the combinator. Click in the empty space where it says rotary 1 and choose 'Sample Start' It should now look like this.

Try moving the rotary 1 knob – it should affect the sample start knob on the NN19.

Now, back to the envelope. Flip the rack around, you will notice that at the top of the combinator there is an input for controls on rotary 1, so you can drag a cable from the Subtractor’s MOD envelope output into the rotary 1 input. Try using a mid level setting for attack and decay on the MOD envelope. You can even see the Sample Start knob moving! If you only want the sample to play forwards and not backwards simply put the sustain on this envelope to full.

The effect we are hearing is essentially a rapid retriggering of tiny parts of the wave shape of our sample. Many sythesizers use a very similar technique in their oscillators. To demonstrate this pull up a Malstrom synth, initialize the patch and change the oscillator wave shape to 'voice:Elektronik'. When you play a note you should hear what is essentially a sample of a voice saying 'electronic'.

Try lowering the motion control on this oscillator and you should hear the voice slow down. When you reach zero the voice will remain stuttering on one tiny segment or 'grain' of the sound, much like our combinator patch.

At this stage you can move the 'index' slider left and right to scroll though the grains in exactly the same way as moving the 'sample start' knob affected our sample in the combinator patch. The Malstrom and other similar synths simply pitch up and down all of the waveshapes when different notes are played.

In theory, though time consuming you could create a sampler patch with samples at different pitches assigned to different keys and create your own graintable synth - Yet another reason why I love Reason! Here's a breif example of a jungle track making use of the combinator patch demonstrated in this tutorial: 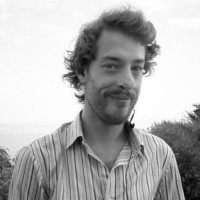 Jack Wiles
Jack Wiles is a qualified and experienced sound engineer/producer working in Nottingham, England. As well as working with bands in the studio and producing digital music on a regular basis, he also works as a sessional lecturer, delivering courses on music production for various college institutions around Nottingham.
Weekly email summary