What Baking Can Teach You About Audio Production

I was baking the other day, something I never do. I'm more of a cook than a baker, it's more creative to throw spices around than carefully measure flour and sugar. But anyways, halfway through baking the banana bread it struck me: this is exactly how you should approach making a record. Most of the steps involved in the process of baking can be translated into making a record. From careful pre-production and planning to mixing the correct ingredients, baking can teach you a lot about music production. 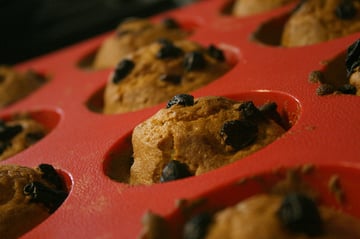 I remember reading something by Tim Ferriss ages ago and he proposed this question: What would you rather choose: a lousy recipe and a great chef or an amazing recipe and a subpar cook? I would choose the great recipe every time, because if the ingredients are wrong to begin with it's much harder to fix. But if you start with a great recipe and follow it correctly it's almost impossible to screw up.

Similarly, copy from the masters. Listen to famous and classics songs to analyze what makes them so good. Listen to the mixes on the radio, what sonic recipe is cool today? I know everyone is trying to be original but sometimes that just doesn't work. Copy the masters of yesteryear and follow the recipes that make a hit. You'll be better off than blindly creating something nobody wants to listen to.

Step 2: Preparation—Make Sure You Have Everything

“Hi, could I borrow a cup of sugar?” This sentence might work with your neighbors if you run out an essential ingredient during your baking session and you're too busy to go to the store. But you can't knock on your neighbors door and ask them if they have an extra pack of strings or a snare drum head to spare. The likelihood of them keeping an extra XLR cable or a drum stick in their cupboard is just wishful thinking. Don't press your luck.

When you are recording you have to make sure you have everything you need to make the session go smoothly. Just like baking, you need to have all the ingredients available when you start. You can't just run out and grab a pack of strings in the middle of a session. It's inconvenient for everybody. Keep extra packets of strings, cables, drum heads and the like if you are preparing for a recording session. By being prepared your recording session is more likely to go according to plan.

The first step in my recipe for banana bread told me to grease the pans I was going use to bake the bread. I wasn't sure what pans I was going to use and how much it would end up being so I said to myself, “screw it, I'll mix everything together first and then figure it out.” Big mistake. When I finally poured the batter into the pans I had totally forgotten that they hadn't been greased yet. It didn't ruin the banana bread, but the bottoms were a little stuck to the pan after baking.

When you are producing music you can't skip steps because you want to concentrate on something else. For instance, don't leave editing for later because you want to see how the mix sounds first. You'll inevitably forget about it, and only remembering it when you hear the bounced mix with odd clicks and pops and breaths in the wrong places. Do you fades and edits first, before everything. If you forget about editing now you'll definitely regret it later. Don't skip steps in the recording process, it will catch up with you.

Baking is a more careful culinary art than cooking. You have to mix things together correctly or they end up unusable. One time I was making pizza dough and I used cold water instead of warm water, effectively ruining the dough. The dough wouldn't rise with cold water so I had to start from scratch. Or I might have just ordered something from Domino's, I forget.

But the thing to keep in mind is that not everything works in a mix. When you are preparing a mix you need to keep in mind what works together and make sure nothing sounds out of place. You don't want a 80's metal solo sound in a folky pop song, and you don't want a Everly Brothers melody in an electronic piece. Those things just plain don't go together, regardless of how much you try. Sure, you can sprinkle some quirky effects and create some interest but like my dough, it has to rise. Make those effects compliment the mix, and leave the listener interested, not flabbergasted.

Step 5: Wait Until It's Done

Regardless of how impatient you are, your dough is going to take its time to bake. There's no rushing it so you just have to set a time and do something else.

Similarly, if you have been working on a mix forever then it's time to take a break. If you've been mixing for 8 hours then your ears have gotten so tired you have no idea what you are listening to anymore. Don't rush a mix, work on it and then take a breather. Come back the next day and see how it sounds with a fresh pair of ears.

If At First You Don't Succeed, Start Over and Try Again

Recording, mixing, or producing music is a lot like baking. You need to have all the ingredients for a song, keep track of what you've done, plan ahead and mix your ingredients correctly. If you don't get the best sounding mix of all time the first time around don't worry. I doubt anyone does. And I doubt anyone is a natural baker. That stuff is hard. Just like baking, if you don't get the best result the first time around then just try again. There will be other recipes to try, bands to record and music to make.