Why You Should Use Metering Tools while Mixing and Mastering

Last AES convention I met a manufacturing rep for a very prestigious equipment company. He was demoing a piece of equipment for me, showing me all the great knobs and buttons that it had to offer. Then he said something along the lines of, “We don't include a screen for these things since you're supposed to mix with your ears.” That's when I took my exit stage left. I think imposing a viewpoint like that is just plain wrong.

Obviously, you're supposed to mix with your ears, but I don't think looking at meters is going to destroy your mix.

I like visual EQs, where I can see how narrow my cuts are, and where I can visually sweep over the EQ spectrum. Similarly, I look at the gain reduction meter every time I compress something. It helps me get to where I want to go. There's nothing wrong with looking at your plug-ins to see what you're doing to the sound. Use it as an addition to your listening.

Don't just mix visually without listening. That's never going to work. Then everybody could have an amazing mix by just using those damned presets without changing a single thing.

No, use your ears, but don't exclude helpful meters your plug-ins have to offer. They're great when you're starting out. They give you a handy visualization of what's going on that's especially helpful if your ears are inexperienced.

Logic's multimeter is a great tool. It has a bunch of metering tools that you can take advantage of that work well for both mixing and mastering. Other audio programs all have some sort of meters that you can use. 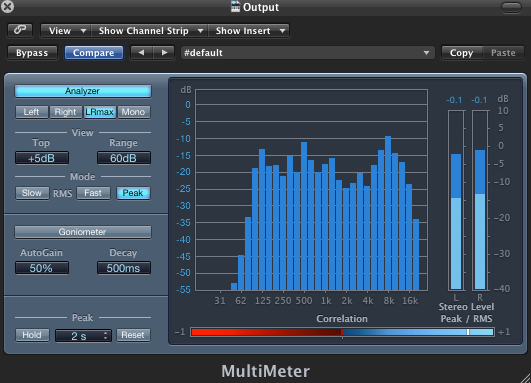 I use the multimeter as a last resort when I can't seem to figure out where the muddiness is. If the multimeter is clearly showing me an overabundance of a specific low end frequency (damn you 250 Hz!) then I'll go back and try to cut that frequency from the usual suspects of low frequency instruments, such as bass, guitars, keyboards or drums. Many times it's not actually the instruments themselves, but rather the reverb that's muddying up the spectrum so I'll go in and EQ the reverb to see if I can't fix the mud.

When I master I tend to put the multimeter after all of the mastering plug-ins I'm using. It goes on after the EQ, Compression and the limiter. The reason I don't just put it anywhere in the chain is because I need to know the final level of the song, and all those plug-ins will somehow alter the final level.

I use the limiter to make the song louder, and while I raise the level of the song I use the gain meter on the multimeter to tell me how loud the song is becoming. I try to aim for a level of around -12 to -9 dB, depending on the genre of the song. Therefore, watching the level meter closely while limiting gives me a really good idea of how loud the song will end up being.

I use the goniometer rarely, but I check it at least once while I'm mastering. The goniometer is sort of a phase meter. It tells you if your track has any phase problems. If the track stays somewhat in the middle, with no parts creating any weirdness you should be fine.

Another way to check is the correlation meter below. If the meter is close to all the way to the right, you shouldn't be having any phase problems.

The reason I say I use the goniometer more while mastering rather than mixing is that while I'm mixing, I'd rather flip the output to mono and listen that way instead of relying on the meter. Since I'm mixing I'll have more control over the individual elements of the mix. So if I flip the song into mono and something just vanishes from the mix, I know I have some phase problems. And since I'm mixing, I can go back to that instrument and fix it right then and there.

But if you're mastering, you have less control over all the elements of the mix, and you're almost screwed if the track you're mastering has massive phase problems, since you can't go back and fix it.

A very useful thing when you're trying to time your compressor to the beat of the track. And since it tells you how much you are compressing, it's a handy way of knowing how much makeup gain you need to apply so that you're at the same level as before you started compressing.

Similarly to the multimeter above, some EQs have frequency analyzers that show you what the signal looks like. In Logic you just press the button on the Channel EQ and it gives you a visual approximation of the frequencies of that signal. It can come quite in handy when your ears aren't trained enough to hear where problematic frequencies are located.

Metering is a great way to visually see what the audio is doing. Slapping a multimeter and checking the frequency range of a multi-track is a great way to see if your mix has an overabundance of some frequency or other. Making your track loud but dynamic is also a priority in these days of over-compressed masters, so you have to know how hard you're pushing your limiter and how loud you're making your mix.

How do you use meters while mixing or mastering?