Using MIDI for Inspiration and Foundation

This tutorial can be used for a variety of purposes. You can find public domain songs to use for inspiration, using the preprogrammed MIDI to create something completely different than before. Alternatively you can use the MIDI songs to create better versions of the same songs, for use in musicals, karaoke and the sort. Musicals use a lot of famous pop songs with new lyrics so if you ever find yourself creating music for musicals or karaoke versions for your friends then you can download the MIDI files as a sort of a cheat system to record your stuff on top.

Every few weeks, we revisit some of our reader's favorite posts from throughout the history of the site. This tutorial was first published in March of 2011.

The first order of business is to find a usable MIDI song. There are MIDI versions of a ton of songs online, from Phil Collins (for the drum beats) to the Beatles (for the arrangements). A quick search on Google reveals a plethora of different MIDI versions of famous popular songs that you can use as a basis to work on your own work. It's easy as pie to download the songs. Just right-click on the song you want to use and save it to your computer. 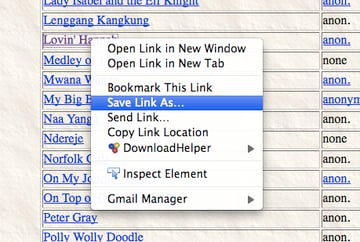 When you've found what you want/need it's time to fire up Logic (or your preferred DAW) and import your .mid file you downloaded. Just go to File>Import, a window will pop up to allow you to find the file that you downloaded. Click on it and it will import the MIDI files into your DAW. 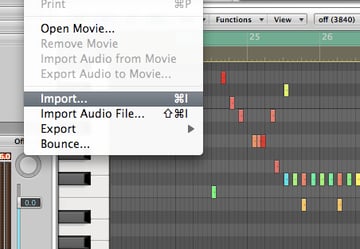 It's a good idea to know what tempo the song you are using is actually in. If you import MIDI into a session that's 120 bpm then that MIDI is going to play back at that tempo, not at the original tempo of the song you are using. So make sure that you have the right tempo selected because it's really weird to hear slow ballad sped up by 60 bpm.

Step 3: Finding What You Want

Depending on what MIDI file you end up downloading from the Internet results may vary. Shop around for different versions because when you import the files into Logic (or any other DAW) it might be easier to separate what you want and discard the rest.

If all the parts are together in the same MIDI file you might end up having to fish through all the different lines to see which ones you really want, and consequently not saving you any time and just causing frustration. So make sure that when you import the stuff into your DAW the .mid file separates itself into different tracks such as rhythm, drums etc. It will make everything easier. 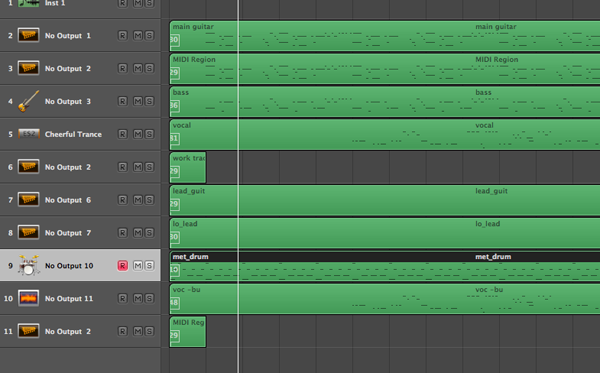 In the picture above you see how each part gets its separate channel. Chances are most of the MIDI files you download will do this. From this point you need to find what you are looking for.

If you only need the drums and bass and want to rerecord all the guitar parts again then it's easy to find the clearly labeled drum and bass parts for the MIDI files. But some files you download might not have such nice labels and it might take a little time to figure out which is which.

General MIDI sounds pretty bad. But if you have nice drum machines and synths you can easily discard the General MIDI sounds and convert them into something cooler. Use your own software instruments and tweak the sounds until you are satisfied with the results. Create a new software instrument channel and move the MIDI performance to that channel. Now, if you have great drum programs such as BFD or EZDrummer you can take the MIDI performance and make it sound much better.

You also need to make sure all the MIDI notes are in the right place. For instance, in the screenshot below the imported MIDI beat had the kick drum pattern below the actual trigger for the kick drum. I had to select all of the kick drum notes and then move it to the corresponding kick drum trigger, which in this case was C1, or the lowest octave of C in the piano roll that my drum synth uses.

Step 5: Adding Your Own to the Mix

If you only want the foundation of the track, say if you are working on a musical score and just need the drums and bass you can discard all the other tracks, make the drums and bass sound good with your synths and then record on top of that. It's really hard to make a guitar synth sound convincing so you are probably better off having someone record the track over your rhythm foundation.

For karaoke or musical numbers you will probably leave the vocal out, or maybe just record the backing vocals for some added oomph on stage. By creating your own version you can change the lyrics, the language and anything you really want. Your synths and instruments are always going to sound better than the General MIDI sounds.

There you have it! Whether you need to create musical numbers from pop songs or want to know how your song sounds with a particular famous drum groove you can easily answer those questions by using general purpose MIDI files found on the Internet. Find the songs you need to use easily on the various databases on the Internet, import them into your DAW and fool around with them.

Depending on how well the MIDI was done your tweaking might vary. Some files come with clearly labeled instruments so you are good to go in five minutes. Others take a little sifting through.

Finally, when you've found what you're looking for you can record on top and eliminate the lame sounds that General MIDI gives you. Use your synth and your studio to take a comically sounding MIDI song to the next level.