Quick Automation Access has been around in Logic for a while and basically lets you assign any MIDI hardware controller to dynamically write Track Automation. The advantages of this are that it’s a lot more intuitive to mix and write automation or controller data with something you can touch like a fader or rotary knob while your hearing it in real time.

I’ve always found that drawing automation data can be a bit of a sterile process and in some cases really time consuming as opposed to real time tweaking. It’s always - Draw -> Listen -> Draw -> Listen, etc. Sometimes you just need something physical to move. Hopefully this tutorial will get you into the habit of using this real time method and show you there’s some cool and creative ideas to be had as well. Let’s get started!

Everyone owns a MIDI keyboard, am I right? If you do then you already have the means to write automation on the fly. This first example is going to show you how to assign your keyboard’s modulation wheel to write some simple volume automation. 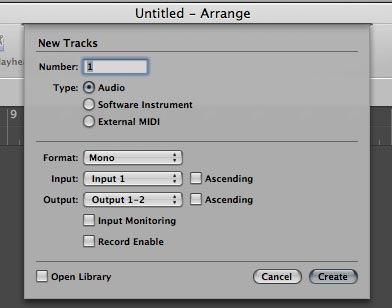 You should now see the Automation Preferences dialog box. To assign your mod wheel press ‘Learn Message’ and move the wheel from top to bottom. This calibrates the minimum and maximum values of the mod wheel.

When you’ve done this you should see a button that says ‘Done’. Press it!

Logic will now convert the mod wheel or MIDI Controller 1 into Logic’s native automation data. Logic will also turn on Quick Automation Access for you. You can turn this on and off using the keyboard shortcut Control-Option-Command-A.

So let’s test it out! Select Audio 1 in the arrange view and press A to view Track Automation. By default ‘Volume’ will be selected.

Change the automation mode to ‘Write’.

Hit ‘Play’ and move the mod wheel. You should see your movements being recorded. Press Stop.

Change the automation mode to ‘Read’ and play back what you’ve done. So it’s not Sgt Peppers, but you get the idea!

You’re now free to automate any parameter using your mod wheel by selecting from the drop down menu on your track.

Things to Be Aware of

By default Logic will put the Automation mode into ‘Touch’ when you stop. You can change this to any mode you like in Automation Preferences and I’d recommend changing it to ‘Read’ as it’s easy to forget you’re in ‘Touch,’ which will overwrite your recorded automation.

Also remember your mod wheel is unavailable as a MIDI controller until you switch off Quick Automation Access.

One of the only limitations is that you can only record one parameter at a time. 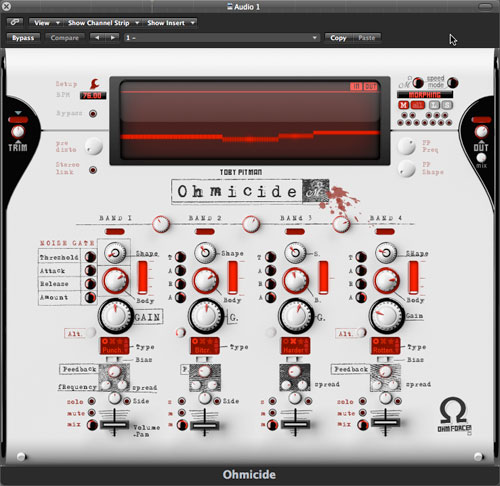 Ohmicide has a really cool feedback parameter for each band so I’m going to play with that and see what happens.

As you can see I’ve automated four parameters and a send to a filtered delay and got quite an interesting idea going. Your automation doesn’t have to be perfect or quantized, in fact this is what adds character. If it sounds good, it is good. Don’t get bogged down in making sure everything lines up visually as this can mean your using your eyes and not your ears to make music!

Also, when you automate like this you never know when that perfect mistake is going to happen and it can sometimes lead to a more interesting idea than what you set out to do. You can always edit the nodes manually afterward if they’re not quite right too!

If you don’t like the moves then you can also always delete and start again by going to Options > Track Automation and choosing one of the following options.

Why Stop at a Mod Wheel?

Literally anything that outputs a MIDI signal can be converted to automation. MIDI messages include Note ON/OFF, Note Velocity, controller data like expression/breathe control, pitchbend. Imagine using a MIDI Theremin to automate a Whammy Pedal in Guitar Rig! How cool would that be? Let’s look at a couple of more creative ideas for these controllers.

For our next example we’re going to use a Sustain Pedal to produce a rhythmic panning effect (bet you never thought of that!). The reason a sustain pedal works great for this is it only outputs two values, On and Off. In MIDI terms this means a value of 0 and 127 transmitted via Controller 64. In automation data this will translate to hard left and hard right when assigned to the Pan parameter. Let’s set it up. 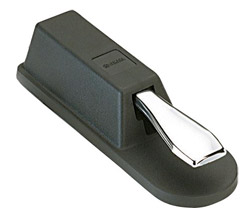 Open Track Automation Settings and press the Learn Message as before. Depress and release the sustain pedal to assign its minimum and maximum values. Press Done. I’ve recorded a chord sequence using a Pad from Logic’s presets—do the same, as it doesn’t matter what it is for now. Here’s mine.

Now make sure Track Automation view is on by hitting A. Now select Pan from the Track Automation drop down. Put the track into ‘Write’ mode and hit play. Tap out a rhythm on the sustain pedal. Here’s what mine came out like.

To do this effect from scratch with a mouse would take a while as you’d have to figure out the rhythm as you went and draw it all in. Using the pedal it’s pretty much instantaneous as you’re physically delivering the rhythmic idea as you have it.

When dealing with time based effects like this, accuracy is more of a factor, so chances are you might have to clean it up a little. Using the pedal can take a bit of getting used to, so here’s a really good tip for dealing with this block type of automation (especially Mutes or Bypasses). Hover over the recorded automation and press Control. A menu should appear. At the bottom is a selection called Snap Automation. Click it. This works the same way that objects snap to beat divisions but for automation nodes.

Holding Shift, select the nodes in question and drag to a beat division. The nodes should snap to it. If you want them to snap precisely change the ‘Snap Offset’ in Automation Preferences. By default this is set to -5 ticks.

One for the Guitarists!

One thing about Amp software like Guitar Rig 3 and Amplitube 2 is that without the (rather pricey) hardware controllers, such as Rig Control and Stomp (for Amplitube), it can be a real pain to access the pedals like the Wah Wah, Whammy Pedal and Volume pedal while you’re recording your parts. Not any more!

To get around this problem I use a Roland EV-5 Expression pedal plugged in to my MIDI keyboard. I would thoroughly recommend spending money on an expression pedal and they’re not very expensive (M-Audio’s is about $40). They are totally indispensable once you have one. They also double nicely as a Wah/Whammy/Volume pedal when assigned to Quick Automation Access.

Let’s set up a Wah Wah in Guitar Rig 3. The same technique applies for Logic’s amp simulator. Just add a Fuzz Wah after it.

Open Track Automation Settings and press Learn Message again. Sweep your expression pedal (if you have one) from top to bottom to assign it’s minimum and maximum values. Press Done.

Create a new audio track. Open up Guitar Rig and pull up a basic amp preset and drag in a Wah Pedal.

Arm the track for recording. Choose Wah Wah Pedal from the Track Automation drop down. Set the automation mode to Write and hit Record.

The result should be your recorded audio and your Wah Wah automation. 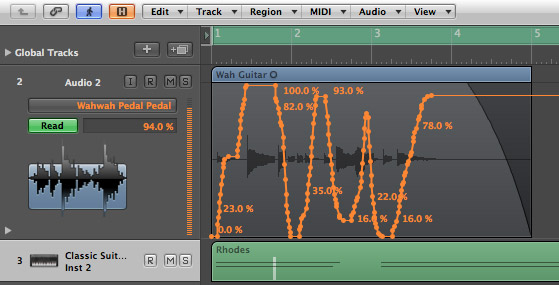 Why not try a Flange Wah by assigning the pedal to Flanger frequency? Change the speed of a Leslie speaker all in real time while you record? A really cool one in Guitar Rig is amp Sag and Bias. You’re also not limited to traditional amp software. You have all your other plugins to play with. Bitcrushers, Logic’s Spectral Gate plugin, filters, the list goes on.

Choosing the Right Tool for the Job

When you’re doing certain automation tasks it can help to use the hardware equivalent of the virtual object your moving. For instance, riding a vocal is more natural on a hardware fader (as you would do on a mixing desk) than an expression pedal. Similarly, tweaking a soft synth’s filter cutoff feels better on a rotary dial.

I’d recommend investing in a controller keyboard that has a wide range of hardware controllers. There are plenty about that shouldn’t break the bank too much. My M-Audio Trigger Finger is always close by as it has faders, dials and buttons. I’m also free to assign any MIDI controller value to any hardware feature using the Enigma software editor that comes with it.

Sometimes Track Automation is your only option for accessing some Logic and third party soft synth/plugin parameters. It’s also really easy to see all your automation data in the Arrange window and keep track of everything. Some synths in Logic, like Sculpture and the ES2, allow you to use MIDI controller assignments which can be mapped to any parameter and there are enough for most tasks.

Most descent third party soft synths have a MIDI Learn function that will allow you to map any MIDI controller to any parameter by simply moving the hardware controller you want to assign. Of course, you can record multiple parameters at once but most times you have to take note of the controller numbers the hardware is transmitting as rummaging around in Hyperdraw trying to find lots of different controller data can be a pain.

Obviously something like a Mackie Control setup is the holy grail for being hands on with Logic, just as the C|24 or Icon is for Protools. Unfortunately, these are well over most people’s budget and space restrictions and just plain overkill for most people’s needs. We can all dream, though!

At the end of the day what matters is what’s right for the job. Quick Automation Access gives you the option to tweak any parameter in Logic via a hardware MIDI controller and that’s good enough for me—for now!

Well I hope you’ve enjoyed this. See you again soon. Now where did I put that MIDI Theremin?